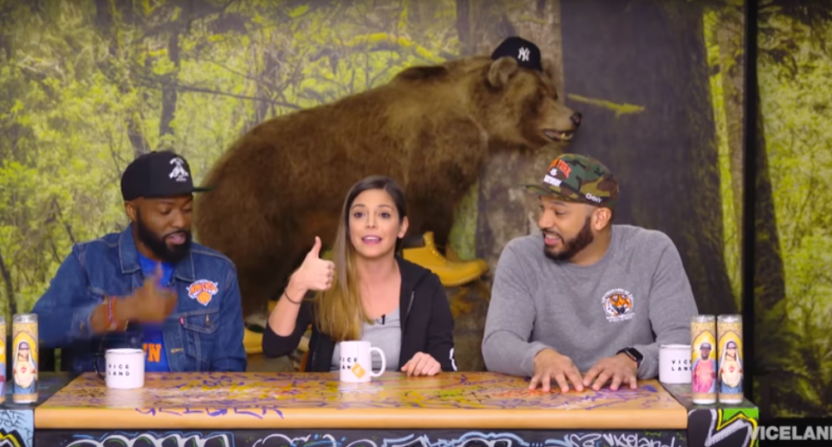 The latest test for ESPN and politics comes not from social media, but from an appearance on Viceland. ESPN personality Katie Nolan was a guest on Desus and Mero on that channel this week, and responded to a joking comment about the thumbs-up being a white power hand sign because of President Donald Trump’s repeated usage of it with “That’s because he’s a fucking stupid person.” Here’s the video:

This led to a whole lot of media wondering if that was a violation of ESPN’s social media policy, including Michael McCarthy of The Sporting News. It led to a whole lot of Trump supporters yelling at ESPN on Twitter. And it eventually led to ESPN issuing a statement calling Nolan’s comments “inappropriate,” as relayed by Kyle Koster of The Big Lead:

ESPN statement on Katie Nolan: “We have looked into the totality of Nolan’s comments, they were inappropriate and we have addressed it with her.”

This is understandably going to bring up comparisons to Jemele Hill’s September tweets saying that Trump was “a white supremacist who has largely surrounded himself w/ other white supremacists” and “an unfit, bigoted, incompetent moron,” which ESPN eventually addressed in a similar statement:

The ESPN response here probably isn’t going to sit well with anyone. Trump critics will point out that the president has regularly been called “stupid” by everyone from New York Times to Chicago Tribune to Foreign Policy to CNN op-ed contributors to late-night hosts to his own staffers (anonymously in the new Michael Wolff book), that there haven’t usually been consequences for that, that Nolan isn’t expressing her views on an ESPN platform or even on social media platforms (which ESPN’s no politics policy is focused on), and that it seems silly for ESPN to bring in opinionated personalities like Nolan to try and make a splash with younger demographics, then tell them their opinions are “inappropriate.” Trump supporters will question why there wasn’t a suspension or a firing for this, with some even trying to equate it to Curt Schilling’s dismissal after anti-transgender comments. And no one will be happy.

That speaks to the larger issues ESPN is facing in 2018. Everything any of their commentators say is seen as evidence of the company’s politics, whether that’s fair or not, and their corporate response to any political issue generally winds up alienating all sides. They’re trying to attract and retain viewers by having personalities with strong opinions like Nolan and Hill, but they don’t want those personalities to touch on anything that could be possibly controversial politically. The ideal pundit for them at this moment is probably Stephen A. Smith, regarded by some internally as an “absurd character,” who regularly says ridiculous things and gets attention for it, but not usually in a way that brings any sort of political attention to ESPN.

But while Smith may be able to largely stick to sports (and even he doesn’t always do that, weighing in on everything from Marvin Lewis and race to marijuana), that’s not a blueprint that everyone can follow, especially in a world where sports are so intertwined with larger societal and racial issues. Even sticking to sports can draw a whole ton of backlash from particular fanbases, as we saw with the latest ESPN-New England Patriots controversy Friday. ESPN is going to attract controversy in 2018, for sports and beyond, and plenty of their commentators are going to occasionally anger people, over sports, social issues, or politics. The corporate response to the Nolan incident suggests the company isn’t thrilled about that (although not enough to actually hand down a suspension), but that kind of response has its own problems and makes no one happy.

We don’t yet know what form the next ESPN political controversy will take, but we know it’s a matter of when, not if.