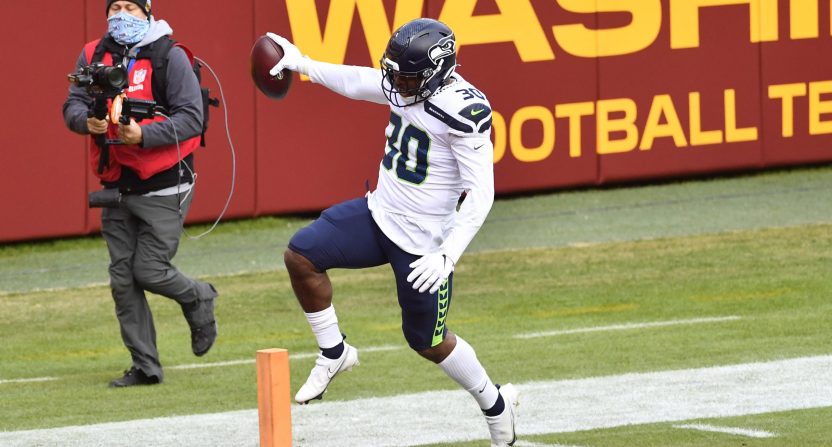 Fox viewers watching Sunday’s NFL game between the Washington Football Team and Seattle Seahawks might have been surprised to get such a clear view every time a touchdown was scored. That’s because Fox decided to break out a special handheld 8K camera for some seriously clear visuals.

This camera angle is insane ??

The high quality comes courtesy of a handheld camera that the broadcast crew has dubbed “The Megaladon.”

The awesome on-field shots on FOX’s broadcast of #Seahawks–#WashingtonFootball Team are courtesy of this contraption the crew nicknames “The Megalodon.” Here it is. And here’s Mike Smole, who is operating it today. He calls it a “poor man’s Steadicam.” We should all be so poor. pic.twitter.com/RWuYjeaBCe

Specifically, it’s a Sony DSLR camera on a gimbal that includes a joystick to make it even easier for the operator to swing it where needed.

Alright, here's the clearest look at that #FOXcamera set up I've seen so far. Ronin gimbal, Sony Camera, Sony lens. Camera is controlled by the buttons and joystick on the handle. Photo: (AP Photo/Andrew Harnik) pic.twitter.com/OmDNKxkCRk

Lots of love for the end zone camera angle in DC. And it’s justified. The shots are gorgeous.

According to FOX, it’s actually NOT a traditional “broadcast” camera. Instead, it’s a Sony mirrorless on a handheld gimbal.

You can see the op in this clip. pic.twitter.com/N6twrXjhI5

Between the high quality of the image and the unique camera angles, it’s got a lot of people excited and thinking about its potential usage moving forward, especially in the Super Bowl. And think about how cool some of those shots will look when (eventually) you can have fans cheering behind close-ups of the players celebrating.

This Seahawks game is being shot by Alejandro Iñárritu. pic.twitter.com/DXrGcecCYU

It’s also hard not to see the direct camera access and not think of all the ways the NFL and its broadcast partners have borrowed the best bits of the XFL and taken them to the next level.

While it might be unique to see these kinds of cameras being used in a regular-season NFL game, 8K cameras are not new to pro sports broadcasting. We wrote about 8K Ultra HD being the future of sports broadcasting back in 2015 and that does appear to be coming to pass. CBS incorporated it into their recent Super Bowl broadcast, Fox deployed 8K cameras for the World Series in recent years, and Olympic broadcasters were making a strong push for 8K cameras at the 2020 games in Tokyo and moving forward.

Expect crisp images like these to become more normal in the coming weeks, months, and years, and you can also expect to see broadcasters figure out what else they can do when you combine up-close access with stunning visual clarity.