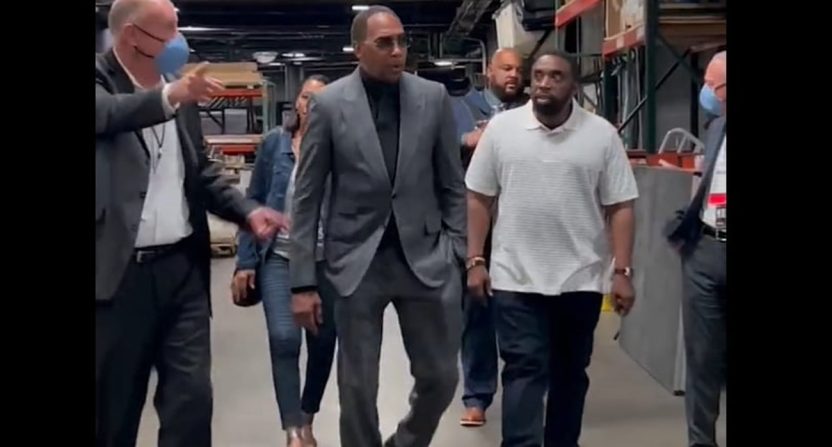 Stephen A. Smith entered Boston’s TD Garden for the Eastern Conference Finals like an absolute superstar, promptly reminding everyone he’s the MVP of ESPN.

NBA players have transformed the arena entrance into somewhat of a fashion show in recent years, garnering attention from camera operators as they embark on the short walk from the parking lot into the tunnel.

Prior to Game 3 of the Eastern Conference Finals between the Boston Celtics and Miami Heat, Smith walked the runway with a strut. Fitted suit, black shirt and tie, keeping his sunglasses on inside the dark corridor of the TD Garden before giving Michael Wilbon a finger point, Smith offered more swagger than any other sports media member.

.@stephenasmith's entrance for Game 3 in Boston is too cold ?? pic.twitter.com/A1K4e9fCSU

The clip went viral, generating more than three million views and thousands of comments, including from one fan who joked, “He walkin around like he been averagin 32 9 and 6 this series.” Smith didn’t argue the point and quote tweeted the fan to defend his strut.

I’m averaging much more than that……..for ESPN and Walt Disney, my brother! Remember that!!!! https://t.co/67Ou1sjIMq

“I’m averaging much more than that……..for ESPN and Walt Disney, my brother! Remember that!!!!” Smith answered.

Smith may not be the highest paid employee at ESPN, now that the network has added Joe Buck and Troy Aikman to bolster their Monday Night Football booth. And he can’t be thrilled to see the tens of millions of dollars being thrown at NFL analysts who work once a week while he exudes a dogmatic work ethic. But Smith remains ESPN’s MVP.

You may not love every one of his opinions, but you have to respect the work ethic that built Smith into one of the most recognizable and important personalities at ESPN during his second tenure with the network.  First Take, NBA Countdown (where he’s been specifically cited by execs, along with Wilbon, as “marquee, brand-name talent“) and Stephen A.’s World, mixed with guest appearances on Get Up and regular cameos on General Hospital, Smith isn’t just a sports talker on ESPN, he’s a multi-platform star for the entire company, whose production is worth more than 32 and 9.