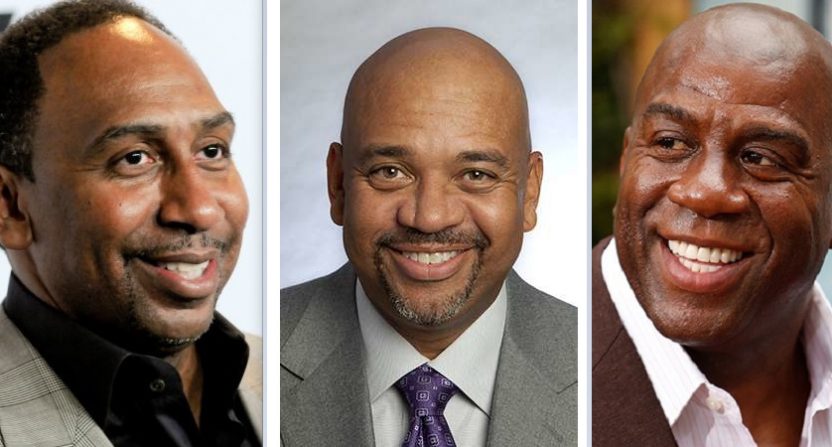 After spending years criticizing the formation of NBA “superteams,” Stephen A. Smith is apparently trying to put together his own version for ESPN NBA studio coverage. How “super” this lineup might be is in the eyes (and ears) of the beholders, but Smith is certainly trying to draw some big names, with a report from Andrew Marchand of The New York Post Thursday indicating Smith (seen at left above) is looking to bring Magic Johnson (seen at right above) back to ESPN and partner with him and Michael Wilbon (seen at middle above) for some as-yet-unspecified NBA coverage. Here’s more from Marchand’s piece:

Smith wants to team up with Johnson, possibly on “NBA Countdown,” the pregame show that leads into the NBA Finals and other marquee games, according to sources.

Smith’s ideal setup would be to have a Big 3 that also includes “Pardon the Interruption” co-host Michael Wilbon, who often works alongside Smith on “SportsCenter.”

Nothing is finalized, so it hasn’t been determined whether the potential show would have a traditional host.

…Smith already does a regular-season pregame show on Wednesdays, which is not part of “Countdown,” but rather his own mini “SportsCenter.” This show also could be a landing spot to team Smith with Johnson and Wilbon.

This would be just the latest ESPN project for the very-well-compensated (current estimates are around $12 million a year) Smith. In addition to Smith’s role on First Take (where he’s now the unquestioned debater-in-chief after seeing off Max Kellerman and replacing him with presumed rotating guests), he also has the Stephen A.’s World ESPN+ show. And, as Marchand notes, Smith has been doing pre-game work on regular-season Wednesdays since 2019 in something titled SportsCenter with Stephen A. Smith (which evolved from him doing that for the NBA Finals in 2018), but one that bears little resemblance to any other edition of SportsCenter.

Wilbon has sometimes been on that pre-game show, and he’s regularly worked with Smith on many projects, so that part of this wouldn’t be new. And if ESPN is able to bring back Johnson (who appeared on-air regularly at the network from 2008–2013 and from December 2016 to February 2017, and has appeared for some specials since then, often with Smith), certainly the easiest path to doing that would be to add him to the existing Wednesday night show. (Also, it’s worth noting that Johnson already has a ton of money, and that if he wants to return to TV, it seems likely that will be in a limited role; a Wednesday night pre-game show with Smith and Wilbon might fit that.)

Putting Smith (and/or Wilbon and/or Johnson) on Countdown would be a much bigger step. Yes, Countdown has a hosting vacancy following Maria Taylor’s exit, and yes, the removal of Rachel Nichols from ESPN (NBA coverage and more broadly) means there’s one less prominent candidate to step in there (although it never seemed likely that ESPN would have replaced Taylor with Nichols, given how Taylor’s exit started). And yes, both Wilbon and Johnson have been on previous incarnations of Countdown. (There have been many, many incarnations of Countdown.)

But Countdown  currently has three returning personalities (Jalen Rose, Jay Williams and Adrian Wojnarowski), plus many other candidates to join (as hosts and/or analysts). Swapping all that out for Smith/Wilbon/Johnson might create more issues than it would solve. Plus, it would be unusual for Countdown to go from a relatively serious pre-game show into Smith’s brand of yelling and drama; it’s notable that Marchand’s piece includes “In the past, the NBA has been hesitant about having Smith on the main pregame show for the NBA Finals, as the league feels his style is too opinionated and not the right tone to lead into its main event, according to sources.”

At any rate, there’s a lot that could happen here. ESPN reportedly has some sort of daytime NBA show coming to replace The Jump, so if they are determined to put Smith/Wilbon/Johnson on Countdown, it’s possible they reroute the current Countdown cast to that. It’s also possible that Johnson doesn’t come back to TV, and that Smith either carries on with his Wednesday night “SportsCenter” lead-ins or takes up a Countdown role (possibly with Wilbon). We’ll see what it winds up as. But it’s certainly notable that Smith is reportedly pushing for something that lets him team with Wilbon and Johnson. He’s gotten a whole lot of what he wants lately, and we’ll see if he gets that.

[Image is from the Smith/Johnson The Last Dance special announcement, with Wilbon’s Northwestern faculty photo subbed in over Michael Jordan]