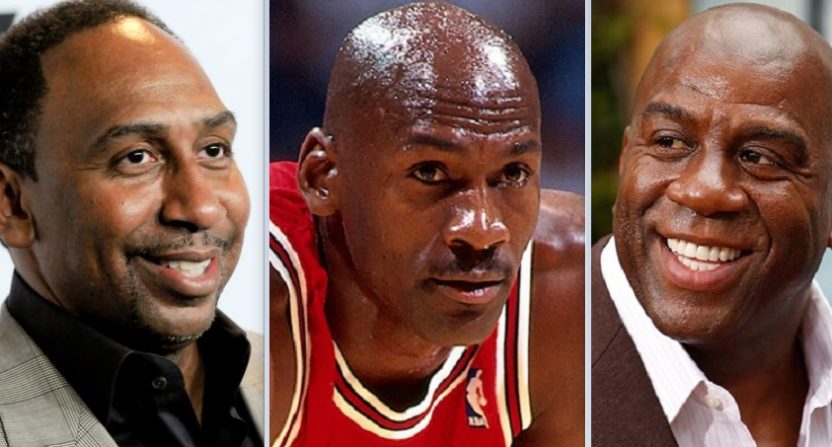 The final two episodes of The Last Dance will air this coming Sunday (May 17) on ESPN, but there will be just a bit more dancing for the 10-part Michael Jordan documentary.

As reported by TheWrap’s Tim Baysinger, ESPN is producing an after-show for the documentary titled “After the Dance” that will air on ABC Tuesday at 8 p.m. ET. Billed as a “SportsCenter Special,” the one-hour program will be hosted by Stephen A. Smith with Magic Johnson and several other surprise guests joining the program. Smith is also an executive producer for the show.

The special airing on ABC seems curious since all 10 episodes of The Last Dance will have aired on ESPN. However, both networks are under the Disney corporate umbrella and the documentary has been promoted and recapped plenty on ABC’s Good Morning America. “After the Dance” will also presumably be promoted on ESPN leading up to Sunday’s final two episodes of the docuseries and in the days leading up to the after-show.

ESPN has already offered two different after-shows for viewers following each Sunday night airing of The Last Dance. Scott Van Pelt’s 11 p.m. SportsCenter has served as a postgame show with Jackie MacMullan and Michael Wilbon sharing their insights and memories from covering the NBA and those 1990s Chicago Bulls championship runs. Van Pelt also interviews a key figure from the episodes that aired, such as former teammate B.J. Armstrong, John Salley from the rival Detroit Pistons, and Jordan’s 1993 NBA Finals adversary Charles Barkley.

Online, Jalen Rose and David Jacoby host a Twitter Live after-show with Last Dance director Jason Hehir, who essentially provides a Blu-ray commentary on what viewers just watched with behind-the-scenes perspective explaining the process of making a particular episode or an intriguing story from one of the interviews seen.

Dennis Rodman = feral cat?#TheLastDance director @jasonmhehir describes what it is like to interview Dennis Rodman ???? pic.twitter.com/UKhuRctgks

UPDATE: ESPN also produces a pre- and after-show on the network’s Facebook page, hosted by Cassidy Hubbarth and Sarah Spain.

????One of the best pieces of content surrounding #TheLastDance has been the Pre-Dance & Post-Dance on ESPN's Facebook w/@CassidyHubbarth & @SarahSpain.

Putting the “After the Dance” special on ABC seems to indicate the network is looking for a different, wider audience. Although if that’s the objective, Stephen A. is a curious choice to host the show, instead of someone, for instance, like GMA‘s Michael Strahan or T.J. Holmes. As an executive producer, maybe Smith sees an opportunity to reach a new audience as well.

Will most viewers tuning in to ABC have watched all 10 episodes of The Last Dance? (As mentioned, Good Morning America has worked to nudge its audience in that direction.) And how many who watched the docuseries on ESPN will go to ABC for this wrap-up two days later? Will this after-show largely be a recap of the entire project packaged for a more mainstream viewership?

ESPN and ABC almost certainly want to extend the afterglow for The Last Dance. Moved up from its original June airdate because of the COVID-19 sports shutdown, the 10-part docuseries has been a hit for ESPN. The April 19 premiere gave the network its highest-rated documentary ever, averaging 6.1 million viewers. Through its first eight episodes (airing the past four Sunday nights from 9 to 11 p.m. ET), The Last Dance has averaged an audience of 5.6 million.