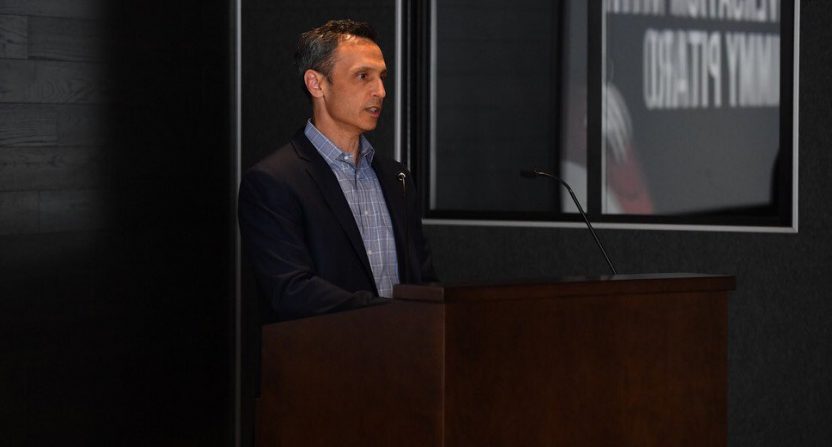 There’s now an interesting follow-up from last week’s coverage of the New York Times releasing audio of Rachel Nichols’ 2020 comments on Maria Taylor, and from all the subsequent discussion that drew about Nichols’ response, ESPN’s response, ESPN’s past history with Black employees, and the larger cultural context of these events. The latest news on this front comes from an internal memo in response to the Times piece that ESPN president Jimmy Pitaro (seen above speaking at an ESPN football media day in 2018) sent to ESPN staff Friday. Ben Strauss of The Washington Post mentioned this memo near the end of a piece published Tuesday morning (which was largely about Stephen A. Smith’s Shohei Ohtani comments), and Alex Weprin of The Hollywood Reporter published the entire memo Tuesday evening.

Most of that memo isn’t that notable. It’s Pitaro saying “we have a much better story than what you’ve seen this week,” which is to be expected, and it’s him outlining various ESPN diversity initiatives. If you’re interested in the full thing, read Weprin’s piece. But there are a couple of parts of this that suggest that there are areas of the Nichols-Taylor saga worth a further look, specifically whatever happened between October 2019 (when they announced that Nichols’ portion of NBA Countdown hosting would include the NBA Finals) and the NBA’s July 2020 restart (which had Taylor hosting Countdown for the Finals, and which led to Nichols’ call that led to all of this). First, from the memo:

We respect and acknowledge there are a variety of feelings about what happened and the actions we took. The details of what took place last year are confidential, nuanced and complicated personnel matters.

…Before I get into the details, I do want to be clear on one thing: Maria Taylor was selected as NBA Countdown host last year because she earned it. Please know our commitment is that assignments and opportunities at ESPN are based on merit and any concerns, remarks, or inferences that suggest otherwise have been and will continue to be addressed.

This is notable because the second paragraph is indirectly addressing Nichols’ comments that started all this, which were as follows (as per the NYT):

It’s worth keeping the context of those comments in mind. They were on a phone call that Nichols believed was private, a call that was to long-time LeBron James advisor Adam Mendelsohn. They became public because that call was recorded on a server back at ESPN headquarters via a webcam connection to Nichols’ computer (exactly how that happened is unclear; the simplest explanation is that Nichols left that camera running, but others have suggested more nefarious explanations), then were videoed by people who saw that and passed around inside and outside ESPN, leading to this eventual Times report a year later. And, notably, those comments came after ESPN had actually taken Nichols’ “thing” away. That “thing” was hosting the ABC coverage of the NBA Finals, which they specifically said she would be doing in an October 2019 release about their plans for splitting Countdown hosting amongst Nichols and Taylor following Michelle Beadle’s exit:

Rachel Nichols will expand her role as host of The Jump, ESPN’s breakout daily NBA studio show. The Jump will now serve as the on-site pregame show on ABC for the marquee NBA Saturday Primetime on ABC series, which airs January-April, as well as the pregame show on Christmas Day prior to the Los Angeles Lakers vs. LA Clippers primetime game on ABC. As part of her expanded role, Nichols will host the NBA Finals on ABC next June, as well as marquee games throughout the NBA Playoffs. As one of the NBA’s longtime preeminent voices, Nichols helped launch The Jump in 2015 and will continue to host the Monday-Friday editions of the show from ESPN’s Los Angeles Production Center at 3 p.m. ET on ESPN.

Of course, broadcasts sometimes see personnel changes in the time between a release and the event itself. There are plenty of people who have been announced as doing one thing for a time period only to have that thing later change before that time period’s up. And ESPN in particular has done this a lot; our “Art of the Demotion” feature from last February covers many of the more prominent examples.

In particular, this happened with previous NBA Countdown host Beadle. Beadle returned to ESPN in 2014 , began hosting Countdown in April 2017 (replacing Sage Steele in a rare mid-year move), and then was part of new morning show Get Up in 2018, with ESPN even relocating Countdown to Bristol and then New York City so she could continue there as well. In August 2018, she left Get Up and signed an extension with ESPN to “return to Los Angeles to focus on the NBA,” including hosting Countdown (sent back to L.A. at this point). She was then replaced by Nichols and Taylor ahead of the 2019-20 season, and negotiated a buyout with ESPN in the fall of 2019. So Nichols isn’t even the first NBA Countdown host to suddenly lose that role.

At any rate, Pitaro’s “assignments and opportunities at ESPN are based on merit” comments can be defended, but it’s worth noting that “merit” in this context is subjective. Television hosting isn’t math or hard science where there’s a “correct” outcome to an equation. The job someone does is evaluated independently by viewers and executives, and those evaluations differ, and they depend on the viewers’ preferences (real and/or perceived). Yes, there are obvious “wrong” things (dead air, repeated factual missteps, repeated mispronunciations) that can happen, but when you have people who aren’t making those obvious mistakes, an evaluation of who’s better is going to be largely subjective.

Sometimes, enough viewers align in an opinion, and that leads to a network making a change (some of the recent history of Monday Night Football comes to mind here). But sometimes, “merit” is just “Who does Jimmy Pitaro (and/or whoever he’s delegated a particular staffing decision to) want in this job?” And that would seem to be what came up in this particular case. There didn’t appear to be a number of obvious on-air missteps from Nichols ahead of the move, or a lot of public criticism of her work hosting, or even much external speculation that a move was about to be made. So key remaining questions are when that decision was made, who made it (Pitaro himself, or someone under him?), and why it was made.

Can ESPN choose to change NBA Countdown hosts at any point, regardless of what they’ve previously stated in press releases? Absolutely. (Barring contractual issues; part of Nichols’ call had her saying Finals hosting was in her contract. But even then, they could presumably make an on-air change with at worst an offsetting payment or other action to remedy the breach; they’ve definitely bought out or reassigned under-contract people before.) And it’s also quite possible that this change wound up working out for them; Taylor’s certainly received a fair bit of praise for her hosting of Countdown.

But the backstory on when and why that decision was made is notable, especially with Pitaro now putting forth such a public defense of that decision without any specifics. It’s worth mentioning that some of this might be linked into details of production around last year’s bubble; Countdown at the Finals originated from ESPN’s studios in New York, while Nichols was on scene in the Orlando bubble. But that doesn’t seem to entirely explain it; the phone call suggests that Nichols really cared about the Finals’ hosting job, so she presumably would have left the bubble in time to host for the Finals if that had been an option for her.

And that leads us back to the first part of Pitaro’s statement, which includes that “The details of what took place last year are confidential, nuanced and complicated personnel matters.” Those details may well be all three of these things. But those details (or at least the broad outlines of them) definitely have some relevance to the public, especially as context for the parts of the Nichols-Taylor saga that have already been reported, and especially with Pitaro’s larger memo saying “we have a much better story than what you’ve seen this week.” The details of this decision have a lot of relevance to that overall ESPN story, and specifically to the Nichols-Taylor story. And it will be interesting to see if they ever do get reported, and if we ever do learn about why and when ESPN took away Nichols’ Finals hosting job.