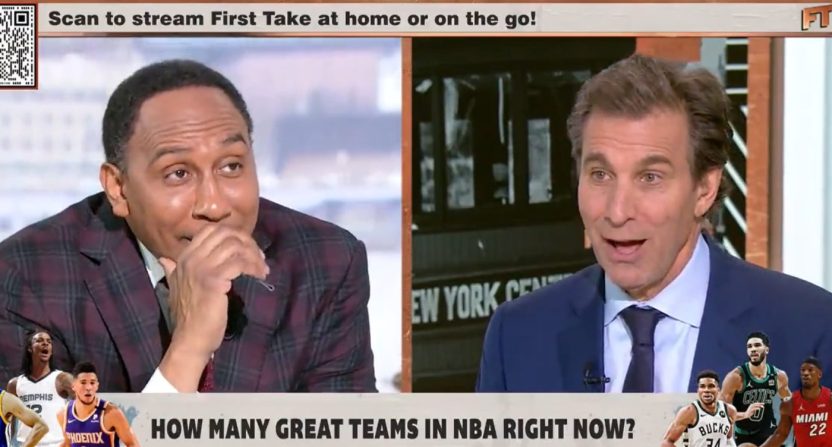 Earlier this week, Joel Embiid made his case for why he should be the NBA MVP, claiming if he doesn’t win the award, it can only mean the Philadelphia 76ers superstar is hated by the media.

Wednesday morning on First Take, Stephen A. Smith and Chris “Mad Dog” Russo debated Embiid’s tactic of shaming the media into voting for him. Smith said Embiid is right to push the media for their MVP votes, whereas Russo argued it was “beneath” the 76ers star.

Embiid was left to sing his own praises, but the debate between Russo and Smith quickly turned into an argument about themselves and who is more famous. But instead of doing their own campaigning, the boisterous sports talkers were surprisingly, or dare I say humbly, campaigning for their opposing debate partner.

Come for the debate about Joel Embiid, stay for Dog and Stephen A arguing over which one of them is more famous pic.twitter.com/sGbyafpshn

“The man’s got his own channel,” Smith said emphatically, attempting to prove the 62-year-old Russo has more sports media fame. “OK? Everybody’s not Mad Dog!”

“You own this show,” Russo barked back. “How do you think I’m on? I’m not on because they like me. It’s because you have me on to talk sports!”

“It says First Take, it doesn’t say Stephen A.” Smith argued. “Your channel says Mad Dog! It could be Adam Schein, it could be anybody, it could be J.T. The Brick!”

Smith’s rare moment of humility and implication that First Take isn’t his show is an about-face from past claims that he gave Max Kellerman the boot to give the show a fresh format. First Take might not bear Smith’s name, but it’s definitely his show.

Russo might have his name on a SiriusXM channel, but he reached for one area where he knows Smith can’t lose to him. “You wanna compare salaries to see who’s making more money – you or me?” Russo asked. “YOU’RE GONNA KILL ME IN THAT DEPARTMENT!”

Smith humbly said, “I disagree,” but Russo’s correct. Smith’s contract with ESPN is reported to be as high as $12 million per year, or four times the $3 million annual salary that lured Russo to SiriusXM from WFAN back in 2008.

And then Russo hit Smith with one final blow. “I am not on General Hospital either!” For those who aren’t locked into the soap opera scene, Smith has a recurring role on General Hospital as Brick, a career achievement that the First Take host often speaks very highly of. Once the soaps entered the conversation, even Smith knew this was one debate he couldn’t win.