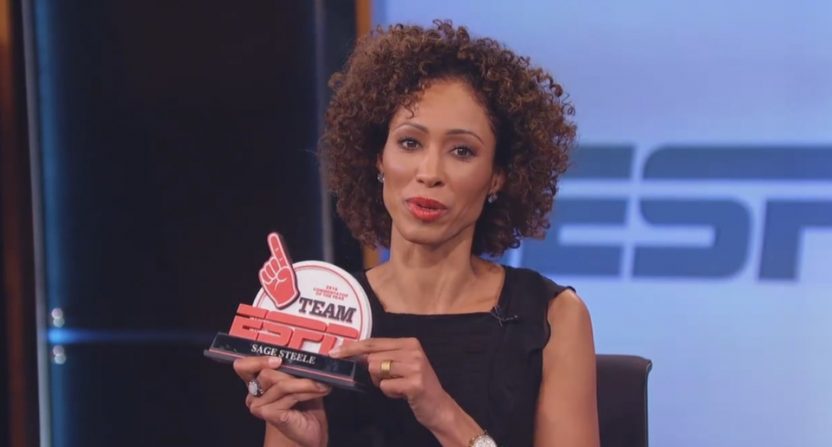 It’s not surprising that ESPN is defending itself against anchor Sage Steele’s “very unusual” lawsuit and filing to dismiss that suit, but one of the tactics they’re taking is interesting. As per Ben Strauss of The Washington Post, ESPN’s filing to dismiss the lawsuit claims they didn’t actually punish Steele after her controversial comments last fall on ESPN parent company Disney’s vaccine mandate (which she called “sick” and “scary”), former U.S. president Barack Obama identifying as Black (“I think that’s fascinating considering his Black dad was nowhere to be found but his White mom and grandma raised him”), and female on-air talent’s wardrobes (“When you dress like that, I’m not saying you deserve the gross comments, but you know what you’re doing when you’re putting that outfit on, too”) on Jay Cutler’s podcast.

The ESPN stance is that Steele (who continues to appear on air for the network) cannot prove she was punished, even under the Connecticut law that extends First Amendment protections (usually just about governmental interference in speech) to the private sector. The company says that’s because they never docked Steele’s pay. They also say the criticism she received from coworkers (which she cited as harassment, and blamed the company for not defending her from) is protected expression from those coworkers. They also say some of her “lost” assignments were at the request of people representing the people and events she was supposed to interview or host, and they say that decisions on who appears on what show are “casting decisions” that fall under their own protected expression. Here’s more on that from Strauss:

ESPN’s filing asked the Connecticut Superior Court to dismiss the lawsuit, arguing that Steele cannot demonstrate she was punished since her pay was never docked. ESPN also argued that is not legally responsible for how co-workers and others responded to Steele’s comments and that the company has its own right to expression that includes who it puts on the air.

“Removing Steele from broadcasts, allowing her co-workers to forgo appearing with her, and allegedly conditioning her return to those broadcasts on her issuing an apology are casting decisions that are considered conduct furthering ESPN’s protected expression,” the filing read.

…ESPN argued that not intervening in personality conflicts did not amount to the company disciplining Steele.

“Steele’s comments upset several of her colleagues,” the company’s motion said. “She may be unhappy that her co-workers disliked what she said, but ‘personality conflicts at work that generate antipathy and snubbing by . . . co-workers will not meet th[e] standard’ for discipline.”

On the lost assignment front, Strauss writes that ESPN’s filing also includes that Steele losing a previously-announced assignment to interview Halle Berry at an ESPNw summit was at the request of Berry’s PR team, and her lost role hosting a V Foundation gala was after the organizers “perceived her comments about the coronavirus vaccine to be ‘anti-science.'” Those are interesting notes. They suggest that some of the opposition to Steele in prominent roles after these comments wasn’t from ESPN, but from event organizers and interviewees. Whether that’s a successful defense or not remains to be seen; Steele’s representation could undoubtedly argue that ESPN has stood up for particular talent in the past even after organizers or interviewees have raised concerns, but there’s history of both them doing so and not doing so depending on the situation.

The more fundamental, and maybe more interesting still, discussion here is about ESPN’s claim that “casting decisions” are “conduct furthering ESPN’s protected expression,” and that their employees cannot prove they were punished if their pay was never docked. There’s a long history of high–profile ESPN suspensions, which have admittedly been inconsistent. But it’s unclear just how many of those suspensions have been without pay. (And this suggests that, at least from a legal perspective, they don’t view a suspension with pay as punishment.)

It’s also notable that ESPN has been a particularly heavy user of the art of the demotion. They’ve often shifted people to less prominent roles after backlash or criticism, but have frequently done so in a way that minimizes negative coverage. And they’ve also paid a lot of people not to work, either letting their contracts (and their non-compete clauses) run out in full or sometimes striking early-exit agreements. So under this specific legal argument, it appears that ESPN has issued very few actual “punishments.” Of course, that’s largely not an important distinction, as they haven’t usually been sued by people still there (the lawsuits they have seen are more typically after someone’s exit), but it’s interesting to see them spell out their thinking that they’re making “casting decisions” about who appears on air rather than punishing particular employees.

There’s one other thing worth mentioning in that Strauss piece, which is particularly significant for how it became the focus of pushback from Steele’s legal team. In his final paragraph, Strauss wrote “The lawsuit has been viewed internally at ESPN with some confusion. Steele signed a lengthy contract extension several years ago that expires in 2024. She makes around $3 million a year, according to two people with knowledge of her salary, and is the highest-paid female talent at the network.” Steele’s lawyer Bryan Freedman centered on that salary discussion in a statement to Ryan Glasspiegel of The New York Post, blaming Disney (rather than ESPN) and bringing up Scarlet Johansson, of all people:

Here is a statement to @nypostsports from Sage Steele's attorney, Bryan Freedman, in response to ESPN's motion and the story about it broken by Ben in the Washington Post: https://t.co/KO1XUtXjev pic.twitter.com/jycwAbhWg5

It’s notable that that’s the detail Freedman decided to key on here, and that he portrayed it as a “Disney responds.” Steele’s salary (absolute and relative) is interesting information, and there’s a news value argument for Strauss reporting it, especially with the ESPN defense here keying on them never reducing Steele’s compensation even after she lost some prominent assignments and appeared on air less often. But tying this to Disney and Johannson is a quite a leap, especially as that particular lawsuit, eventually settled, was all about financial compensation and the divide in how that worked with ticket receipts versus streaming).

The only mention of Disney in Strauss’ story is about Steele’s comments on Disney’s vaccine mandate, with the legal response being solely attributed to ESPN. And there doesn’t seem like a particular need for Disney to get especially involved with this ESPN matter (yes, ESPN’s ultimately a Disney division, but they’re one with their own extensive legal team). Referencing “Disney” here rather that ESPN feels like an attempt to rile up people mad at Disney on other fronts.

Beyond that, Freedman’s pushback at Disney for “disclosing facts about Sage’s salary” comes with an interesting choice of words. The information about her salary doesn’t seem to be in the legal filing; at the least, that’s not how Strauss references it. He references it as “She makes around $3 million a year, according to two people with knowledge of her salary, and is the highest-paid female talent at the network.”

Yes, the probability is that “two people with knowledge of her salary” are ESPN (or possibly Disney) executives. The other obvious people who would know that are Steele and her representatives, and they’re not likely to be the source here considering that her lawyer’s upset about that being revealed. But it’s not 100 percent provable that only ESPN/Disney execs could be the source here; salary information often makes its way to a wide list of people, sometimes even including other talent’s agents or other reporters. And Strauss’ inclusion of that information looks like reporting of information relevant to the story, not merely passing on something Disney “disclosed.”

But while Steele’s salary and her relative salary position at ESPN is notable context  for members of the public looking to form their own opinions on this situation, the argument about Steele’s salary going public doesn’t seem extremely relevant to the legal proceedings. And that’s especially true after ESPN filing that they never docked her salary. The key element there appears to be if allowing other talent to opt out of working with Steele and removing Steele from events that interviewees and organizers had problems with her working in the wake of her comments is legally-defensible conduct from ESPN. And it’s interesting that Steele’s lawyer didn’t engage with that line of argument, at least not in this statement (perhaps he will in a future filing). It would be interesting to read a legal counterargument against that ESPN claim; does Steele’s camp think that ESPN on-air talent can never be reassigned or removed from events for any reason, or just that these particular comments weren’t sufficient reason for that reassignment/removal?

At any rate, the ESPN filing here and Freedman’s response to it are both notable developments in this case. And they make it seem like Steele’s case against ESPN may not be resolved any time soon. We’ll see where this goes next.