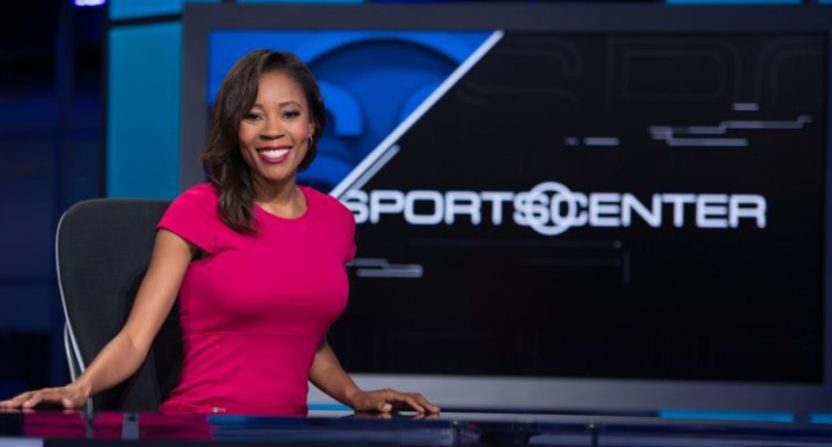 The latest development in Adrienne Lawrence’s lawsuit against former employer ESPN is her argument that the network wasn’t acting in their role as a media company (and thus, shouldn’t receive protections intended for media) when they published portions of her text exchanges with SportsCenter anchor John Buccigross. It’s an interesting argument, and one worthy of further examination.

There’s a lot of history here, with Lawrence (who joined ESPN in 2015 on a fellowship, appearing as both an anchor and a legal analyst, but didn’t receive a permanent job offer when that fellowship expired) first filing a complaint against the network with the Connecticut Commission on Human Rights and Opportunities last summer, airing her claims of sexual harassment and retaliation publicly in December as part of a wider Boston Globe article on sexual harassment at ESPN, and getting in a back-and-forth with ESPN when they published part (but not all) of her texts with Buccigross. (The Globe later published the full exchanges.)

That all led to Lawrence eventually filing a lawsuit against the network in federal court in March. ESPN fired back in April with a court filing that attempted to strike parts of the complaint and narrow Lawrence’s claims, calling much of what she presented about the network’s culture “stale gossip” and saying “she should not be permitted to hijack the judicial system to wage a public relations war…by asserting claims dating back to before she was born.” It also included a bid to strike Lawrence’s “false light” claim about how ESPN responded to her accusations, specifically with their press release and their publication of part of the text exchanges between Lawrence and Buccigross.

Lawrence and her attorneys have now responded to ESPN’s motion to strike with another court brief (available in full here) saying that the past allegations are relevant to the existence of a hostile workplace, but their even more notable argument comes around the “false light” claim, where they’re arguing that ESPN wasn’t acting as media in their release:

Lawrence argues she’s not a public figure despite once being an on-air commentator and giving a quote to the Boston Globe and that the “fake texts” are not protected by any right to petition the government. She further contends that the publication of texts disseminated a falsehood to the public in an intentional and highly offensive way.

“Here, by contrast, ESPN was neither acting as a ‘media company’ nor ‘reporting news’ or engaging in journalism,” states the brief. “Indeed, ESPN’s publication of the Fake Texts did not comport with journalistic ethics or standards. See https://www.spj.org/ethicscode.asp. Rather, the statements about Ms. Lawrence and the Fake Texts were statements by a vindictive former employer, published in a press release (with no bylines, sources or objective facts) on ESPN’s press release website, ESPN Media Zone (as opposed to ESPN’s news reporting website: ESPN.com) solely for the purpose of provoking public disdain for Ms. Lawrence and garnering support for Buccigross.”

Lawrence and her attorneys would seem to have a point on at least that front. From the outside, it seems challenging for ESPN to claim that a press release responding to and attempting to refute allegations from a former employee has much to do with their role as a media company. That press release certainly wasn’t reporting news, and their decision to include those texts (and in particular, to only include some of the texts) turned plenty of heads at the time for how unusual it was.

Now, what this may or may not actually mean for the lawsuit isn’t clear. Free speech laws have plenty of complications, and this case is different from many defamation cases, as it’s about workplace behavior, alleged retaliation and the “false light” portrayal in a press release rather than a news organization publishing a story on an external subject. And it’s worth noting that this is one of many arguments on both sides, and that it’s not even the whole extent of the false light argument, which also includes Lawrence arguing that ESPN made social media bots to attack her, ESPN saying that’s implausible and has no factual support, and Lawrence arguing in this most recent brief that even if ESPN didn’t make those bots, they’re evidence of how ESPN influenced reaction against her with their press release:

Lawrence also adds that ESPN created social media bots on the very morning it released the texts to further compound the falsities. And if ESPN didn’t create those bots? She adds, “Thus, the Fake Accounts are a double-edged sword: either they were created by ESPN to harm Ms. Lawrence’s reputation, or, they are strong evidence of the negative reaction to the Fake Texts and the detrimental impact they had on Ms. Lawrence’s reputation.”

It does seem highly improbable that ESPN created social media bots to go after Lawrence (it seems much more likely that she was attacked by outside Twitter users and bots for her role in a high-profile story like this, something regularly seen), but she might have a point that the Twitter abuse she took after ESPN’s release is relevant to what that release meant. And the discussion around the release is maybe the most interesting part of this debate to the wider sports community at the moment; this lawsuit is still in its very early stages, and it may or may not wind up going anywhere, but that release is beginning to look like a bigger and bigger misstep for ESPN.

Publishing those texts was an extremely unusual move by the company, one that didn’t clear them of many of Lawrence’s charges and one that still made Buccigross look bad. And publishing only portions of those texts opened the network up to much more criticism once they were published in full elsewhere. And now, the decision to publish that release and the portions of those texts has become a key topic for this lawsuit. From this corner, ESPN might have been far better off if they’d stuck with just a terse statement that they’d investigated Lawrence’s claims and didn’t find them to have merit. Instead, they went in much harder with the publication of those texts, and that appears to have hurt them in at least the court of public opinion. And now, it might hurt them in an actual court.