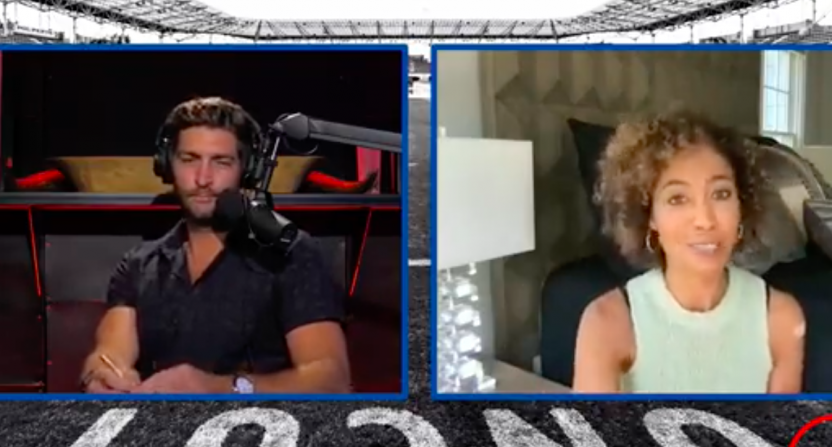 Last week, SportsCenter host Sage Steele’s comments about how Disney and ESPN’s vaccine mandate were “sick” and “scary” made headlines. That clip was one provided to Awful Announcing and other websites in advance of her appearance on an upcoming episode of Uncut with Jay Cutler podcast.

Not included in those clips was one making the rounds on Sunday in which Steele discusses racial identity. In it, Steele, who is of African-American and Irish/Italian descent, is talking about a time she was asked how she would identify her race in the U.S. Census. In her answer, she pivots to President Barack Obama and throws a random dig out that is certainly raising some eyebrows on social media.

ESPN anchor Sage Steele told Jay Cutler it was “fascinating” Obama indicated he was Black on his census form “considering his Black dad was nowhere to be found.” pic.twitter.com/dfrnDydFd8

“If they make you choose a race, what are you gonna put? Well, both,” said Steele. “Barack Obama chose black and he’s biracial…congratulation to the President, that’s his thing, I think that’s fascinating considering his black dad is nowhere to be found but his white mom and grandma raised him, but okay. You do you. I’m gonna do me.”

“Listen, I’m pretty sure my white mom was there when I was born,” she continues. “And my white family loves me as much as my black family.”

The larger point of the conversation was about how Steele identifies and far be it from anyone to tell her how to do so. But it’s the pointed way that Steele posits that a person with parents of different races shouldn’t identify with one of them if that parent acts a certain way that is certainly rubbing people the wrong way. That one’s own identification is owed to one parent over the other based on their actions. Not to mention the comment feeds into a lot of myths and negative connotations about black fathers.

As you might imagine, there were quite a few responses to this line of thinking on Twitter.

Le Sigh. My Dad wasn’t around when I was younger. I’m still Black. ??‍♀️

Along with this and her comments about the vaccine policy and Obama’s father, Steele also discusses her feelings on up-and-coming female journalists having to deal with harassment and worse from male athletes, saying that “when you dress like that, I’m not saying you deserve the gross comments, but you know what you’re doing when you’re putting that outfit on.”

It’s a bit unclear if Steele is trying to lose her job with ESPN, but given their disdain for talent who wade into political and cultural discussions, it’s hard not to imagine they’re noticing at this point.