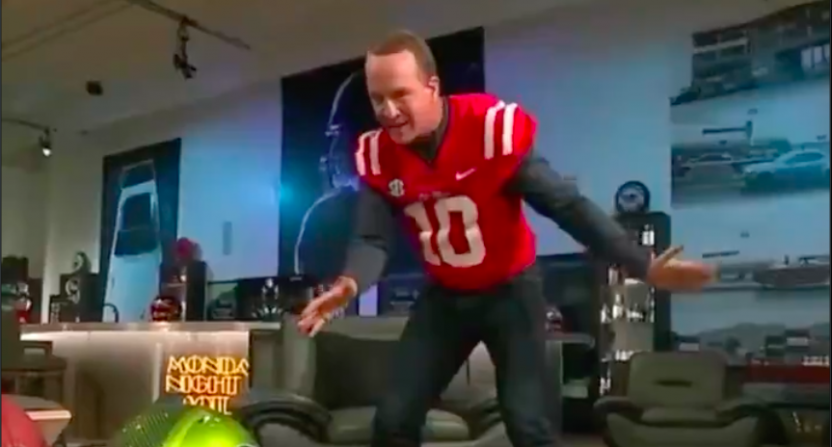 The much-anticipated ManningCast returned for Week 7’s Monday Night Football matchup between the New Orleans Saints and Seattle Seahawks. Along with the return of Peyton, Eli, and the awkwardly electric energy they bring with them, they were joined at different times throughout the game by special guests Marshawn Lynch, Tom Brady, Sue Bird, and Drew Brees.

As we all hoped and/or expected, there was plenty of fun banter, weird moments, and general awkwardness to enjoy. Let’s recap the most memorable moments of the evening.

During his appearance, Brady was discussing an interview he’d done earlier in the day in which he mentioned that while he loved playing against both Manning brothers, he enjoyed the games against Peyton “much more.” Tom is, of course, referring to the two times his New England Patriots played Eli’s New York Giants in the Super Bowl, both of which were won by the Giants.

Eli had the perfect response, saying “I enjoyed all our games, Tom.” Cold, ruthless, and efficient, just like Eli in those Super Bowls.

We wonder who Eli's favorite "External" is. #ManningCast pic.twitter.com/UIu2sshIZw

While Sue Bird was there, Eli turned an easy moment of corporate synergy into a very awkward and hilarious exchange. Bird and Peyton had apparently done a commercial for The Eternals, the latest comic book movie from Marvel, which, like ESPN, is owned by Disney. However, Eli clearly hasn’t been keeping up with the corporate memos because he struggles to figure out what he’s supposed to talk about before stumbling and referring to the film as “Externals.” To be fair, it doesn’t seem like anyone else on the broadcast noticed or cared. Kinda like a lot of people who are tired of seeing commercials for The Eternals.

"Have you ever been in some of the defensive meeting rooms? You wonder why they play defense and, after about two minutes, you go 'yep they could never be an offensive player'" ? ? pic.twitter.com/BeDWPCPNhW

We get that Brady is the ageless wonder and still picking apart NFL defenses like a quarterback half his age, but, geez Tom, you didn’t have to come out and savage them like this. Defensive players watch Monday Night Football too, y’know.

Peyton had to wear an Eli No. 10 Ole Miss jersey because the Rebels beat Tennessee 10 days ago ? #ManningCast pic.twitter.com/myyIzjL5KG

When the ManningCast got going, viewers were treated to a strange sight. Peyton Manning in an Ole Miss jersey. As you probably guessed, it was the payoff for a lost bet from two weeks ago when Eli’s Rebels defeated Peyton’s Vols. We’re guessing these two have made bets with far worse consequences that probably aren’t ready for prime time.

The whole thing also gave us this meme-able moment, of which you can do whatever you want.

"He loved me constantly spanking him" pic.twitter.com/sDKKycVsDb

Just like on the field, you can’t stop Marshawn Lynch, you can only hope to contain him. And when it comes to watching his language while on national television, Marshawn could not be contained.

Later on, Peyton called it back when he saw Saints quarterback Jameis Winston got a bit heated with one of his teammates.

We’ll see the Mannings back here next week for MNF game between the Kansas City Chiefs and New York Giants. We’re guessing there’s going to be plenty of Eli-related hijinks for that one.