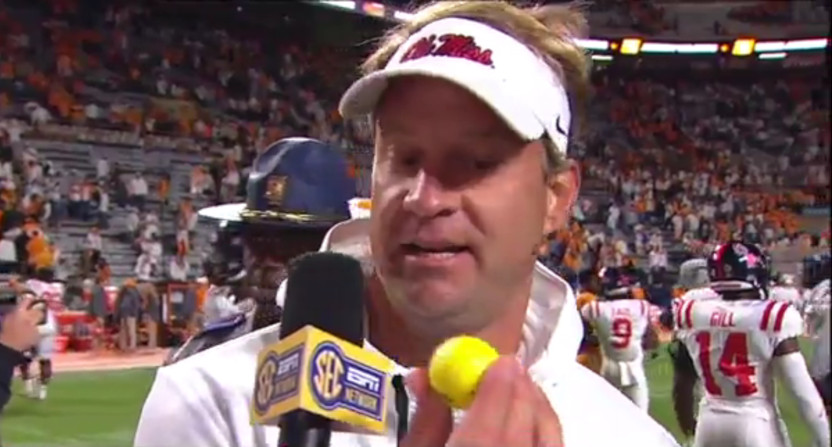 One of the stranger incidences in college football in some time came near the end of the No. 13 Ole Miss Rebels’ road game against the Tennessee Volunteers Saturday. Late in that game, with Ole Miss up 31-26, Tennessee came up just short on a 4th and 24 conversion; they got close on a pass from Hendon Hooker to Jacob Warren, but Warren was ruled down before the first-down marker, and that was upheld on review. That led to Tennessee fans pelting the field with trash, and hitting Ole Miss head coach Lane Kiffin with a golf ball, and to the game being stopped for around 20 minutes while security and police kicked people out of the stadium.

The game eventually resumed after a long delay, and the Vols got the ball back following a defensive stand and the use of their timeouts. But they weren’t able to come up with a touchdown, so the game finished 31-26. The trash-throwing wound up being the most notable part of this, though. Here are some clips of that:

The start, before the broadcast sees the full extent of it. Kiffin walking with golf ball. pic.twitter.com/RKJxW4XHMa

A later look at the bottles and debris, including a bottle of French’s mustard. pic.twitter.com/T2gFDlaram

“Who brings a golf ball to a football game?” pic.twitter.com/k8qml6MELa

And a sideline report on police clearing people out. pic.twitter.com/rehrUkHNUP

The post-game comments of “I don’t know if I’m more excited that we found a way to win or that I didn’t get hit by the golf balls they were throwing at me” from Kiffin are quite something. And Kiffin was particularly in the headlines ahead of this game, as he famously and suddenly left Tennessee for USC in 2010 (a move explored in detail by The Athletic’s Bruce Feldman this week). Emotions have seemingly cooled a little bit since then, with some Tennessee types even talking about trying to entice Kiffin back , but it’s still notable that there’s this history here. And that might have factored into the golf ball thrown at him here.

Overall, this seemed like a pretty good job of handling this from the ESPN/SEC Network broadcast team of Tom Hart, Jordan Rodgers, and Cole Cubelic. Cubelic in particular had a difficult job, being in an area that was getting pelted by debris, but he provided a couple of useful updates here on just what was going on from the police perspective. Hart and Rodgers filled time decently (a very tough thing to do for 20-plus minutes), and Hart set up the replays in question well; they also had some smart discussions of just what the officials’ options were in terms of continuing, rescheduling, or ending the game. And Cubelic handled a very unusual post-game interview with Kiffin well.

The “Who brings a golf ball to a football game? What are you doing with a golf ball in your pocket?” from Hart felt like reasonable exasperation. The subsequent riffing on that from him and Rodgers was a little stranger, but it’s worth keeping that in the context of this whole situation and broadcast, especially as they’ve already said all the important things at that point. But opinions on all of that can vary. The real story here is just how strange this situation was, and the strange broadcast it led to.

Update: Kiffin had a good sense of humor about it on Twitter later, though: