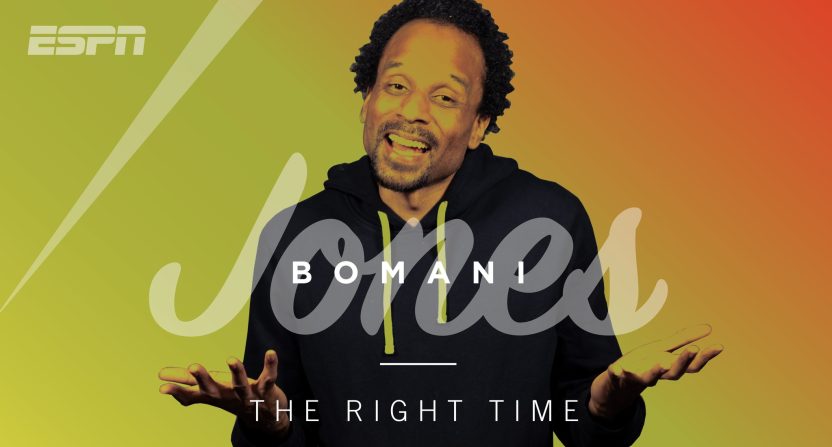 It’s been quite a run for Bomani Jones at ESPN, and it’s going to continue. Jones’ first association with ESPN came with a Page 2 piece for ESPN.com in 2004, his first sports story ever. He worked there on and off as a writer for the next few years, then started making TV and radio appearances with them in 2010 (following radio and TV time elsewhere), then joined ESPN full-time and across all platforms in 2013.

There have been lots of twists since then for Jones and ESPN. Those include the 2018–20 run of Jones’ High Noon TV show with Pablo Torre, his new deal with ESPN after that show ended, his 2020 launch of the The Right Time podcast, reports he was set to leave ESPN this year, his regular role on HBO’s Back on the Record with Bob Costas, the launch of his own HBO show Game Theory (which is coming back for another season, likely in 2023), and discussion in July that his contract was up and his podcast might be ending.

But Jones’ podcast came back September 1, with six further episodes dropping since then. And ESPN announced Wednesday that they’ve signed Jones to a contract extension. That will not only see his podcast continue on a three-times-a-week basis, but will also see him continue to contribute across ESPN’s radio and TV platforms. Here’s more from their release:

Jones will continue to make regular guest appearances across ESPN Radio’s sports talk programming. He will also continue to be a key contributor across ESPN’s television studio lineup, including SportsCenter, First Take, Pardon the Interruption and more.

“I’m very happy to continue The Right Time with ESPN,” said Jones. “I remain indebted to everyone who has worked to build the podcast, particularly my producer Gabe Basayne.”

Mike Foss, ESPN vice president, digital production added, “Bomani is a leading voice in the audio space and has created a signature podcast with The Right Time that strongly resonates with fans and has only continued to grow. He is an impactful contributor across our lineup and we are excited to have him continue with ESPN.”

The Right Time with Bomani Jones has also returned to its regular schedule of three shows each week. Jones weighs in on sports, pop culture, social topics and more, with fan comments on Mondays, friends of the show on Wednesdays and Domonique Foxworth on Fridays.

Jones certainly doesn’t have all his eggs in the ESPN basket these days, especially given wheat he’s doing with HBO. But it is notable to see him come to an agreement to continue with the work he is doing with ESPN, and perhaps especially with The Right Time. Jones’ time with ESPN has included a lot of change, and it looked for a while this summer like his time there might be coming to an end. But this new extension will see him there for at least the next while.