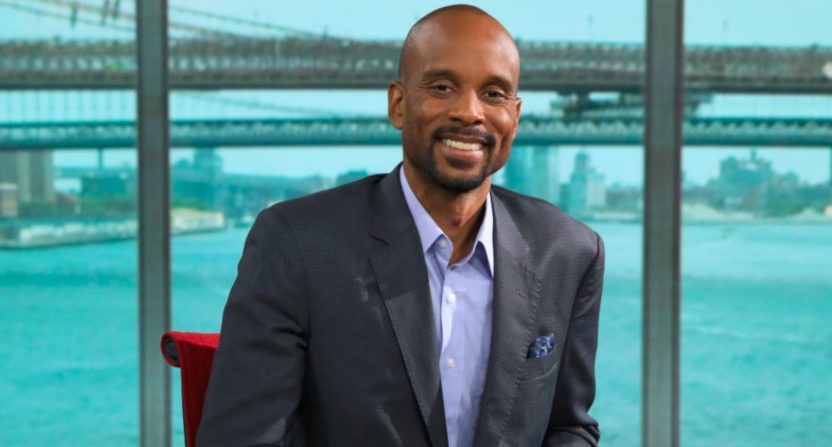 Bomani Jones’s time at ESPN is reportedly moving toward its end.

Andrew Marchand of the New York Post reports in his weekly SportsClicker newsletter that Jones is not expected to renew his contract with the network when it expires in March. Though an official decision has not been made, ESPN whittling down the properties on which Jones appears makes that conclusion likely.

As Marchand points out, if ESPN wanted to stay in the Bomani Jones business, Highly Questionable would probably have remained on the air with him hosting the show. Instead, the show was canceled and revamped into a new program titled Debatable which premieres today (Oct. 4) at noon ET on the network’s digital channels (Facebook, Twitter, YouTube, and the ESPN app).

Jones being part of the Debatable crew seemed like a natural move. Yet in ESPN’s promotional video for the new show, he’s notably absent among “your favorite talking heads” — including Mina Kimes, Elle Duncan, Mike Golic Jr., and Pablo Torre — that will participate.

Set your reminders for the premier of Debatable! Starting Monday, October 4th, watch us every weekday at 12:00 PM ET live on @espn pic.twitter.com/2iozJFZfPi

According to Marchand, Jones will still appear as a panelist on Around the Horn and distribute his podcast, The Right Time with Bomani Jones, through ESPN. Unless he agrees to a new contract, however, those roles may only apply until his contract expires in March.

Jones once looked like a rising star at ESPN, especially after he and Torre got their own show, High Noon, in 2018. What the network’s long-term ambitions for the show and its hosts were aren’t known, but Tony Kornheiser once publicly said that he believed Jones and Torre would be the natural successors to him and Michael Wilbon for Pardon the Interruption.

Obviously, Kornheiser is not in charge of programming nor did his prediction boost ratings. Whether it was the air time — debuting at noon ET before being moved to 4 p.m. — the glut of debate-focused daytime programming, or an attempt to be more nuanced and insightful with their discussions rather than shouting hot takes at each other, High Noon didn’t engage viewers and was canceled less than two years later. Both Jones and Torre later agreed to new contracts with ESPN.

If Jones leaves ESPN, the question is where he might land next. He has a role as commentator and roundtable contributor with HBO’s Back on the Record with Bob Costas. But that’s a monthly program, airing three episodes since its debut in late July.

Marchand mentions Showtime as a possibility, which appears to be a good place to build a show around him. The Right Time could join All the Smoke and Morning Kombat in the premium cable channel’s podcast lineup, providing a wider-ranging show to go with the sports-specific programs on the roster. And on the regular network, Jones could possibly develop a show around commentary and documentary, as seen with weekly programs Desus & Mero and The Circus, and the many documentaries (sports and otherwise) Showtime currently produces.

Considering his past relationships with Dan Le Batard and John Skipper, Meadowlark Media could be a logical choice. And Jones was mentioned as someone the new media company would pursue when it launched. He could move The Right Time over there and appear across the “Le Batard and Friends” network. Spotify (either on his own or with The Ringer) could be a fit too.

Maybe Jones has already been looking ahead to his next stop. Earlier this year, he told the Washington Post‘s Ben Strauss that he wasn’t sure how personalities not named Stephen A. Smith fit at ESPN. So he apparently saw this outcome with the network, especially since ESPN hasn’t developed a showcase for Jones as it has with Torre and the ESPN Daily podcast.