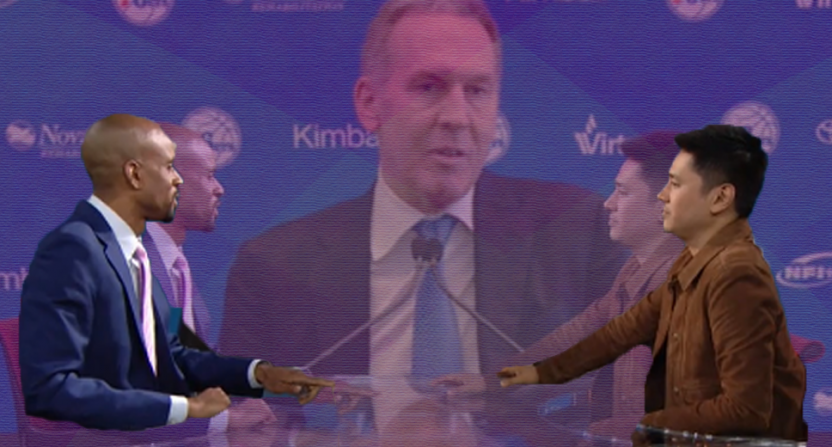 “We’re all here for the jokes,” Bomani Jones said Monday during the opening block of ESPN’s High Noon (9 a.m. Pacific). (Yes, it is officially called that.)

Jones was specifically commenting on the viral video of LeBron James reacting to the Cavs not calling timeout late in Game 1 of the NBA Finals, but he was also making a point that seems essential to the future of his show with Pablo Torre.

“I feel like the beauty of social media in 2018 is that we have taken these things that the sports media would have otherwise gone way so hard and moralistic on and everything else, and we are wallowing in all the jokes,” Jones continued. “We are making the world a better place.”

High Noon, which debuted Monday more than a year after it was first announced, was at its best Monday when Jones and Torre were cracking jokes, giggling and generally having fun. It wasn’t just their uproarious laughter at the LeBron video. It was also Bomani’s quip about what people “around my way” would think about Serena Williams and Maria Sharapova’s relative beauty, Pablo’s light-hearted distress at the poor play of fellow Filipino Jordan Clarkson and the hosts’ joint love of a horse named Bofa Deez Nuts.

That kind of wisecracking was the most refreshing aspect of a show that, content-wise at least, often felt more like the average sports-talk program than we were conditioned to expect. There were two guys at a desk bantering about the NBA Finals. There were quick-hit conversations about the day’s various top sports stories. There were themed notecards (“QUOTE,” “NUMBER”) meant to stimulate discussion. There were even some provocative (dare we say, hot) takes, such as Torre arguing near the top of the show that LeBron James should be Finals MVP even if his team gets swept. If the show aspires to be more than “Pardon The Interruption for a younger crowd,” it’s probably not there yet.

Where High Noon mostly differentiated itself Monday, sometimes for better and sometimes for worse, was through its production. The show employed a variety of camera angles, including a skycam, cutting quickly from close-ups to wide shots to split-screens. In that way and others, High Noon eschewed live-TV convention, cultivating a cinematic veneer. It shot in 24fps. It used a widescreen aspect ratio. It even played dramatic music in the background for most of the show, as if the protagonists were preparing to clash with a castle-dwelling dragon.

That production made the show feel #important, in a way that might have been fitting for a long-awaited premiere, but one that also seemed to betray the hosts’ reputations for not taking sports too seriously.

It’s unclear how much of what we saw Monday is part of the show’s long-term plan and how much was rolled out specifically for the premiere, but some aspects of the debut hour would be difficult to sustain over weeks and months. The production was heavy-handed. The movie motif was intense. The conversation was fast-paced, occasionally to the point of leaving the viewer exhausted. In all senses, the show will probably have to slow down.

But for all of that, there were plenty of moments Monday when it seemed that this fairly ambitious idea — PTI, except live and twice as long — could very much work. Jones and Torre are smart, funny and well-rounded, and it’s clear they genuinely like each other. They have fresh, entertaining takes on everything from the Serena-Maria rivalry to the Jerry Colangelo burner-account scandal to MMA fighters with swastika tattoos. High Noon has a chance to be extremely watchable — especially if the show is truly here for the jokes.