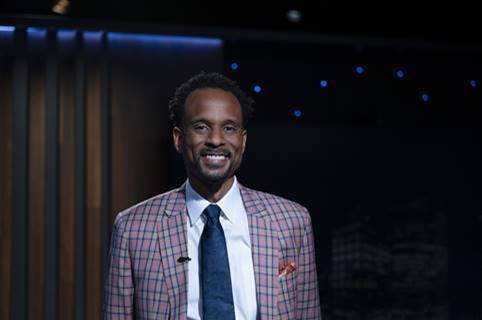 There’s been a lot of recent talk about what’s ahead for Bomani Jones, especially around his own comments last January wondering if he was still a fit at ESPN, the end of Highly Questionable in September, and the report from Andrew Marchand of The New York Post this week that ESPN sources expect Jones to leave next March when his current contract expires. On Thursday morning, though, Jones teased a big announcement in a response to comedian Rod (of the The Black Guy Who Tips podcast) tweeting Marchand’s piece:

there was no real story behind those articles this week. mostly reading tea leaves.

they'll get a story today, tho. pic.twitter.com/yvtPf0ijhj

He then later teased it further with an indication he had something coming with HBO:

i'll give you a totally subtle hint before i tell you the rest. pic.twitter.com/zuS5V9wr3W

And pointed out someone who found the new show’s account:

This is the news I bring to you. I am a journalist. pic.twitter.com/ocQv19nm4L

Yes, that announcement is that Jones is getting a weekly show on HBO. And it’s a show from Hyperobject Industries (a multiplatform company founded by famed writer/director/producer Adam McKay), and one executive produced by McKay himself. Here’s more from a HBO release on the new Game Theory With Bomani Jones:

HBO has ordered GAME THEORY WITH BOMANI JONES, a weekly, late-night series starring Emmy®-winning, sports journalist and commentator Bomani Jones, that will break down timely issues playing out in the world of sports. Production will take place in New York starting in 2022.

…“Bomani is one of the most unique journalists working today,” said Nina Rosenstein, executive vice president of programming, HBO. “He’s someone who gets that sports stories are often about race, politics, economics and gender, and sees a wider view that goes beyond what happens on the field. We are thrilled to be able to work with him and know that ‘Game Theory’ will deliver provocative, insightful and funny stories that you don’t hear too often in popular media.”

“This is, literally, my professional dream, to have a show like this one on HBO,” said Jones. “I’d feel that way with anyone behind it, but working with a top-notch group like Seth, Stu, Todd, Adam and Nina has me more excited than I can express. We have a chance to do something that hasn’t been done before, and I can’t wait to share our work with the world.”

“I have been dying to work with Bomani for years now,” said Adam McKay, executive producer. “He’s one of the sharpest and funniest truth tellers anywhere in the sports world.”

Jones said on Twitter that he’s not leaving ESPN, though, either before or after March.

in 2022, i'll be hosting a show for hbo called "game theory," executive produced by @GhostPanther et al. you'll see a release about that shortly.

a sports media question of this week was "is bomani leaving espn in march?"

the answer is NO. #TheRightTime will continue.

have a good day. i damn sure will.

And ESPN put this out:

It’s somewhat remarkable that three years after the launch of High Noon (which was then moved to not-noon and cut in half two months later before being eventually canceled in February 2020), Jones is now filming another talk show from New York, and one that seems even better on several levels. For one thing, the personal involvement of McKay is remarkable; McKay has had an incredible career, from Saturday Night Live through Anchorman, Talladega Nights, and The Other Guys through Eastbound and Down, The Big Short, Vice, and Succession, and it’s quite interesting to see him and his company involved with an HBO sports talk show. For another, a weekly show seems like a good fit for the kinds of issue-based deeper discussions Jones has often explored. And for a third, it’s notable to see Jones expanding his involvement with HBO; he’s previously appeared in HBO sports documentaries The Battle for Tobacco Road: Duke vs. Carolina and Runnin’ Rebels, and has contributed to Bob Costas’ interview show Back on the Record.

And Jones feels like a good fit for what HBO is doing in the sports space at the moment. Since getting out of boxing in 2018, they’re not particularly focused on live sports (HBO Max will eventually get some NHL streaming/simulcasts, but that’s more Turner Sports than HBO). But they’ve continued to do a lot on issues in sports, from the monthly Real Sportswith Bryant Gumbel through Back on the Record through a variety of sports docs across HBO and HBO Max. Jones’ focus on deeper dives and commentaries seems like a logical addition to that portfolio, especially in a weekly show. We’ll see how Game Theory turns out and how it’s received when it starts up in 2022, but there’s definitely some logic to this move for both sides.