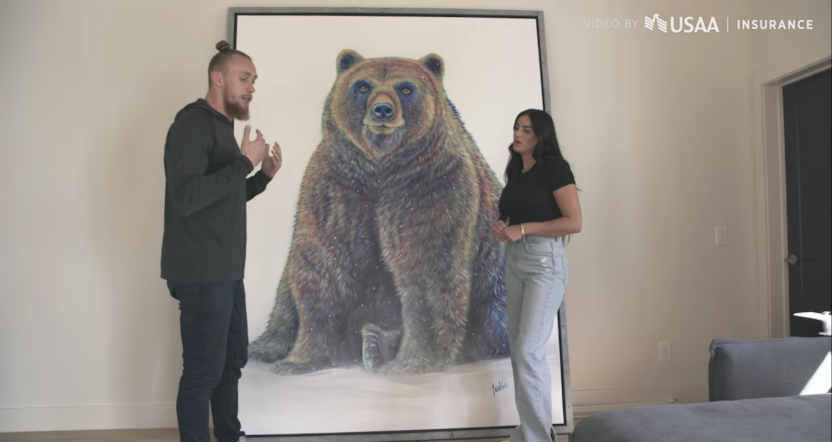 On Tuesday, ESPN debuted a new branded content series titled Home Base with USAA. The series, which will air on ESPN’s Facebook and YouTube channels, will feature six athletes showing off their homes and talking about their connections to the military; it started with a six-minute video featuring San Francisco 49ers tight end George Kittle, with upcoming installments set to feature fellow NFL players Chase Young, Justin Fields and Aaron Jones, plus MMA fighters Liz Carmouche and Randy Couture. This sort of episodic branded content on ESPN social channels marks a new step for the company, and Mike Denby, a senior vice-president at Disney Advertising Sales, spoke to AA Tuesday about the partnership between ESPN, USAA, and Publicis Groupe (USAA’s ad agency of record) that was needed to pull this off.

Denby said the series is the result of a close collaboration between ESPN, USAA, and Publicis.

“It was a work in progress. Everyone from conception was at the table in building this together: Publicis, USAA, and our CreativeWorks team, they committed to creating content and figuring out what that content was, which our CreativeWorks team does a great job of. They’re our in-house agency, and they really work with brands to try to get what the messaging is, what they’re trying to get out to the marketplace. And that’s where we are with Home Base, which I think came out fabulous.”

Here’s a promo video for the Kittle segment, including him showing off his barn-turned-workout facility.

A gigantic bear painting and a gym inside an old barn are all part of George Kittle’s Nashville home base. @USAA #ad

The full video can be seen here, and it features Kittle and his wife Claire showing off a seven-foot bear painting (seen above) at the start and talking about why that’s important to him. Denby said those kinds of personal glimpses into the athletes’ lives help make this notable and interesting content for viewers.

“It’s like Cribs for these athletes. You get to see their home. And then they tell their military story, their connection to the military and why that means so much to them. They’re great content. I loved the Kittle one where you run in and he shows the bear. It’s just a lot of really cool content, and I think with our vast scale on our social footprint, it should do really well.”

The social footprint is an interesting part of this. This is a content series specifically made for ESPN social channels rather than linear TV ad spots, which allows for that extra length. Denby said the social channels are also important because of the audience demographics there, and that led to the choice of SportsCenter on Snap host Gary Striewski to host these segments.

Denby said he’s thrilled with how the series came out, and it’s another feather in the cap for ESPN’s CreativeWorks team.

“They’re Emmy-winning. They’re probably only 18 months old at this point, and they’re certainly taking the industry by storm.”

He said this concept of partnering with brands for digital video series is something Disney’s looking to explore further.

“For multiple brands, we’re looking to do new, innovative content series. I think the idea is that Disney’s social reach is tremendous, and it’s an opportunity for brands to really take advantage of the scale we deliver on our social channels.”

The first Home Base segment with Kittle can be seen in full here.