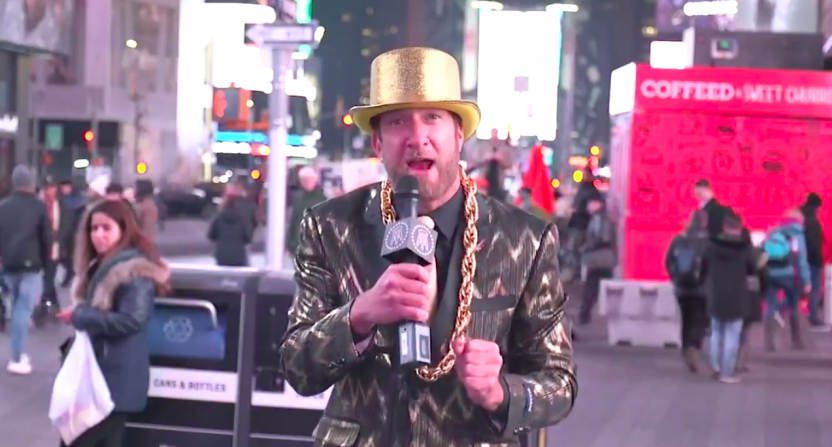 Barstool Sports has, well, a reputation. It’s well-earned and is one the company has been grappling with, in some small ways, in recent years as it attempts to grow its brand beyond the online bro crowd.

While they still cling to the culture founder Dave Portnoy and other Barstool personalities have cultivated for years, they’ve also expanded into bigger markets to compete with the likes of ESPN and Fox Sports. Pardon My Take has become a mainstay at the top of the podcast charts and the company has expanded its efforts into other shows. Meanwhile, they’re slowly but surely building a radio empire on Sirius XM. And while it was canceled just as soon as it appeared, their ESPN show was a sign that the big players were willing to play ball with them, in spite of their myriad troubling issues with misogyny, racism, cyber-bullying, and general dickishness.

For the most part, the company has pushed back against critics and dissenting opinions, citing that the boorish behavior they’ve built their brand on is essential to everything they do. To lose that and “go corporate” would betray everything they stand for, in their minds.

That all-or-nothing approach has softened slightly recently. After the latest dust-up between Barstool and Deadspin, Dan Katz, aka Big Cat, made an impassioned plea for more civility amongst the site’s worst offenders and commenters. As our Ben Koo noted at the time, “While this doesn’t seem like the most profound PSA, one could hope that Barstool is maybe turning over a new leaf going into 2019 after several years of constant warfare with….oh god, pretty much everyone.”

Earlier this week, Barstool announced the launch of Barstool Gold, a premium subscription model that comes with the usual promises of exclusive content and access. For $1 a week, subscribers gained access to video podcasts, bonus episodes of Pardon My Take and other Barstool podcasts, videos, and other features. The $2 per week tier includes the promise of office tours and other invites, free shipping in the company store, and exclusive merchandise. Subscribers could also just go ahead pony up for an annual subscription for a flat fee of $100.

Just a few days later, it’s clear that there is a demand for this kind of service. Digiday reported Friday that, according to Barstool, over 10,000 paid subscribers signed up for the membership service and 81 percent of them went right for the $100 annual subscription. That’s just within 48 hours of the announcement. Barstool Sports CEO Erika Nardini also told Digiday that around 51 percent of sign-ups were of that higher tier.

Coincidentally or not, Barstool made a separate announcement on Friday. Portnoy took to the blog to say that because the site’s comment section has become so unruly and is “getting worse and worse,” it is being closed under further notice. According to Portnoy, the comments section has seen an increase in racism and it’s become too much for the growing media company to allow.

I’ve made the decision to shut it down effective immediately until we can regain control of it.  And if we never bring it back I don’t care.  I don’t care if you hate me, hate Barstool, etc.  I don’t care.  The racist shit has to stop.    If we can’t stop it I’ll just eliminate it and that’s exactly what I just did.  People will blame Erika, Chernin etc.  Guess what they wanted to keep it and fix it.  I’m told it will cost our company money with clicks.  Guess what?  I don’t care.   It’s trash.  The people in it are trash.   Go read some other site.  Don’t care.  Bye losers.

On paper, that’s a great move. Comment sections very easily turn into cesspools on even the most well-intentioned platforms and news sites. Given the kind of content Barstool creates and the atmosphere it’s fostered for years, it would surprise no one to learn that it’s comment sections are filled with the worst of the worst.

However, it’s hard not to wonder if there’s a connection between the timing. The same week the company launches a successful new business model that invites membership and exclusivity, they also shut down the core component of the site that invites everyone and anyone to participate. Consciously or not, the two changes signal a shift in thinking about how users interact with the site and what’s acceptable.

The real question is whether or not those same troublemakers in the comments will still be welcomed behind the paywall. Barstool’s policing of the public-facing part of their site is a sign of good faith, but it’s hard not to wonder if it’s also a smokescreen to make for the fact that “what happens behind the paywall stays behind the paywall,” so to speak. It’s a smart business decision, but is it also a smart way to maintain the “anything goes” attitude the brand was built on without admitting that’s what they’re doing?

Call it The Howard Stern Model. Faced with one too many backlashes and a changing business model, Stern took his talents and built-in audience to satellite radio. There, he no longer had to worry about censors or advertisers or whether not he’d piss off anyone because his audience was paying directly for his content and happy with it. If others complained, they no longer had to listen.

The internet works a little differently, but the idea is the same. Without comment sections and within a membership model, Barstool effectively does the same thing to an extent. They can’t control what happens on social media in their name, and their cast of characters will likely still be prone to causing headlines for the wrong reasons. But at least now they can say that if you don’t like what their selling you don’t have to buy it.