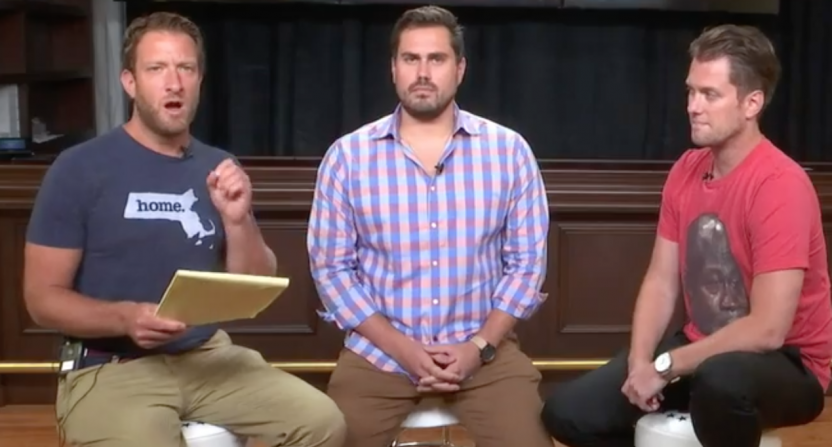 The sports blogosphere’s version of the Hatfields vs. the McCoys took an interesting twist today as Dan Katz, aka Big Cat, took to Barstool Radio to try to extinguish another flareup between eternal rivals Deadspin and Barstool Sports. The backstory for this week’s chapter traces back to an article penned earlier this week by Deadspin’s Samer Kalaf entitled ‘The Barstool Sports Gang Had a Blackface Whoopsie,” which is basically exactly what it sounds like.

After that article went live, Kalaf tweeted the following.

Sometimes, if you write something critical ofBarstool Sports, one of their readers finds/emails your gf to tell her you're about to be arrested for sexting an underage girl, his "friends younger sister," for the past year. Truly the "Barstool difference"

One more thing: Dave Portnoy fully endorses and encourages this kind of shit toward anyone who mildly criticizes him, not just me. Others get it far worse https://t.co/3uHIEaYTxw

Alarmingly, this type of behavior and friction between the sites is more or less a monthly (if not weekly) occurrence, and it’s been that way for awhile. But what’s newsworthy here is Katz’s impassioned plea for more civility, which is transcribed below.

“I gotta speak up about something that’s bothering me. Everyone knows the Deadspin-Barstool “rivalry” or whatever you want to call it. If we’re being honest here, they hate us, and I think there’s a lot of mutual hate. We’ve done stuff back, and it’s bad on all sides. I saw one of the Deadspin writers, and I don’t want to get into the details, but he said that someone was basically harassing his significant other. That is the most disappointing shit I could possibly see happen. I love this company and have so much pride in this company. I know how many people listen to Barstool, enjoy Barstool – it’s millions. And I know there’s only a few out there that ruin it for everyone. But I guess what I really wanted to say is that we need to start policing each other a little better, and that starts with me. I know PFT also agrees with this, because we had a talk about six months ago about speaking up when you see shit like this and saying ‘cut it out, it’s not cool, it’s actually borderline very, very fucked up.’ He wasn’t here today, he’s in Austin, but he would have said the same stuff if he was on Big If True.

Essentially, it comes down to if you’re trolling people online in a mean-spirited way, if you’re harassing women online, if you’re harassing men online, just because they disagree with you, just because they write a hit piece, cut that shit out. It’s not cool, and if you see someone else doing it, tell them to cut it out and start policing each other because I love this company so much and I think we do so much good stuff. If you saw the video we played for our Christmas party, it was so cool to watch that and see how big we’ve become, how many people we’ve hired from different backgrounds. The Stoolies raised $875,000 last year, and when we have a few people who go after people because they don’t like us, and look – if they don’t like us, they don’t like us. We deserved that piece. That was a bad look for Barstool, a bad look for Gaz, and we deserved it, and he had every right to write it. Don’t go and say “now I’m upset and now I’m gonna go attack people.”

Listen, you don’t need to do that. We don’t need that kind of defense. What we need is people saying, “Barstool is more than what the perception is. It’s a ton of people, 100 talented people, doing different things every day, making people laugh in different ways, raising money, and doing all these things.” That’s the story to be told, not “we need to start defending every single slight and every single person that comes at us.”

So that’s my piece. If you see it, tell people to cut it out. If you see it, you can tell me, and I’ll tell them to cut it out. And don’t do that shit. It’s scumbag shit. If you’re e-mailing a writer’s significant other or a writer and threatening them in any way, you are a complete asshole and I don’t want you consuming my content.”

You could title this as “popular, sensible internet personality lobbies tribal audience to quit being psychotic assholes,” and while this doesn’t seem like the most profound PSA, one could hope that Barstool is maybe turning over a new leaf going into 2019 after several years of constant warfare with….oh god, pretty much everyone. There is a “Barstool against the world” culture ingrained throughout the company, and the fanbase has a tribal mentality to it. More or less, “we *belong* here, because we don’t belong anywhere else” and a real or perceived slight at the company is a slight to just about everyone invested in the company.

Almost any attack on the company, regardless of merit, intent, or severity, solicits a tsunami of cruel and often never-ending harassment. With Barstool, the ethos generally seems to be “we always hit back, we hit harder, and we always get the last hit in,” and unfortunately, it’s never a fair fight. You can argue a lot of these internet brouhahas are not started by Barstool itself, but the company and its fans have rarely, if ever, opted to let any criticism slide rather than elevate it into a rubbernecking-worthy ten care pileup.

A sliver of the audience gets off on it and, candidly, that’s because Barstool president and founder Dave Portnoy is often doing his best Braveheart impression and gets everyone riled up behind him (what Kalaf was eluding to). Perhaps he’s right in some instances, and perhaps he genuinely feels as passionate about defending his brand as he publicly displays, but it can’t be denied that the frequent rally cries to go all in have served as a key ingredient to the brand’s meteoric growth. It’s reminiscent of high school, when you and your friends would go to a park for a fight, except Barstool’s audience outnumbers just about everyone and has the petulance to jump into the fracas often with baseball bats. I guess there is something to be said about the unique camaraderie of of reveling in another internet victory with your fellow bros.

As criticism has grown, Barstool has marched along as merchandise sales, radio, and mediocre amateur boxing has allowed the company to not give a shit about what sponsors think. This next year we’ll likely see a subscription offering and perhaps the launch of Barstool branded sports bars. That’s a long ways of saying that the normal levers of tempering down a controversial media outlet’s rhetoric has had had no effect on the company. We often get nudged to write more critically about them. I’m often asked why certain individuals at the company or business partners aren’t more proactive in steering the brand into a more congenial inclusive brand. That’s not going to happen. That’s not them. That’s not how they got as big as they are and, more importantly, that’s certainly not Dave Portnoy. The whole empire was built on a foundation of doubling and tripling down on things other outlets would be skittish to endorse.

I’ve long believed that any change in the company’s modus operandi of swarm, swarm, dox, and attack would continue as long as Portnoy didn’t get too much pushback internally from significant personalities within the company. While Portnoy’s fingerprints are not on this latest dustup, Katz’s plea here, as well as his partner’s similar thoughts from earlier this year, are perhaps serving as a resonating voice of reason within the company that Barstool’s territorial feistiness is no longer a unifying culture building exercise, but rather an internally divisive and embarrassing boondoggle that has real life consequences. I mean that’s what it is, but you don’t get the same yucks and pats on the back by taking the higher road and ignoring criticism.

Many people wish that Barstool would go away or lose their jagged sharp comical edge. That’s not realistic, but perhaps we’ll see the company, Portnoy, and the Stoolies come to the realization that the reactionary warfare with critics is a taxing, never-ending exercise that not only brings further external condemnation but also is increasingly unnerving to significant voices and influences within the ever-growing Barstool empire. Perhaps I’m naive here, but I’ve got to think that at some point, the company would prefer to focus their energy elsewhere rather than showing up to a park every month with baseball bats.