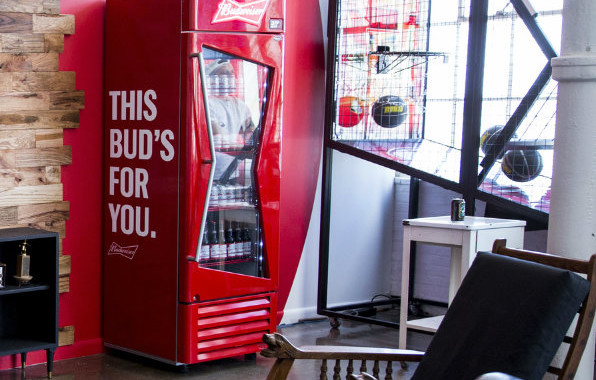 We’ve seen Derek Jeter’s first-person athlete journalism site The Players’ Tribune finding plenty of success, and it’s recently been boosting its video efforts with partners like AOL. It’s also been ratcheting up its sponsorship, with even events like their coverage of Michigan’s signing day finding significant sponsors. Now, as Sahil Patel of Digiday writes, TPT is taking video and sponsorship partnerships to a new level by opening a Budweiser-sponsored video studio:

The digital publication, which Jeter started in 2014 to tell athletes’ first-person stories, and the brewer have launched a short-form content studio for videos and photos destined for Facebook, Instagram, Snapchat and other social platforms.

In-house agencies are not new for publishers as they try to cash in on the shift to branded content by advertisers. TPT Studio B, as it’s dubbed, is slightly different in that Budweiser is the exclusive partner for the studio, with the potential for that to be extended. Budweiser’s exclusivity means other sponsored content produced by The Players’ Tribune won’t be shot inside the studio.

As of now, the Budweiser partnership runs for six months, and TPT Studio B is on the hook for producing 44 pieces of content — including videos, photos and written pieces — for the partnership.

The studio is based in the Players’ Tribune’s New York headquarters. The physical location has multiple sets and includes a player lounge, photo booth, a Pop-A-Shot game and even a piñata that can be used in shoots. The first videos will be “Moments of Greatness,” in which athletes like Boston Celtics guard Isaiah Thomas talk about pivotal moments in their lives in and away from the game; “Fair or Foul,” where athletes weigh in on pop culture topics; and “Pop-A-Shot,” featuring athletes playing the eponymous arcade game.

What’s also interesting here is that this goes just beyond the obvious branding, such as having Budweiser signs and cans visible during different interviews. Budweiser is also going to have significant input into the content produced in the studio, including which athletes are featured:

As part of the deal, which was handled by MediaCom, Budweiser beer and other branded swag are prominently placed at the physical studio location. It will appear in the content produced on-set, such as a video rolling out later this week of Mets pitcher Matt Harvey grilling barbecue with Budweiser beer cans in the background.

Budweiser’s very involved in the development of TPT Studio B content, said Lucas Herscovici, vp of consumer connections at Anheuser-Busch. “That means aligning with athletes that are great representatives of the brand and aligning on ideas that resonate with the brand values and campaigns,” he said.

It will be interesting to see just who does and doesn’t “align” with Budweiser. Given their anti-craft beer ads, do they throw out anyone who’s ever been spotted drinking something else? Or does their “America” campaign mean that only American athletes will be featured? With their “Not Backing Down” slogan, perhaps they should consider the likes of punch-throwers Rougned Odor and Dahntay Jones. All jokes aside, though, this is an interesting level of involvement for Budweiser, but it’s not necessarily a terrible one. A lot of these segments were intended as lighter lifestyle things anyway, which probably aligns with what Budweiser wants to do, and it’s notable that TPT can still shoot other segments in this studio (just not other sponsored ones).

In some ways, this push towards further sponsored content makes sense for TPT. Much of their appeal is giving fans a look inside the lives of these athletes, and light videos like these can be a good way to do that. There’s appeal for both them and Budweiser, too, as these videos will live not just in a special Budweiser-branded section on the TPT homepage, but will also be distributed on TPT’s extensive social platforms (and the amounts of Budweiser branding in there will make sure the advertiser’s message still gets across). It’s an interesting new development, and one some other outlets may consider. It maybe makes even more sense for a place like TPT, though, where a lot of sponsored content feels relatively natural.