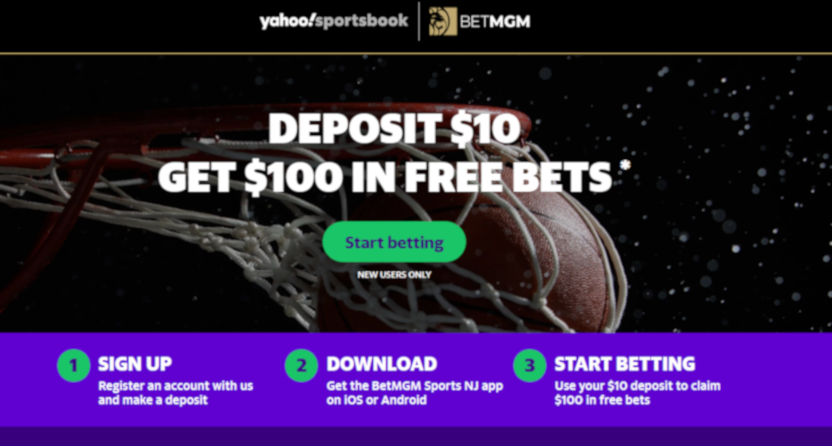 Last week saw Yahoo launch “Yahoo Sportsbook powered by BetMGM,” a gambling-focused portion of the main Yahoo Sports app that offers odds viewing everywhere and in-app betting in New Jersey (for the time being; they plan to expand the betting portion to other states). That came only a couple of weeks after they signed a multi-year partnership with BetMGM. Yahoo GM Geoff Reiss spoke to Awful Announcing after last week’s launch, and said sports gambling is a valuable area for Yahoo to pursue given that their users already are focused on following specific teams and on fantasy.

“It’s an important thing for us because it basically gives us another way to provide fans with a whole new level of engagement through sports, and being able to ultimately take as much friction out of that process as possible, and have them be able to bet on their favorite teams and their favorite players right in line with the experience that they’re already using. We think that’s a huge opportunity to serve them better. And the two things that we are best at, fantasy and being able to connect fans with their favorite teams, are the two drivers that drive the sports betting industry. That makes us a very important player here.”

Reiss said the decision to make this an in-line part of the main Yahoo Sports app rather than a standalone app (it will also be integrated into the Yahoo Fantasy app beginning next year) was to try and take advantage of the user numbers they already have.

“Our ultimate goal here is to take as much friction out of the process as possible. It’s a little like the old Willie Sutton line; ‘Willie, why do you rob banks?’ ‘Because that’s where the money is.’ That’s where our fans are. On an NFL Sunday, between our fantasy apps and our core apps and our desktop platform, we’ve got 13, 14 million people passing through Yahoo Sports. So finding a way to effectively convert as many of those folks who want this experience and are of age and live in legally addressable states gives us an enormous competitive advantage as opposed to going out from scratch and trying to start building a new app that customers want.”

There are plenty of betting options out there, but Reiss said their offering will distinguish itself thanks to Yahoo’s existing users and thanks to synergies with what else they do.

“Our product is going to stand out on a couple of bases. First and foremost, we’ve developed an incredibly high level of trust and confidence in our brand from fans over the course of the 20-some-odd years that we’ve been in business. So first of all, they know us and they trust us. Two, we’re already serving the fan, we’re already connecting them on the things that they’re most passionate about in sports, and that’s coverage of their favorite teams and a fantasy platform that’s better than anybody’s in the industry. So the combination of trust in our brand and the fact that we already live in the sweet spot of what drives these folks to sports puts us in a unique position to basically be their provider as they start entering into this new category.”

Yahoo Sportsbook is starting off small, though, especially with actual betting only allowed in New Jersey for now. Reiss said it’s worth keeping in mind that the offering they have out there right now was launched only a couple of weeks after their partnership with BetMGM, and it’s going to change rapidly as time passes.

“What you’re seeing are literally the most baby of baby steps here today. It’s the beginning of a long multi-year commitment to build this category.”

He said it was important to get something out there fast and start building on it, though.

“For me, one of the most exciting things about this whole industry is that it’s evolving in real time and moving so quickly. What that means is that you want to start gaining real-time experience and understanding how content and betting opportunities are going to intersect, and what kinds of things are going to serve fans best. In order to do that, you’ve got to get into the game, you’ve got to get going, and you have to start trying things. And all I can promise you is that this is going to be an incredibly iterative experience that continues to morph significantly as we learn stuff and as the laws in individual states continue to evolve.”

Reiss said he sees the current Sportsbook as something similar to early efforts in other fields, and he expects it to grow and improve as time goes on.

“I don’t know if you remember the first time you ripped a song off Napster in six minutes and you’re like “Holy smokes, I can’t believe this! This is like the coolest thing in the world!’ And now, if you couldn’t download an entire album in 10 seconds, you’d be like ‘What’s wrong?’ So what we have to make sure is that we bring our expectations in an emerging field to know that this is going to be very much a crawl-walk-run thing. It’s exciting to get going, and it’s an even more exciting journey to see where it’s going to take us.”