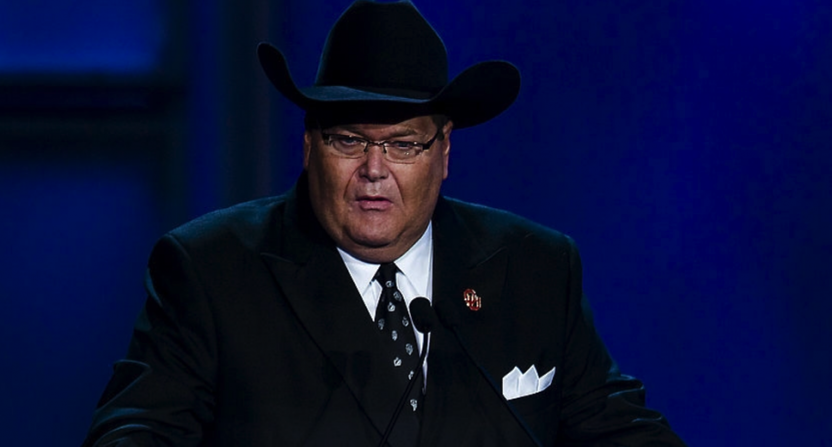 WWE is a company built on nostalgia and the familiar. There’s a good reason that Dave Bautista is returning to action to (presumably) take on HHH at WrestleMania this year despite the fact that neither has been full-time wrestlers for years. They’re familiar legends who can hook the interest of older fans while also providing historical context to newer ones. It’s why we’ve seen The Undertaker, Shawn Michaels, and even Hulk Hogan trotted out over and over again in recent years.

So it’s a rare thing to find out that the sports entertainment giant would purposefully walk away from working with a legend, especially one so synonymous with their specific brand. That will be the case, however, when Jim Ross’ contract expires at the end of the month. And according to the legendary announcer, he’s moving on despite the fact that he thinks he’s still got more in the tank.

“I still think I can do play-by-play even though others that may surround Vince think I can’t,” he said on the latest episode of his podcast. “I’m 67, I still feel I can get the job done doing wrestling play-by-play, and I want to explore that opportunity and possibility.

Ross initially left the company in 2013 after twenty years working for them, having been inducted into the WWE Hall of Fame in 2007. “Good ol’ JR” returned in 2017 to call the WrestleMania match between The Undertaker and Roman Reigns. Afterward, he signed the two-year deal that is now expiring, in which he called events such as the Mae Young Classic and WrestleMania 34’s André the Giant Memorial Battle Royal. His most recent appearance with the company was during a pre-show for the Greatest Royal Rumble last April.

Ross told TMZ he has no hard feelings and that he leaves “with great thoughts, very positive.” However, the rumor mill is already circulating that JR will end up working for the company’s new upstart rival, All Elite Wrestling (AEW). No deal is in the place yet but the promotion (backed by the Khan family, owners of the Jacksonville Jaguars and Fulham) has been stockpiling a solid collection of talent formerly associated with WWE, including Chris Jericho, Pac (a.k.a. Neville), Cody Rhodes, and Billy Gunn (as a backstage producer). While the company is also trying not to repeat the mistakes of promotions before them by only focusing on former WWE talent, the addition of Ross to their announcing team would add some much-needed gravitas and provide an inroad for WWE fans to seek out their Double or Nothing event in May.

Ross also said Thursday on his podcast, “The Jim Ross Report,” that he feels as though he needs to keep working. “I still want to play in the game,” he said. “I still want to stay busy.” So whether it’s AEW or elsewhere, you can expect to hear Ross’ Oklahoma drawl once more. And who knows, the way WWE loves to bring legends back into the fold, it’s entirely possible that Ross will be back there again one day. It’s amazing what a little competition can do.