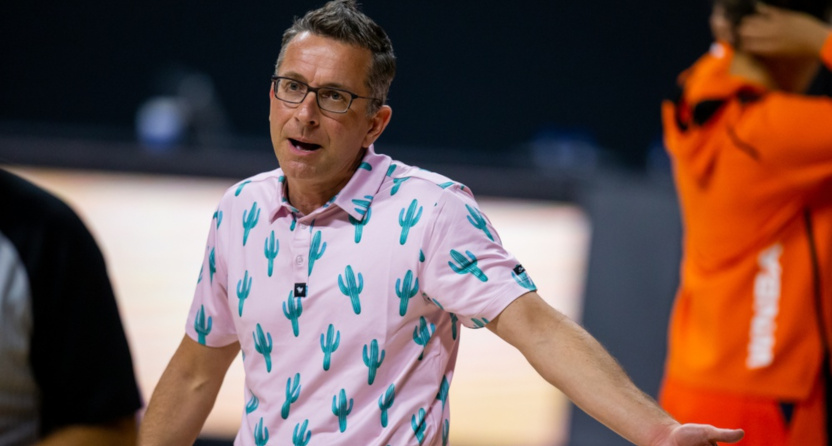 During Sunday’s Connecticut Sun-Las Vegas Aces WNBA game, Sun head coach and general manager Curt Miller said something to a referee lobbying for a call against Aces’ center Liz Cambage. Cambage later posted a series of videos on this to her Instagram‘s Stories page Sunday night (they’re gone now, but can be seen on Twitter here), saying “The next time you try to call out a referee, trying to get a call, being like ‘C’mon, she’s 300 pounds!’, I’m going to need you to get it right, baby! Cause I’m 6’8”, and I just double-checked, because I love to be correct and get facts, I’m weighing 235 pounds.” Miller (seen above during a September 29, 2020 game, also against the Aces) apologized Monday through a statement, and the league announced a fine and a one-game suspension for him Monday night:

The following was announced by the WNBA: pic.twitter.com/aaFvwW2tdw

Statement from Curt Miller re: his comments about Liz Cambage during the Sun's game against the Aces last night. pic.twitter.com/kgQorYIIlQ

Other notable elements there include Cambage saying “I will never let a man disrespect me” and “To the coach of Connecticut, I’m sorry, little sir, I don’t know your name,” plus her saying “I’m very proud of being a big b***h, big body, big benz, baby.” And she later says she talks trash during games, but considers that different with it being between players rather than from a coach to a ref, and talks about how she didn’t respond during the game because she was doing her job.

It’s interesting to see a coach called out for his remarks by a player on Instagram, and to see that lead to an apology from the coach and a suspension and fine from the league. And it’s interesting to see so much of this play out on social media, and there’s a lot of logic to that. If Cambage had gone after Miller directly during the game, that could have led to a technical foul for her and cost her team. If she’d addressed this directly after the game in comments to the media, this might have played out a little differently, especially if video of those comments wasn’t immediately available; in that case, we’d have to rely on others’ transcriptions, and what they chose to include or not.

Instead, Cambage posting this to her own social media platforms gave her time to think about this, and to get her whole message out exactly the way she wanted without intervening questions from reporters. And it means her whole response can be seen directly in full context by anyone interested. And it shows the power of those platforms to let athletes get their messages out in the way they choose. That’s been a growing trend in recent years, whether it’s specifically with social media or with ventures like The Players’ Tribune, Uninterrupted, and video and audio podcasts. And the Cambage/Miller case is one more example of the platforms athletes have now, and the impact their comments there can have.