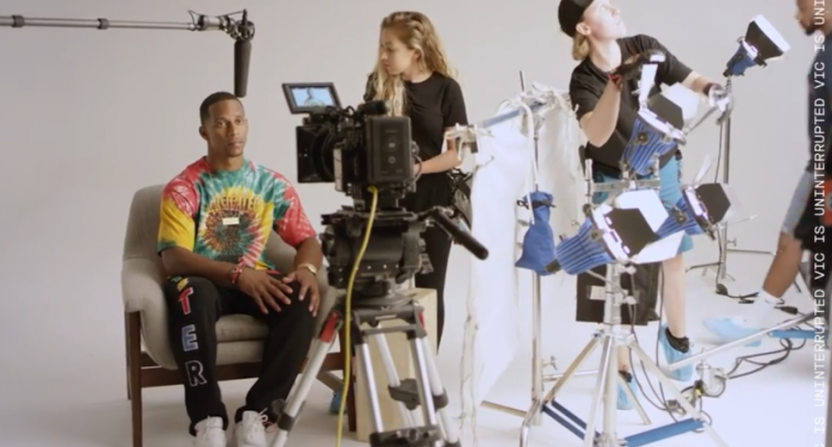 Former New York Giants receiver Victor Cruz has retired from the NFL to begin a media career with ESPN, but he announced that move through another media company’s platform; Uninterrupted, LeBron James’ digital network. The 31-year old Cruz shone in college at UMass, but went undrafted in 2010 and was signed by the Giants. He played in three games for them that year before a season-ending hamstring injury and really shone for the team from 2011-13, including in their 2012 Super Bowl win (he also earned a Pro Bowl nod in 2012 and a second-team All-Pro selection in 2011). However, Cruz battled injuries after that and was released last February; he signed with the Chicago Bears, but was released last September and didn’t land elsewhere in the NFL.

Here’s his retirement announcement from Uninterrupted, part of their “More Than An Athlete” series:

“The game of football has just given me so much. As soon as I got on that practice field, as soon as I put on those pads and that uniform, it was a place of kind of zen for me. My journey hasn’t been the easiest, it’s definitely had its ups and downs and its rough patches, [but] this last chapter of my life was a great one, to win a Super Bowl, to play in a Pro Bowl, to have my daughter be born throughout all this as well.”

“Football’s given me an amazing platform to do all kinds of things outside the game; having a New York Times best-selling book, designing my own sneaker with Nike. If it wasn’t for football, that wouldn’t have come to fruition, and that’s a tremendous chapter to close. But I’m excited to close that one and open a new chapter and join the media world with ESPN. I’m excited for the future, I’m excited for the next chapter, I’m excited for you all to be a part of this with me, and here we go.”

That’s not a bad way to do a retirement announcement, but it is somewhat funny to see Cruz take to Uninterrupted to announce he’s taking his talents to ESPN, especially as many of ESPN’s other new NFL analysts have just shown up on the network to make their own announcement. (including DeMarco Murray, a newly minted Fox college football analyst, last month on NFL Live.)

But hey, whatever works for him, and he does have an existing relationship with that network, cohosting “The Victor Cruz Show with Paul Rivera, a ‘barbershop talk’ style conversation about sports, music and fashion.” (This is not to be confused with The Shop, the LeBron James-starring barbershop talk show that began on Uninterrupted, sparked a trademark dispute with Nick Saban and Alabama football’s Shop Talk, later led to a lawsuit from a Michigan businessman who claimed the idea of a barbershop talk show came from him, and then became a HBO series. LeBron probably isn’t going to threaten to sue his own company, so any issues with “barbershop talk” conversations may come from elsewhere.)

At any rate, that explains why Cruz made his announcement on Uninterrupted rather than ESPN. Here’s more on the move from ESPN Media Zone:

A seven-year NFL veteran and a 2012 Pro Bowl selection, Cruz will contribute to NFL Live, Get Up!, SportsCenter, ESPN Radio and other ESPN platforms year-round. He will make his ESPN debut Wednesday (Aug. 22) during the 9 a.m. ET hour on both Get Up! and SportsCenter.

…Adds Seth Markman, ESPN’s senior coordinating producer, NFL studio shows: “Victor is passionate about the NFL, and we’ve long been impressed with his ability to connect and engage with fans. He has a deep knowledge of the game and experience playing at the highest levels, so we expect him to be an impactful voice.”

…Cruz has made a number of appearances on ESPN through the years. He has presented at The ESPYS, attended the Winter X Games, and he was part of a 2014 This Is SportsCenter spot. He most recently appeared as a guest analyst on NFL Live in January.

We’ll see how Cruz slots into the ESPN lineup of NFL analysts and how he does there.