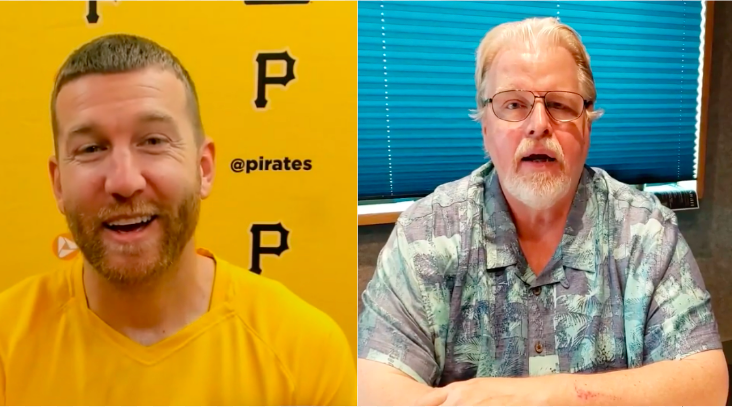 Todd Frazier’s time with the Pittsburgh Pirates will likely be remembered more for how it ended than how it actually went.

The 11-year Major League Baseball veteran signed a minor-league deal with the club in March, joined the active roster in April, and was designated for assignment on May 10. That was fairly understandable considering he hit just .086/.200/.114 in 40 plate appearances with the club.

One person who wasn’t sad to see Frazier go was Mark Madden, who hosts a weekday afternoon show on local station 105.9 The X. The oft-outspoken Madden, who has made a number of controversial remarks over the years, dabbled in Twitter beefs, and was once fired from a radio job over his comments, made his thoughts on Frazier’s departure pretty clear on Twitter.

A scant 13 minutes later, Frazier responded, calling Madden an “absolute slob” and included a photo of Madden to dress him down further.

Funny that this slob, i mean absolute slob is talking shit. Go grab another hot dog. Please look yourself in the mirror my goodness. You wouldn’t dare say this to my face FLOUNDER. love your nickname btw. This picture tells it all ? and to think people take you serious. GTFOH pic.twitter.com/kpLLNpdLHb

Madden took the bait but responded with a very solid comeback.

That's a solid hit. Rare for you. I'd gladly say it to your face. The Pirates could use the attendance. Bat-shaming . > fat-shaming. I was here before you got here, &here after you're gone…&it didn't take too ***king long. Cut by the Pirates. I've had career lows. Not that low. https://t.co/NOCnOvvK8O

After that, Frazier tried to claim victory, retweeting supporters. Meanwhile, Madden reiterated his disdain for the now-former Pirate while taking on all comers in his mentions, but not before throwing out a few more parting shots.

You got cut by the worst team in MLB, &you're waging Twitter war. Wow. Pack your ***t& get the ***k out. I'm assuming you rented. You couldn't have been dumb enough to buy. Then again… https://t.co/UJF4Elf78Q

Frazier is no stranger to recent run-ins on Twitter with media members. When he debuted in April for the Pirates, he tweeted that he was expecting a “miserable tweet” from columnist Dejan Kovacevic, who had written that he thought Pittsburgh should sign Phillip Evans instead.

Hey Honey Dijon. I mean Dejan. Sorry pal. I’m waiting for your miserable tweet about me getting called up. Let the people know big shot. You’ve been preaching it for a long time now @Dejan_Kovacevic #LetsGoBucs

See? Here's proof that we cover the Pirates critically. Directly from @FlavaFraz21 himself.

Sorry, Todd, I felt Phillip Evans was the better roster choice this spring. It's not like he's proven that wrong. He's been excellent, I'm sure you'd agree.

Congrats on the promotion.

Kovacevic, who was offended by Frazier’s bastardization of his name, also made note of Frazier’s recent comments accordingly.

All class, this guy. Like a living, breathing ‘Steve Holt.’ He’ll he missed … by no one. Least of all by Derek Shelton. https://t.co/uNF0NC9Jmj

It’s not entirely clear why Madden took such a strong shot at Frazier to kick things off, other than that the player seemed to make a habit of burning bridges with any media members who criticized him. Clearly, it looks like everyone will be better off with these two being in different cities moving forward.

And just an FYI to anyone covering Todd with another team, if that happens, he’s almost certainly going to be paying attention to what you say about him. You’ve been warned.