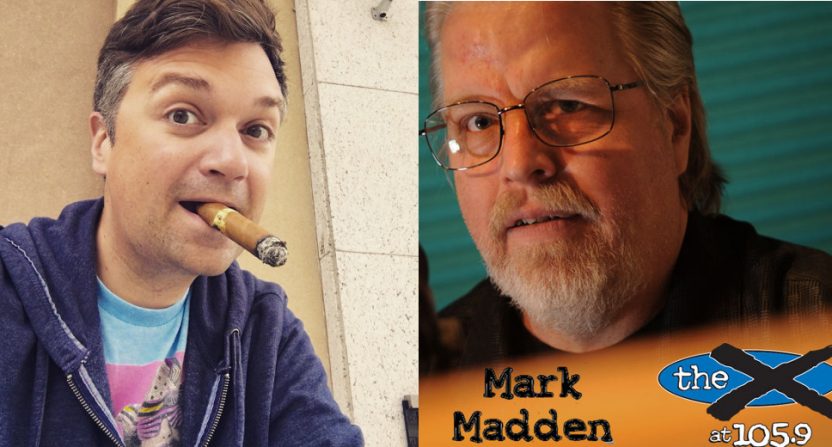 Welcome once again to Twitter Wars, where we cover sports media feuds on social media.

From his time at Yahoo’s Puck Daddy blog through his current role with ESPN, Greg Wyshynski has long been active on Twitter, and known both for jokes and for some feuds with certain crusty members of the hockey media. Meanwhile, Pittsburgh media personality Mark Madden (who’s a host on radio station 105.9 the X and WPXI-TV,  writes for everything from the Pittsburgh Tribune-Review to NHL.com, used to write for the Beaver County Times, and was a commentator for World Championship Wrestling) has been known for plenty of feuds and controversial remarks of his own, including getting suspended and then fired from a radio job at the Pittsburgh ESPN affiliate after saying he  “hoped Senator Kennedy would live long enough to be assassinated,” floating speculation about Jerry Sandusky’s charity “pimping out young boys to rich donors” and more.

The two crossed paths on Twitter Wednesday, and sparks flew.

This all started with Wyshynski tweeting out an ESPN.com story of “Did Penguins protect the wrong goalie from the expansion draft?”, one pondering if they might have been better keeping Marc-Andre Fleury then Matt Murray:

Did Penguins protect the wrong goalie from expansion draft? https://t.co/pLigGHNUXO

That led to a lot of backlash, as you can see in the replies, and a lot of flak for Wyshynski from Pittsburgh fans and media. But the only problem there? He didn’t write it. It’s a piece by long-time ESPN Insider columnist Rob Vollman. And Wyshynski tried to point that out, and compared this to the backlash he used to get at Yahoo over the eulogies for teams upon their playoff exits (which were written by rival fans, not him):

I just want to note, since the vast majority of the responses here are from people who didn't click through: Not my column. https://t.co/mXuBrPuzeh

I think I need a new policy where I include any author's name with the link I send out because this is really ruining my perfectly nice morning of dunking on the Senators. @robvollmanNHL wrote this. Leave me alone. https://t.co/dpVbEMBHNE

As someone noted, it was much better when everyone assumed I wrote the eulogies rather than the Fleury/Murray thing. pic.twitter.com/Blmtwdvh89

Some of those responses tagged Madden, who’s often defended local players and teams against any perceived slight from out-of-town media. (Consider his column Wednesday on how Sidney Crosby is still way better than Alex Ovechkin as an example.) And Wyshynski then sent out a snarky tweet about Madden:

I don't know if there's another market with more "DADDY PLEASE NOTICE ME" tweets to a single radio host than from Pittsburgh fans. Which I guess is a tribute to him.

Which led to a whole giant war, with Madden declaring Wyshynski was flushing the legacy of past ESPN NHL writers Pierre LeBrun, Craig Custance, and Scott Burnside “down the toilet,” Wyshynski comparing Madden to a washed-up DJ, Madden calling Wyshynski a scab, and more:

Jesus, I was trying to pay him a compliment. Do I have to go down to Shecky's Ford in Monroeville for the meet and greet and explain it in person? Here's Candlebox… https://t.co/PMgdGeR1Hk

Keep trying. You'll be funny one of these times. It'll be the first time, Mr. Pennies on the Dollar. You're a cheap replacement. A scab player. &you'll be out before you know it, b/c what you're doing just isn't good. https://t.co/VHSw3nIQIr

Wyshynski had some further comments on Madden (and on his accusations) in replies to others:

It's really, truly, absolutely not. I wouldn't trade anything with him. Jobs. Lives. Mostly saliva.

He's already done the "not funny/fired soon/tarnished the legacy of those who came before you" bit, and I'm guessing next is how much he makes, because that's Phase Two of his Mad Online bit. It's like The Matrix. It just happened over and over again, like programming.

They did great work here, and I'd never try to emulate that. We do something different, it's really working, and I'm happy about that. But he thinks it's a sore point, so whatever gets you Mad Online I guess.

Yeah, I watched him get his lunch stolen by the Barstool guys. You can always tell when he's been humbled because the next week is a typhoon of subtweets and desperate attempts to punch up to get a rub from someone better.

From this corner, Wyshynski’s the winner; the DJ references could be better, but “soft, comfortable low-stakes unheralded life of local celebrity” is a decent shot, and Madden’s “scab” comments are pretty ridiculous; it’s not as if Wyshynski directly took the jobs of those other writers or had anything to do with ESPN’s layoffs, as “scab” would imply. He was hired months later. And even if he’d turned down ESPN, that wouldn’t have brought the other writers back. So from here, it looks like this went about as well for Madden as say, his encounter with Tank Abbott:

Have your say on the victor below: