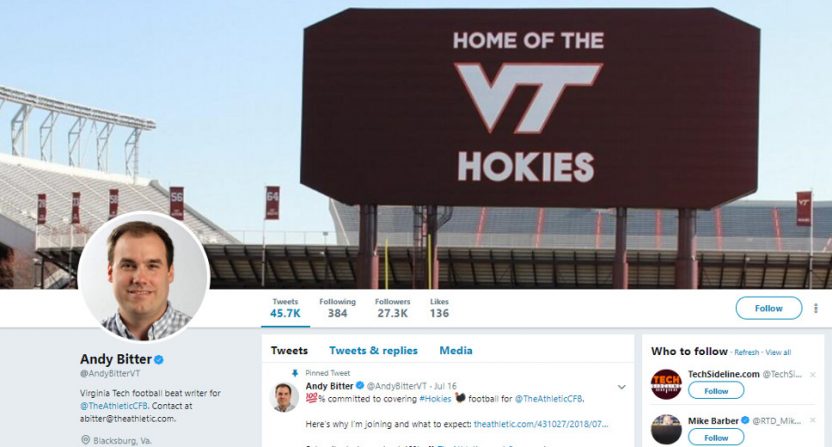 The Athletic’s impressive additions of writers, experts, and local reporters over the last few years have drained many newspapers of some of their top talent. That was always part of the plan, but you can’t blame local outlets for wanting to hold on to whatever they can in the fight to remain relevant and in business. That includes not just actual reporters, but also intellectual property they feel belongs to them.

That was what was at the heart of a lawsuit filed by BH Media Group, owner of the Roanoke Times, in August. The company wasn’t suing The Athletic for snagging Virginia Tech beat reporter Andy Bitter from them, but rather they were suing Bitter himself over ownership of the @AndyBitterVT Twitter account and its followers.

According to the lawsuit, Bitter had inherited the handle from previous Roanoke Times reporter Kyle Tucker and had acknowledged at the time that the company maintained ownership over the handle. The account had since accumulated over 27,000 followers from Bitter and his predecessor’s reporting and coverage. According to the lawsuit, BH Media said it would take them $150,000 and seven years (which just so happens to be how long Bitter was with the paper) for a new reporter to create a similar Twitter account with the same number of followers.

Bitter countersued later that month, alleging defamation and asking for $150,000 in damages. In his suit, Bitter noted that Tucker was contacted by the Roanoke Times to sign a sworn statement backing up their account of the situation, which he did not do.

Can a separate company “own” a username on a different company’s platform? And does it have the right to tell an employee to give it up when they leave the company even though they have been the one in charge of it the whole time? It also made a lot of reporters wonder if they needed to rethink the way they disseminated information on social media. Would you have to get an entirely new Twitter handle every time you change employers? What if you started the Twitter handle first, then joined a company, but later left for a rival company. Does that original employer have any rights to the account?

All of these questions and more were swirling around the outcome. The decision would echo through the halls of media companies across the nation. And in the end, that outcome was revealed to be…let’s just forget about it and move on.

“The Roanoke Times and I have agreed to drop our claims against each other and get on with our lives. I’ll continue to tweet from my account as I always have since I started covering Virginia Tech. If you’re inclined, consider following my successor at the Roanoke Times, Mike Niziolek, at @VTSportsRT. I look forward to continuing to report Virginia Tech football for The Athletic.”

It looks like Bitter just needed to give his replacement a #FF (on a Thursday) and that was that. Cooler heads prevailed and it looks like that murky grey legal area between social media, reporters, and their media companies will remain just that for the foreseeable future.