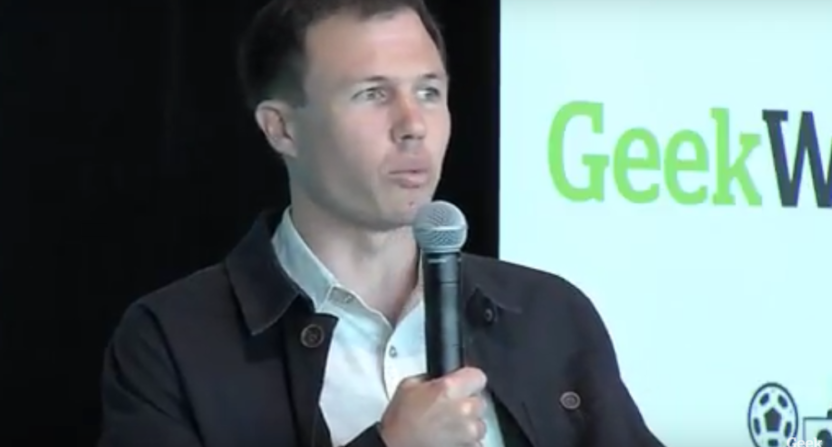 One of the big debates for publishers recently has been about Facebook, which is dominating a larger and larger share of online traffic and also trying to keep users within its ecosystem as much as possible instead of always sending them through to publishers’ websites. That’s created plenty of discussion about how publishers should use the site, and plenty of criticism of their practices as well. Bleacher Report co-founder and CEO Dave Finocchio offered some of both during a Q+A at the 2017 GeekWire SportsTech Summit in Seattle this week. Here’s Finocchio’s whole Q+A with GeekWire co-founder Todd Bishop:

And some of Finocchio’s comments, transcribed by GeekWire’s Nat Levy:

He noted that Facebook pushed publishers to use its platform as a way to spread content far and wide, but over the years it became harder to get stories linked back to a website promoted.

“I think the days of being able to drive massive referral traffic back to your website are coming to an end,” Finocchio said. “They’re coming to end because Facebook decided it’s best for them for you to stay on Facebook as much as possible.”

…But still, Facebook and Google are monsters in the advertising business, capturing 85 percent of share of online advertising growth and rising. Publishers who don’t play ball with these companies are going to have a hard time growing their audience, Finocchio said.

“If I have a lake, they have an ocean,” Finocchio said of Facebook and its nearly 2 billion monthly active users. “If I’m not playing in the ocean then I’m not attracting more customers myself, and so they are still the most effective way for us to reach audience consistently.”

…“I would just encourage them to think more long-term about what they’re actually doing to the publishing industry in an honest way and not just always think about their own internal (Key Performance Indicators).”

Finocchio makes some valid points in there, and some that will certainly be echoed by the wider publishing industry. Facebook’s shift to wanting more and more content to live on its platform entirely rather than sending people through to others’ sites definitely poses challenges for publishers’ current ways of doing business. And publishers can’t easily boycott Facebook entirely over their concerns; if they do, they risk losing out on a massive potential audience. Urging Facebook to think about the long term as well as their short-term goals isn’t a terrible idea, either.

However, while many publishers may share Finocchio’s sentiments, Bleacher Report’s own past issues (especially when it comes to accusations of fully lifting content in a way harmful to other publishers and producing little of value itself, criticisms that were often lobbed at the site before its 2012 acquisition by Turner) may make some more skeptical of him being a voice to follow here. That partnership has generally worked, and the site’s standards have improved (although there’s still been criticism of B/R, especially around layoffs, quote-stealing and kowtowing to Mark Cuban), but there are still many who have just as much of an issue with B/R as with Facebook. So just because Finocchio has some good points, it doesn’t mean everyone’s going to join him. (And it should be noted that he’s far from the only media executive to express sentiments along these lines.)

Overall, is Finocchio right that Facebook’s current practices probably aren’t ideal for publishers? Sure. And there are things they could do to make that relationship smoother, notably being more skeptical of fake news, being more apt to credit original pieces, and being more willing to send people off of their site. But they are doing some things, including paying some publishers to create both exclusive and initially-exclusive video content, as well as offering certain publishers  access to Facebook’s own ad-targeting tools. And maybe they can be convinced to do more.

But, as Finocchio says, it’s very difficult to negotiate with Facebook, as every publisher needs to be on there. And it’s not clear that an appeal to think long-term and boost publishers over themselves will really benefit Facebook. That’s especially true in the short term, and that’s the period that many investors often care about. We’ll see if anything comes of this, particularly as Finocchio doesn’t seem to really offer a prescription for change here, other than “Facebook should be nicer to publishers and less concerned about their own bottom line.”  Still, at the least, it’s very interesting to hear the head of Bleacher Report be critical of Facebook, an outlet that’s been crucial to their success to date.