It took years for Bleacher Report to go from an Internet laughingstock to one of the biggest and most respected sports media companies in the business, but only a month for them to piss most of that credibility away after a February that can only be described as an unmitigated disaster.

It started when B/R announced it was laying off nearly 50 employees to focus on social media and video content. The layoffs included King Kaufman, who was hired in 2011 to increase the editorial quality on the site. Another person laid off was college football writer Barrett Sallee, who then watched as Bleacher Report aggregated his reporting on the arrest of Oklahoma QB Baker Mayfield without any ounce of self-awareness:

Shortly after the layoffs came the beef with Sports Illustrated’s Peter King, who called Bleacher Report “despicable” for using a quote without attribution in which Tom Brady told King that Super Bowl LI wasn’t one of his best games ever. I don’t think the editorial staff left out the attribution maliciously, I just think they didn’t know any better.

Which one is worse?

Thanks for stealing a quote from an exclusive interview you did not get, @BleacherReport. Despicable of you. https://t.co/gRMJpCrH6y 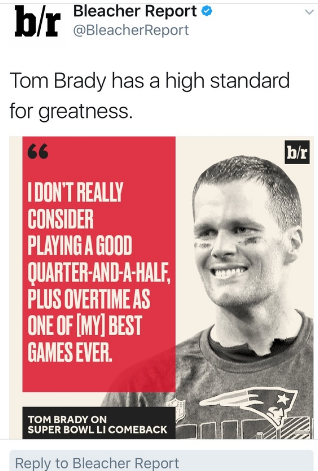 Then came the Mark Cuban brouhaha in which Bleacher Report’s Twitter account made a harmless joke by tweeting, “DIRK FOREVER” with a clip of him shooting an airball; it was deleted after an enraged Cuban bullied them into doing so.

It’d be one thing if this happened on the Dallas Mavericks’ Twitter account or the NBA’s league account. But it wasn’t. It was a joke by a media company that should have told Cuban to get a sense of humor and go pound sand. But because Bleacher Report is intimate partners with the NBA, B/R deleted said tweet and furthermore tweeted out this cowardly pseudo-apology.

Earlier today we deleted a tweet about Dirk Nowitzki. Dirk is an NBA legend in our eyes and will be forever.

And in a move that has made me sworn off visiting Bleacher Report in the future, B/R is running constant tiny auto-start ads in articles to rack up video views and ad impressions at the expense of readers. Sure, B/R isn’t the only website to run auto-start videos but they are everywhere, completely unrelated to the content I am reading and so small that it appears intentionally difficult to exit out of: 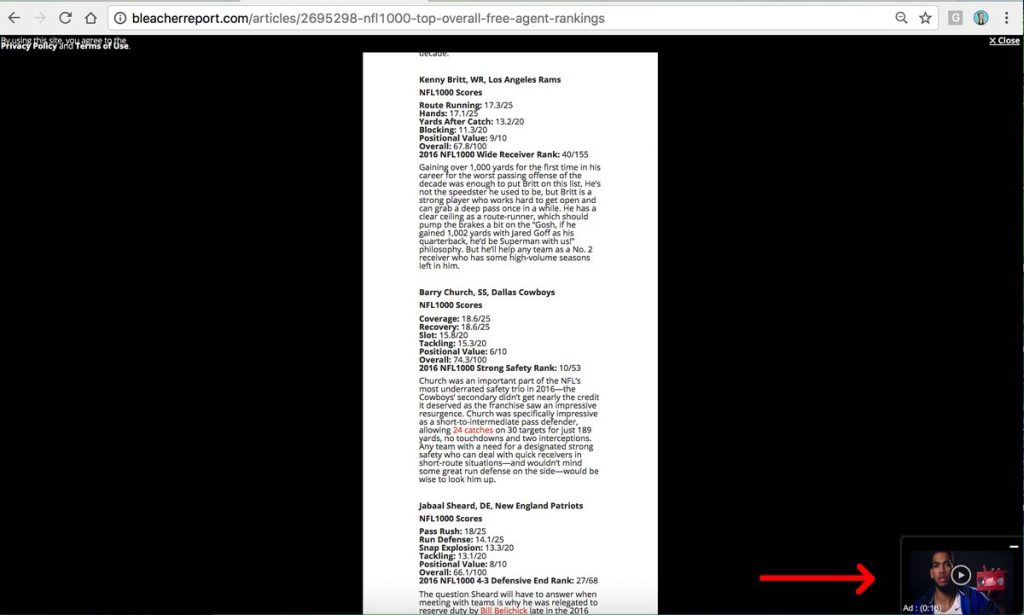 What angers me so much about Bleacher Report’s recent moves is that it had become a website I’d really grown to like and respect over the years after an inauspicious start.

When it launched in 2007, Bleacher Report was a joke in the sports industry with its Wikipedia-like “open source” model, gaming Google’s search results to boost page views and slideshow upon slideshow of message board-level content.

At the time, Bleacher Report used its model that gave young writers an opportunity to get published as a shield against criticism.

Just when it appeared Bleacher Report was going to be laughed off the Internet, it made drastic changes to build its credibility — starting with the hire of Kaufman. B/R instituted a writer program in which people had to get approved to write for B/R and went through an actual editorial process.

And after it was purchased by Turner for a mind-boggling $175 million in August of 2012, Bleacher Report started hiring respected journalists away from big-name competitors like Mike Freeman (CBSSports.com), Howard Beck (New York Times) and Ric Bucher (ESPN).

As I noted on Twitter, most media companies start by creating quality content and then try to figure out how to monetize it; Bleacher Report had done the opposite. And while I found that mildly depressing as a journalist, I respected the business acumen behind it:

A lot of people laughed at Bleacher Report for building a site around monetization 1st and content 2nd. Well, look who’s laughing now…

Bleacher Report co-founder Dave Finocchio responded to my tweet with this:

@LostLettermen yes, it was the best and I would argue only available path to have a chance of achieving our long-term content/product goals

By 2015, Bleacher Report was all grown up and one of the biggest success stories in an otherwise-floundering media industry. In January of that year, it recorded a single-day record of 8.8 million unique visitors and was the fifth largest sports property on the Internet behind only ESPN, Yahoo, FOX Sports and the NFL.

But it’s easy to abide by high-minded principles and quality journalism when you are flush with cash; it’s a lot more challenging once your budget gets squeezed.

And when that apparently happened in recent months at Bleacher Report, editorial staffers were thrown overboard with little regard as the company had been criticized for doing in the past.

Meanwhile, Bleacher Report is chasing eyeballs on social platforms with video content like this that is nothing more than pictures, words and background music compiled into a clip to artificially inflate reach and shareability:

And then there are the “original series” that are easy to sell to advertisers but leave people like me wondering if Bleacher Report is a sports media company or a cartoon network.

Meanwhile, Bleacher Report has shut down its writer program — so much for giving young writers opportunities to get published — and burned a lot of former writers that are unhappy with the way they left the company.

While Bleacher Report has maintained its higher-profile writers like Freeman, you can bet your ass that long-form features and original reporting like this is the next thing on the chopping block if B/R keeps trimming costs. After all, why pay Freeman to write about teams being interested in Johnny Manziel when they can simply aggregate his reporting for free like B/R did with Peter King?

Because as Bleacher Report has just shown us, it’s just like any other ruthless tech company in which people, principles and credibility are all disposable.