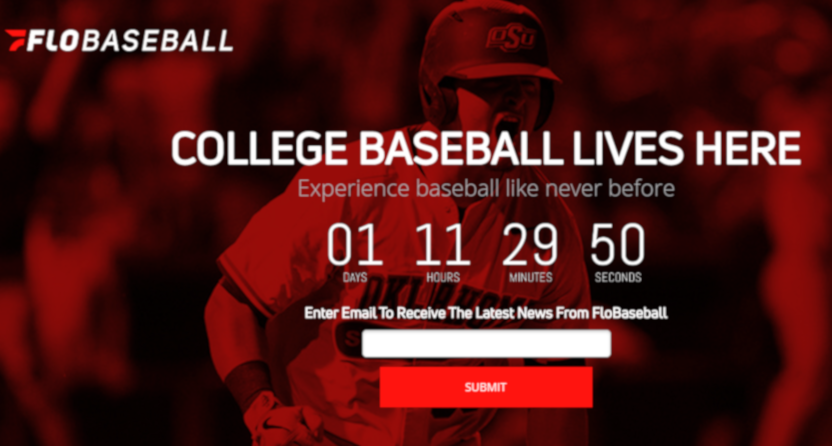 We’ve seen FloSports amping up their sport-specific offerings recently, most notably with FloBikes offering 75 events and more than 300 days of racing this year (plus some big exclusives, like the Tour de France in Canada). Now, they’re launching a new sport-specific platform with FloBaseball. Here’s more from a release:

Exclusive coverage begins with both the Sanderson Ford College Baseball Classic and Snowbird Baseball Classic on February 14. The first match-ups will feature NCAA Division I teams including Oregon State (#25 in USA Today’s Coaches Poll), New Mexico State University, BYU, Gonzaga, Ohio State University, University of Iowa and Kent State. In addition to select early season tournaments, FloBaseball will also feature up to 230 games in the Big Ten conference schedule including the highly-anticipated ACC/Big Ten Challenge as well as games featuring 2019 College World Series runner-up University of Michigan. FloBaseball will also have exclusive action from the Colonial Athletic Association and MEAC Conference in addition to the ECAC Championships. During the first month of live action on the platform, nine of the USA TODAY Coaches Preseason Top 25 will be featured.

“The launch of FloBaseball brings a new and much-needed focus to a previously underserved segment of America’s favorite past time. Baseball fans around the world will now have ONE destination to follow the best amateur players and those who have the potential to become the next professional superstars,” said Mike Levy, FloSports Vice President, Global Rights Acquisition. “FloBaseball will bridge the viewing gap between competitive youth, high school and collegiate baseball that has been either restricted to regional networks or unavailable altogether to baseball audiences. With the ongoing success of our other verticals, FloSports has proven that audiences are ready for sports programming that has been overlooked by major networks.”

This is an interesting mix of collegiate-level rights, from early-season tournaments to Big Ten (in 2017, FloSports picked up rights to more than 1,000 non-televised Big Ten games that were previously on BTN Plus), CAA (FloSports signed a primary rights deal across sports with the CAA last year), and MEAC games. And it kicks off this week, with the Sanderson Ford Baseball Classic (featuring New Mexico, Oregon State, BYU and Gonzaga in Surprise, Arizona) and the Snowbird Baseball Classic (featuring 22 NCAA Division I teams, including Ohio State, Iowa, Pitt and Rutgers, in Port Charlotte, Florida) both beginning Friday. After that, the Round Rock Classic (featuring Stanford, Houston, Tennessee and Texas Tech in Round Rock, Texas) begins Feb. 21, and the Frisco Classic (featuring UCLA, Oklahoma State, Texas A&M and Illinois in Frisco, Texas) begins Feb. 28.

FloBaseball will also feature youth and high school baseball tournaments, including the Connie Mack World Series and the Program 15 Future Stars at Fenway Park series. Further events will be added as the season progresses, with the full schedule at flobaseball.tv. The service also plans to offer “news, exclusive interviews and original content highlighting the next generation of baseball’s rising stars,” and as with other FloSports offerings, subscriptions let you view events from other sports across their network. There’s certainly a decent list of games for NCAA baseball fans to check out here, especially with those early-season tournaments; we’ll see how popular this winds up being.