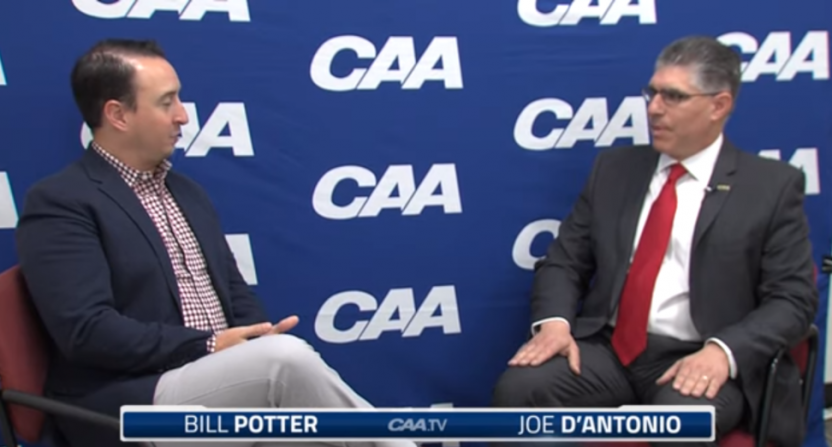 The Colonial Athletic Association has become the first NCAA Division I conference to sign a primary rights deal with an exclusively-digital outlet. There have been recent ESPN deals for the AAC, the Ivy League and even the Big 12’s third-tier rights (non-Texas, non-Oklahoma) that have included a strong ESPN+ component, but all of those moves have included a linear TV component as well. By contrast, the CAA has signed a four-year deal to turn its primary rights over to digital-only FloSports, and it’s reaping a rights fee for the first time as a result, as Michael Smith writes at Sports Business Journal:

The CAA has sold its rights to FloSports as part of a comprehensive college media rights deal that is believed to be the first time an NCAA Division I conference has gone all-digital with its primary rights agreement. The arrangement will have FloSports paying the CAA a rights fee, something the mid-major conference has never had before. Select CAA games were on CBS Sports digital and the Fox Sports Go app last season.

When FloSports started offering a rights fee in the low seven figures, the conference made its move.

“This is going to be a cutting-edge deal,” CAA Commissioner Joe D’Antonio said. “To be honest, for a conference our size, this will be a significant revenue source for all of our schools.”

…“Investment in storytelling is a big part of our model,” said Mark Floreani, FloSports’ CEO and co-founder. “The CAA is a great conference with great content, the kind that often goes overlooked.”

The CAA has been around since its 1979 formation as the Eastern College Athletic Conference South basketball league, but it’s seen a lot of schools come and go over the years. Virginia Commonwealth, George Mason, Old Dominion, and Georgia State are the most recent schools to exit, with VCU leaving in 2012 and the others following in 2013. The College of Charleston came in in 2013 and Elon University joined in 2014, giving the conference its current complement of 10 full members; they also have 10 associate members, with seven of those primarily being in the CAA for FCS football (two more are there for men’s lacrosse, and one for women’s rowing). Some key current conference champions are Maine (football), Hofstra (men’s basketball, regular season), and Northeastern (men’s basketball, tournament), while James Madison won the 2016 FCS national title in football and appeared in the 2017 championship game.

As per the CAA release, this deal will see more than 300 games on FloSports each year, including plenty of football and basketball content:

“The Colonial Athletic Association is excited to announce a multi-faceted video platform highlighted by our innovative and revolutionary partnership with FloSports.” CAA Commissioner Joe D’Antonio said. “As a Conference, we are excited to be working with a partner that is committed to showcasing our exciting events and dedicated to sharing the incredible academic and athletic achievements of our student-athletes and coaches.”

More than 300 games will air annually across the FloSports network beginning in the 2019-20 season. The agreement calls for approximately 50 football games, 140 men’s and women’s basketball contests, and an additional 110 events, including the majority of conference championships to air on the network each year.

This is a pretty significant movement of rights to an all-digital company like FloSports. As mentioned above, conferences like the Ivy League and the AAC have signed deals that will see a lot of their content wind up on ESPN+, but those deals still include a linear TV component. And ESPN+ has a lot of marketing push thanks to the backing of ESPN and Disney, and it has a lot of rights. FloSports has some (most notably local rights for MLS teams D.C. United and FC Cincinnati, plus some college rights for winter and spring championships in conferences like the Big 12 and the Mountain West, and a full primary rights deal with the Division II Southern Intercollegiate Athletic Conference), but there’s still likely a smaller chance that CAA fans already subscribe to FloSports than they do to something like ESPN+.

It also should be noted that ESPN+ comes in at a cheaper price: $4.99 a month versus $12.50 a month for a FloSports subscription. That’s not necessarily saying that FloSports is overcharging relative to what they’re paying out (and it’s notable that in the CAA’s case, the primary payout is the rights fee rather than production costs; the SBJ piece notes the live events will be produced by the schools, which already do that for in-house service CAA.tv), but more that ESPN has a lot of efficiencies from their scale.  A lot of ESPN+ costs are linked into moves the wider company is making for other TV or digital efforts, so the streaming service doesn’t have to pay for everything. (And even with that, Disney reportedly lost $100 million on streaming in Q1 2019 and expects to lose $200 million in Q2; they’re currently trying to build the ESPN+ subscriber base and also use it to test streaming ahead of the Disney+ launch, so they’re fine subsidizing the service at this point.)

But that Disney subsidizing does mean that ESPN+ has a pretty significant current edge against the likes of FloSports and DAZN on a price versus rights front. And thus, moving your sports to a non-ESPN+ digital platform carries higher costs for fans, and possibly creates some blowback there. And even the AAC’s ESPN+ deal has drawn pushback from those upset about sports being on a streaming service rather than linear TV; expect to see that with this move as well.

However, there’s an interesting note in Smith’s SBJ piece that while FloSports has picked up the CAA’s primary rights, that doesn’t mean the complete end to their content on TV. Along with this FloSports deal (which kicks in this fall), they’ve also signed a contract for a package of basketball games on CBS Sports Network. And schools have options to go with local networks for games that aren’t going to be on FloSports or CBSSN, and even perhaps for some that are:

For certain football games that don’t stream on FloSports or air on CBS Sports Network, CAA schools will have the capability of taking them to a local RSN for broadcast. In some cases, games could stream on FloSports and simulcast on a local RSN. That flexibility was important to CAA members who have longstanding relationships with local channels.

FloSports’ MLS coverage this year saw some significant hiccups early on, and hopefully that won’t continue with this new deal. But they’ve increased their rights in a big way here, and they’ve acquired some content that some fans will definitely pay for, especially when it comes to the football games. And as for the CAA, they managed to find a partner who was willing to pay them a rights fee, which will bring some more revenue to their schools. But this does come with extra costs and hurdles for some fans, and some certainly won’t be thrilled about many of their school’s games heading to FloSports.