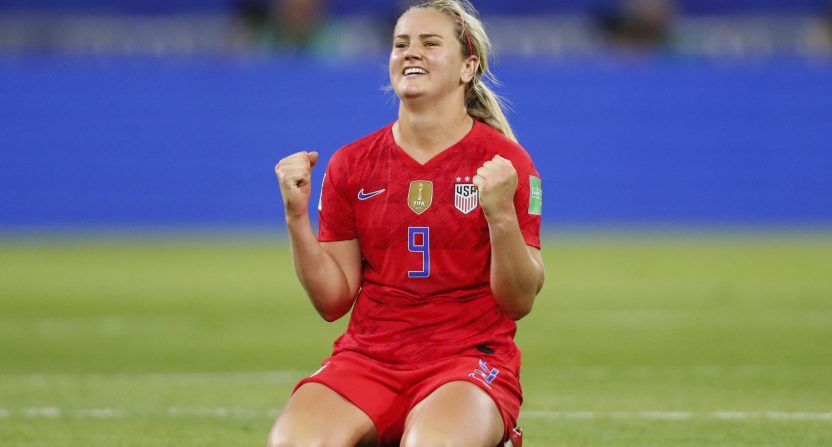 In the monumental matchup between the United States and England, it was the USWNT who kept their 2-1 lead after a disallowed offside goal and a saved penalty to win and advance to the FIFA Women’s World Cup Final.

This is getting to be the case for every USWNT game but the semifinal experienced high viewership marks with Fox Sports reporting that more than seven million people watched the English language broadcast on Fox. As Fox Sports Michael Mulvihill notes, it’s the most watched non-holiday weekday sporting event in five years.

USA-England is the most-watched game in any sport played during a work/school day in five years, dating back to the 2014 Men's World Cup. #fifawwc https://t.co/yWBPAvJehG

Obviously, there isn’t much competition because international soccer tournaments are usually the only thing that can get those numbers during the middle of a work day but it’s still impressive.

Out of home viewership for the game depends on what numbers you go off of. According to Nielsen via Mulvihill, 1.7 million people watched USA-England outside the home. According to Tunity Analytics, it was 7.8 million.

The reason for the large numerical difference is that according to Tunity, Nielsen doesn’t take into account locations that don’t have the sound on whereas Tunity does.

Both methods make some sense depending on how you look at the situation. Most likely, not everyone in a bar is there to watch the game so it’s not really fair to include everyone in your numbers because they may not be looking at the screen at any point. But if the sound is on, they may not be looking at the screen but will have no choice but to listen and thus hear the ads. So to advertisers, listening is better than nothing.

Having said that, considering many sports bars and pubs leave the sound off, Nielsen is cutting off a good chunk of actual viewership who may be watching but for one reason or the other, have the sound off. So if a chapter of the American Outlaws is watching in a packed bar that keeps the sound off, it’s not really fair that they aren’t counted either.

Outside of America, countries from all around the world (especially Europe) tuned in. Europe has the benefit of seeing these games in prime time but it’s still impressive numbers. In England, the BBC had a peak audience of 11.7 million viewers with 50.8 percent of TV’s throughout the country tuned into the game.

More than we could possibly have imagined a month ago: 11.7 MILLION viewers for the @Lionesses game last night, an astonishing 50.8% share of audience and the most watched TV programme of the year so far ? Champions League final on BT had 11.3m #FIFAWWC pic.twitter.com/71OwEztsl8

Even though the all-England Champions League Final between Liverpool and Tottenham was on paid channel BT Sport and thus not an exact comparison to the USA-England game on the BBC, it’s still the kinds of numbers that women’s soccer fans in England probably wasn’t expecting four years ago. And with news that the Premier League may take over the Women’s Super League from The FA, viewership numbers like this can only help.

Even though the English tuned in for the game, that didn’t stop people from other nations from watching. Two notable countries who got high viewership marks was Ireland and the Netherlands. In Ireland, it was reported that 220,000 people watched the game. That doesn’t really sound impressive until you factor in that Ireland’s population is just 4.8 million people and it’s for a tournament they didn’t even qualify for. The fact that 20 percent of Irish TV’s were tuned in shows that USA-England was must see TV.

The Netherlands may have been interested in scouting their potential final opponent because they registered almost two million viewers for USA-England with a 39.2 share. And with a population of just over 17 million people, that means over 11 percent of the Dutch population watched USA-England.

This is a new record here for a women's football match not involving the #oranjeleeuwinnen. #FIFAWWC #ENGUSA #ENG pic.twitter.com/BDSUIcIKib

It’s not just the countries of the teams competing who is watching the Women’s World Cup in big numbers, it’s a bona fide worldwide event celebrated by many people around the world. Expect this Sunday’s final to bring in even more viewers worldwide.