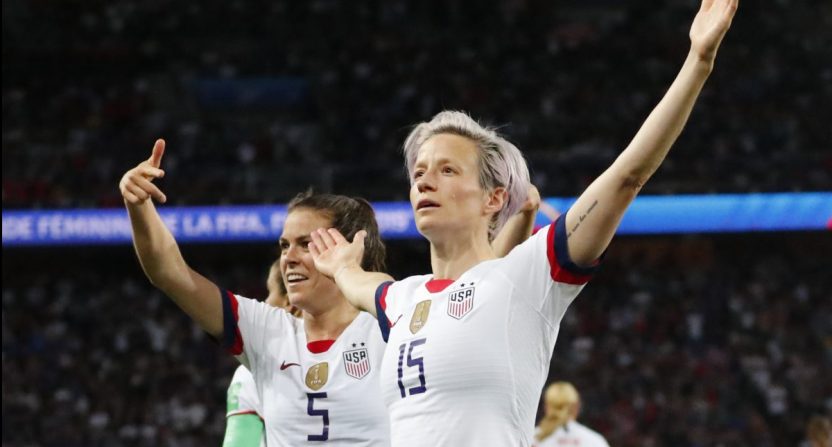 Just like in 2015, the longer the United States remains in the FIFA Women’s World Cup, the higher ratings will be. So for networks like Fox, they not only want the USWNT to go far for home country reasons but also for business reasons.

So when the USA faced France in the quarterfinal, a matchup that could’ve been a final, it not only got big ratings but got the “best metered market rating” for a Women’s World Cup quarterfinal on U.S. television according to Fox Sports.

The @USWNT’s thrilling 2-1 win over #FRA delivered the best metered market rating for a #FIFAWWC quarterfinal EVER on U.S. television ? pic.twitter.com/qp8bvyRK17

In total, Fox got a 4.9 rating on a 14 share for the USWNT’s 2-1 victory over France, a 17 increase over the 2015 quarterfinal. That alone is impressive but Fox had a much more attractive time slot in 2015. The USA faced China on a Friday in the 2015 quarterfinal but that was a prime time game, starting at 7:30 PM ET in Ottawa. This year’s Friday game kicked off at 3:00 PM ET in Paris.

While we don’t know how that translates in terms of viewers, Jonathan Tannenwald of The Philadelphia Inquirer noted that the USA-China game had 5.7 million viewers; so an additional 17 percent would add nearly a million viewers.

The U.S.-China quarterfinal in 2015 drew 5.7 million viewers on over-the-air Fox, for anyone wondering. https://t.co/bYD2zPmcde

Considering this was played on a Friday afternoon, it’s reasonable to expect that many more people would have watched if they weren’t at work. But according to info from Tunity Analytics, a lot of people were out and about watching the United States on Friday afternoon.

Nearly eight million people watched the USA-France game somewhere outside their home and nearly three out of four were male. In addition, as @SportsTVRatings noted, those out of home numbers were comparable to Game 7 of the Stanley Cup Final.

For Tunity these #s were in line w/Game 7 of the Stanley Cup Final. Their theory (and I buy it) is getting out of work to have fun with WWC on a summer Friday is a thing.

Those numbers will only climb the farther USA goes. They face England on Tuesday and if they win, that leads to the World Cup Final next Sunday. The 2015 World Cup Final got 25.4 million viewers. Considering viewership has consistently been higher compared to four years ago, another USWNT final may bring even higher viewership in 2019.