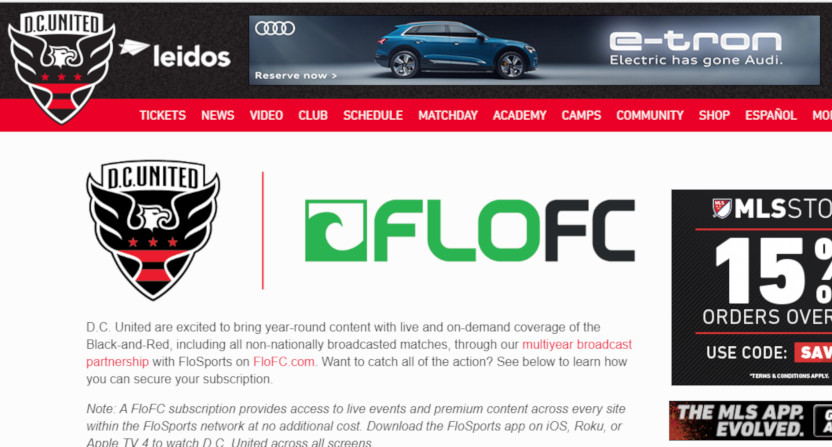 MLS side D.C. United’s much-criticized local broadcast deal with FloSports is over, and it’s over more than three years before the deal was originally set to expire. It’s also over before the team’s final regular-season match, which takes place at FC Cincinnati (the only other MLS team to sign on with FloSports so far, although the company has reportedly tried to pick up others) on Sunday. Now, that game will be broadcast for free on the D.C. United website. Steven Goff of The Washington Post broke the news of the FloSports deal going south Thursday:

D.C. United and broadcast partner FloSports have cut ties after less than one year, a relationship criticized from the start by fans unhappy with paying to watch games via a streaming service instead of TV and upset with technical issues that marred several matches.

According to people close to the situation, the sides have ended their relationship, which was slated to run four years and reap an estimated $12 million in rights fees for United.

D.C. United put out their own statement about this on Twitter soon after Goff’s story:

And they’ve also made the FloSports page on their site accessible to administrators only. A screenshot of the cached version is seen up top.

It’s unclear what that means from a production standpoint (will D.C. United now be hiring their own on-air talent, camera operators and other production staff for this one match?), and it’s certainly interesting to see them pull the plug now rather than at the end of the regular season. But perhaps that’s a way to show fans (many of whom had been highly critical of the FloSports deal, for technical issues, price point, and other reasons) they’re listening, and get some goodwill back with the fans ahead of the playoffs. (The team is currently in fourth in the Eastern Conference and has clinched one of the seven playoff spots; their final regular season game only matters for positioning from a standings perspective.)

It’s very unusual to see a broadcast deal blow up in the first year of four, and that perhaps illustrates just how poorly this was working for D.C. United. But it also won’t necessarily be easy for them to improve on this deal, at least from a financial perspective; FloSports presumably was already paying a premium given their status as a newer and streaming-only company and their limited distribution, so a more standard TV deal may come with a lower rights fee, and that’s to say nothing of any exit fees D.C. United is paying to end this. However, maybe they’ll be more in demand if their playoff run goes well. We’ll see what this leads to going forward, but at the very least, D.C. United’s fans may have an easier time watching Sunday’s game.