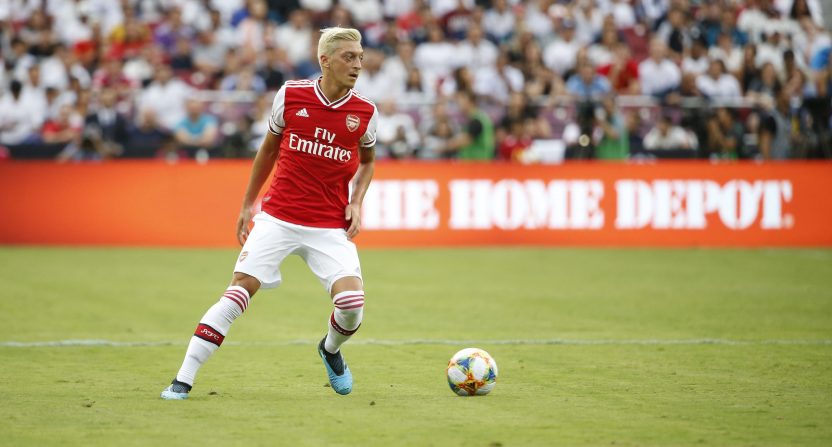 Two weeks ago, Chinese state television broadcaster CCTV and streaming service PPTV refused to broadcast Arsenal’s matches following comments midfielder Mesut Özil made on Instagram criticizing China’s forced internment of over a million Muslim citizens. PPTV has now lifted that ban on showing Arsenal matches (CCTV appears to be continuing it), but the PPTV broadcast of Thursday’s English Premier League match between Bournemouth and Arsenal took an interesting approach to Özil (seen above during an International Champions Cup match this summer); the Chinese commentators simply refused to mention his name. Here’s more on that from Tom Morgan of The Telegraph:

As the match against Bournemouth kicked off, PPTV’s commentary team omitted all mention of the German despite announcing all 10 of his other teammates. The Chinese-language commentators reportedly avoided all mention of his name once during the broadcast, not even when he was substituted in the second half.

…PPTV, which is majority-owned by electronics giant Suning Holdings Group, also reportedly showed Arsenal’s (Dec. 21) game against Everton, but without any Chinese commentary.

Pretending Özil doesn’t exist is certainly one way to go, albeit a rather absurd one. And that’s also how the Chinese release of eFootball Pro Evolution Soccer 2020 (from Japanese publisher Konami) is handling this, simply removing Özil from the game. For his part, Özil hasn’t removed the Instagram post in question, which reads as follows (as per Morgan):

“East Turkestan, the bleeding wound of the Ummah, resisting against the persecutors trying to separate them from their religion. They burn their Qurans. They shut down their mosques.

It’s notable to see Arsenal games return to PPTV, but with a high level of censorship on even speaking Özil’s name. It’s somewhat reminiscent of what happened with the official NBA Turkey Twitter account omitting Enes Kanter from a game recap tweet last May thanks to his criticisms of Turkey’s government. That led to the NBA ending their relationship with the local vendor who sent that tweet, but the Turkish state broadcaster they had a broadcast deal with still declined to show the Western Conference Finals thanks to Kanter’s participation (and said they wouldn’t show the NBA Finals if Kanter’s Portland Trail Blazers advanced there, which they did not). The NBA also got into its own controversy with China this fall over Rockets’ GM Daryl Morey tweeting (and then deleting) support for protesters in Hong Kong, which also led to games being pulled (especially Rockets’ games).

The Özil situation is notable thanks to not only the censorship, but also the stakes. Chinese broadcasting deals are a significant source of revenue for the Premier League, with Morgan mentioning that the league’s PPTV deal alone is worth £500 million ($654.25 million U.S.) over three years. And that’s before you get into all the sponsorship dollars from Chinese companies. So far, the state backlash against Özil hasn’t extended to the Premier League as a whole, but it’s clear that the Chinese state complaints against Özil aren’t going away. And that’s true even with some return of Arsenal matches (minus mentions of Özil) to PPTV.