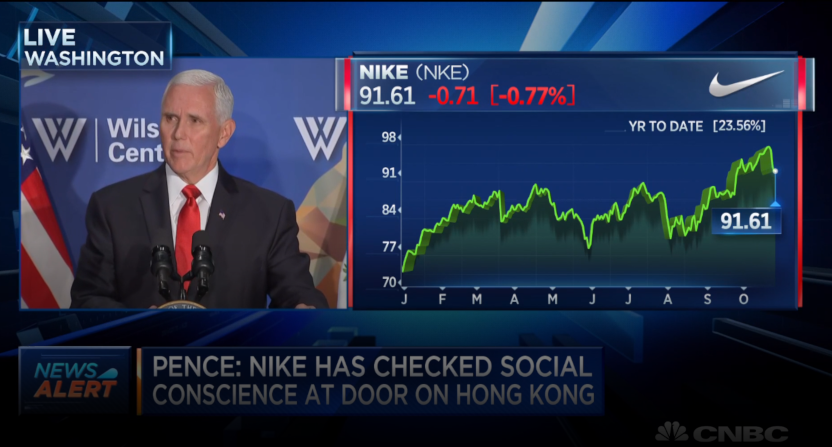 The ongoing NBA-China dispute has seen some interesting new developments. The NBA regular season started Tuesday, and the Chinese decision to stop broadcasting preseason games on state TV channel CCTV extended into the regular season; neither Tuesday’s opening games nor Wednesday’s slate of games were broadcast on CCTV. Some of the games were shown on internet platform Tencent, though, but only hours later, which some have theorized was to prevent images of fans wearing shirts printed with Daryl Morey’s “Fight for freedom, stand with Hong Kong” tweet.

Variety‘s Rebecca Davis has more on what’s going on there:

While Tencent did stream NBA content, six out of the 11 matches appeared only as an image-less score on their platform in real time, with video feeds of the actual games uploaded hours after they’d finished, Chinese culture-watching website Radii noted. Those that were streamed live did so under strictly monitored conditions, with a several-minute delay and cutaways to static images during game play. Unlike in years past, the option of selecting English-language commentary from the NBA’s official TV stream was not available to viewers.

…Like all Chinese tech firms, Tencent is responsible for censoring its content to meet official standards. Live broadcasts pose a problem, as the camera and microphones could at any moment encounter images or audio of political points of view condemned by Beijing.

“Even if Tencent Sports wanted to continue streaming the NBA games, if they really did live-stream an image of a bunch of fans wearing the T-shirts, they’d be strictly ordered to stop,” a sports commentary on Weibo explained.

However, despite all that, Davis notes that Tencent said “25 million people tuned in” for Tuesday’s Lakers-Clippers game, which beats the previous record of more than 21 million they announced for June’s Game 5 of the NBA Finals (the second-to-last game) between the Toronto Raptors and the Golden State Warriors. It’s unclear if that’s average audience or peak audience, but it certainly is a big number, which helps explain why the NBA has been so eager to make a push into the Chinese market. (For comparison, June’s NBA Finals averaged around 13 million U.S. viewers for each of the first four games and between 18 and 19 million viewers for each of the final two.)

But the tensions between the NBA and China don’t seem to be dying down, and a couple of comments may add new fuel to the fire. On Tuesday, NBA on TNT analyst Shaquille O’Neal expressed support for Morey on air, saying “Daryl Morey was right” and defending free speech. And on Thursday, U.S. vice president Mike Pence weighed in in a speech at the Wilson Center in Washington, D.C., ripping Nike and the NBA and saying the NBA is “acting like a wholly owned subsidiary of the authoritarian regime,” as per CNBC’s Dan Mangan:

“Some of the NBA’s biggest players and owners, who routinely exercise their freedom to criticize this country, lose their voices when it comes to the freedom and rights of other peoples,” Pence said in his speech.

“In siding with the Chinese Communist Party and silencing free speech, the NBA is acting like a wholly owned subsidiary of the authoritarian regime,” the vice president said.

Pence also said, “Nike promotes itself as a so called social-justice champion, but when it comes to Hong Kong, it prefers checking its social conscience at the door.”

“Nike stores in China actually removed their Houston Rockets merchandise from their shelves to join the Chinese government in protest against the Rockets general manager’s seven-word tweet: ‘Fight for Freedom, stand with Hong Kong.’”

It’s not necessarily surprising to see that position from Pence, as U.S. president Donald Trump weighed in on this earlier this month with similar criticisms of the NBA (and particularly of coaches Steve Kerr and Gregg Popovich, who have both been critical of him). But it’s interesting to see a high-ranking U.S. government figure again commenting on the China situation, and doing so in a way that’s unfavorable to the NBA. That’s a little different than their actions in some past disputes between U.S. leagues and foreign governments, such as when they used a trade treaty to override the Canadian anti-simsub CRTC ruling to help out the NFL (and won praise from Roger Goodell for doing so).

In any case, the comments here certainly aren’t going to settle this dispute down. And for the moment, at least, it looks like the NBA’s games are going to be shown much less immediately  and prominently in China than they were before this all flared up. We’ll see where it goes from here.