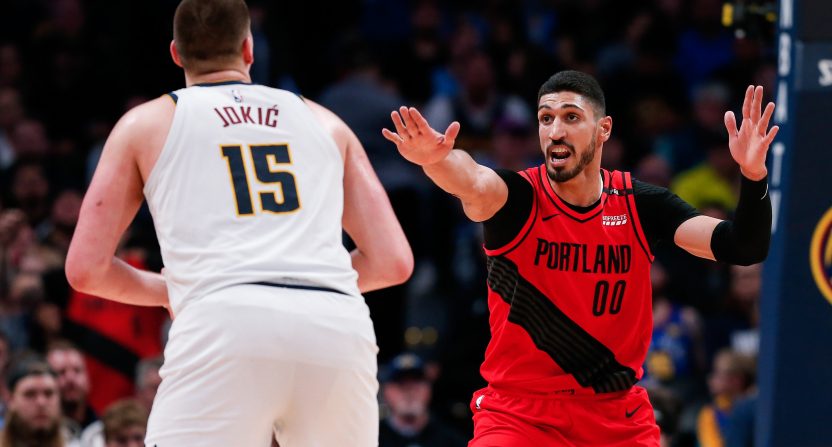 After Portland Trail Blazers center Enes Kanter pointed out that the official NBA Turkey Twitter account used an NBA tweet but omitted him in a sign of deference to the Turkish government, the NBA announced that they have ended the relationship with the Turkish company that ran the account.

Kanter has been a man without a country for the past few years. Kanter is one of the most vocal and most high-profile critics of Turkish president Recip Tayyip Erdogan who by controlling the media and jailing anyone who speaks ill of him, is increasingly turning Kanter’s native Turkey into a dictatorship.

After supporting Turkish preacher Fethullah Gulen and the Gulen movement that was meant to teach tolerance and promote education, Kanter has had his Turkish passport canceled and he’s now unable to leave the United States for fear that he could be sent to Turkey and be thrown in prison or be killed for going against Erdogan.

As a result, Kanter is not talked about within the country and supporting him could result in jail time. And as was the case last night, the official NBA Turkey Twitter account, @NBATurkiye, avoided to mention Kanter scoring 15 points and getting nine rebounds in the Blazers Game 2 win over the Nuggets.

What a messed up country lead by #TurkishDictator @RTErdogan
Only Turkish player out here tonight, and the official @NBA for Turkey @NBAturkiye is censoring me. They dont show blazers games in Turkey. The government controls people,this a problem. How can official NBA allow this pic.twitter.com/Zvny0NwF8C

This follows something else that happened to Kanter during Game 2 as a Nuggets fan told him to “Go back to Turkey,” fully knowing he cannot. Kanter responded in a rather diplomatic way reminding those of us in America to “Be grateful for the Democracy and Freedom we have here” and that he’s not able to go back to Turkey because he wants that same thing in his country.

I wish I could go back to Turkey to see Family ?
But I chose to support Democracy, Freedom and Human rights,
I am grateful for most Americans supporting that right. @nuggets take control of your fans.
This is hurtful ?
Be grateful for the Democracy and Freedom we have here. https://t.co/SMGu9j3qc4

After receiving support from the NBA and the NBPA, deputy commissioner Mark Tatum explained that not only has the local vender been released from operating the Turkish account, he reiterated that fans in Turkey can watch all playoff games on NBA League Pass and NBA TV International. Kanter expressed his appreciation for the league and players association for their support and action.

I can’t thank @NBA enough for making the right move by terminating their local Turkish PR person who censored me during playoffs on the @NBATurkiye account
Thank you @NBA and @TheNBPA for standing up for Human Rights, Democracy and stand against the dictatorship#DictatorErdogan https://t.co/yvJETLhfAG

When a sports league or team has a worldwide presence, they’re likely to have location specific social media accounts. And if that’s the case, it’s important to have a local presence for a location specific social media account. You’re more connected with the majority of your followers when you’re really in the area and can tailor content specifically for them. In a situation like this, it might be best for someone outside of Turkey to run the account and avoid potential political pressure from Erdogan.