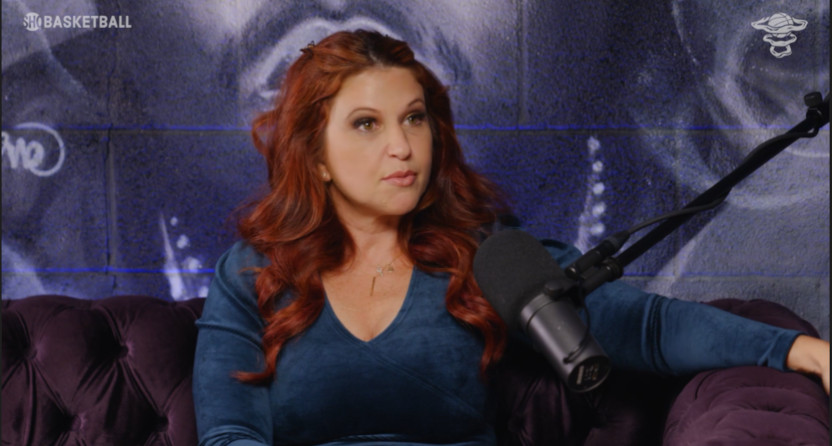 We now know what’s next for Rachel Nichols. Nichols was pulled from ESPN programming last August following a year-plus of reporting and discussion over Nichols’ 2020 comments on Maria Taylor in a phone conversation that also wound up recorded on ESPN servers, the internal and external sharing of those comments, ESPN’s own actions in the wake of that (including replacing Nichols with Malika Andrews as the NBA Finals sideline reporter for ESPN/ABC)  and more. She officially left ESPN this January after reaching a settlement over the year left on her contract, and she’s now landed with Showtime Basketball. Here’s more on that from a Showtime release:

SHOWTIME Sports® announces veteran journalist, host and NBA analyst Rachel Nichols is joining SHOWTIME Basketball, the fast-rising content vertical that features edgy, authentic and compelling content from every corner of the sport. As both a host and producer, Nichols will contribute to multiple programs and projects from SHOWTIME Basketball across multiple platforms. The announcement comes as SHOWTIME Basketball’s successful video podcast ALL THE SMOKE WITH MATT BARNES AND STEPHEN JACKSON drops a new, revealing interview, her first sit-down since her 2021 departure from ESPN, where Nichols opens up about her journey in sports media and what has led to this next chapter in her expansive 25-year career.

Credited as one of the architects of today’s NBA studio television landscape, Nichols will contribute to SHOWTIME Basketball’s premium, award-winning storytelling as she bolsters a group that features Kevin Garnett, Paul Pierce, JR Smith and King of NBA Twitter Josiah Johnson.

“We are delighted to welcome Rachel Nichols to the SHOWTIME Basketball family,” said Brian Dailey, Senior Vice President, Sports Programming & Content, Showtime Networks Inc. “Rachel brings unmatched journalistic credibility, great familiarity with our roster and a work ethic that will take us to another level.”

“I’ve been so fortunate to live my dream job alongside some of the best journalists in the business for more than 25 years, and this new development deal with SHOWTIME Sports gives me my most broad playing field yet,” said Nichols. “They’ve asked me to produce, create and host new sports programming across platforms, working alongside Hall of Famers, multiple guys with championship rings and an uber-creative team behind the camera. We’re going to have so much fun.”

Showtime shared Nichols‘ All The Smoke interview (she’s seen above during that) with AA in advance of its publication. The full interview is now available:

To start with, Nichols talks about joining Showtime: “I am so thrilled. For 25 years, I have gotten to do what I love as a job, which is also kind of crazy in and of itself. And to have this next step be with Showtime Sports, to get to work with crazy, cool, talented people I admire and respect both in front of and behind the camera, I’m so excited to join you guys.”

She then addresses her departure from ESPN:

“It all started really good a few years ago. We can go back to 2019, three years ago. ESPN gave me a new contract, I’d already been there with The Jump, and in the contract was that I was going to host the NBA Finals. And you guys have known me for years, I have covered this sport for decades, the idea that I was going to host the NBA Finals, that was my dream job. That was going to be my first time doing it. It just meant the world. I mean, I called every executive involved personally to thank them. I was just so, so excited.”

“They put everything in writing in the contract, they put out a big press release about it. And one of the things I asked for in the contract was that any pregame show I did would be a continuation of our daily show, The Jump. Because it was something we started together that I was so proud of, and I just also didn’t want any confusion. There’s a lot of politics at ESPN. And I knew that the NBA Countdown job was still open, and I didn’t want anyone to think that I was trying to horn in on NBA Countdown. I wanted to stay with The Jump, it was important to me. And I thought that making that distinction would really help things.”

“And Maria Taylor ended up getting the NBA Countdown job. I really wanted to make an effort to welcome her, to open my door to her. I sent her flowers when I got the job because I was really, really happy for her.”

Jackson then asks “What changed on how you felt in the workplace?” Nichols says “Things got complicated later that season. You all know, it was 2020. We had a pandemic. There was the tragic murder of your friend, George Floyd. There were a lot of difficult conversations with this country looking itself in the face and seeing what had to change, what had to be different. And The New York Times did an expose in July of 2020 on racism at ESPN and the lack of opportunities for people of color. And the executives at ESPN said, I think, about what people would expect, ‘We’d like to give people more opportunities, we’re continuing to grow,’ all of those things.”

“Around that same time, I got a phone call asking me would I step aside for Maria to host the NBA Finals and have me go back to being a sideline reporter. They stressed it was my choice, they weren’t telling me to do this, because it was in my contract. But they were putting a lot of pressure on me. I was being told ‘Well, you’re not a team player.’ Which any woman in business knows is code, right? Women are supposed to be kumbaya, and team players, and helpful, and men are aggressive sharks, and all that? I just felt like ‘Hey, I worked so long, decades for this job. I have done everything that was asked. We put on some great shows leading up to the playoffs. And I wanted a chance to do it.”

Nichols then goes through discussion of leaving for the bubble and the new equipment she was using there, which is what led to her call being recorded and transmitted to ESPN headquarters (where it was eventually shared internally and then leaked externally).

“I didn’t know that if you leave a particular app running in the background that the line from my hotel room, looking into my hotel room, to Bristol, would stay open. So I thought I was done for the day. I did the things you would do on your first day in a hotel room, I spent hours unpacking, called my husband, talked to my kids, called some friends, talked to my doctor.”

“Unfortunately, that entire time, nobody back at ESPN told me there was an open line to my hotel room and anyone who looked at the feed could see me. No one shut it off, decided ‘Oh, she clearly doesn’t know she’s being watched unpacking, doing all these other things.’ And at least one person decided to just sit and watch and start spying on me like I was their own personal television show. And when they heard something they thought was juicy, they picked up their cellphone and they started recording my conversation.”

The full interview with Nichols is worth a watch when that episode is published. But that above discussion of her personal context for those remarks is particularly notable. Much of this had been out there in some form or fashion; for example, there was a lot of reporting on Nichols’ contract specifying her NBA Finals hosting role, and ESPN promoting that publicly when she signed that contract. But her particular on-the-record discussion of it is new.

And it’s certainly valuable to have Nichols’ on-the-record perspective there. Viewers can factor that into the wider analysis of what she said, how it was seen (in particular, it’s significant that she is admitting to her own error in leaving the app running, which should forever close the door on the “hacking” criticisms some people floated, but does still raise the questions she cites about the ESPN employee’s decision to watch and record it), how it was perceived, and what it led to.

Nichols’ comments here don’t make her immune from criticism for what she said, but they do illustrate her side of that controversy in a more on-the-record way than what we’ve seen to date. And viewers can still come to their own conclusions on her, on Taylor, and on ESPN’s handling of the whole situation. But regardless of where they land on that, Nichols’ on-the-record comments on it should be considered.

As for her new job, the Showtime Basketball brand includes a wide variety of content. That includes video podcasts like All The Smoke through documentaries like Kevin Garnett: Anything Is Possible, Quiet Storm: The Ron Artest Story, Shut Up And Dribble, NYC Point Gods and more.

The documentaries mostly air on Showtime, both on linear and on its standalone streaming service (which is newly possible to bundle with corporate sibling Paramount+), while many of the podcasts are available for free on the Showtime Basketball YouTube channel and elsewhere. It will be interesting to see just what Nichols does with Showtime Basketball And it will be interesting to see what reception she gets from the NBA world now that she’s taken this new role.