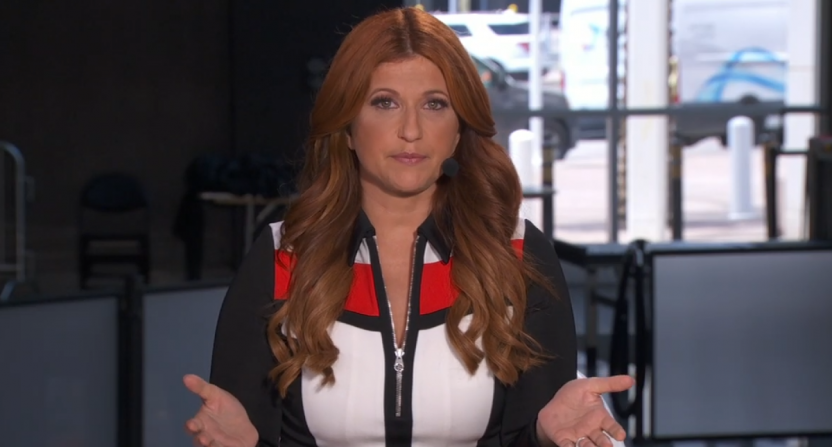 Months after her last appearance on ESPN, Rachel Nichols is now officially gone from the network. In August, ESPN pulled Nichols from NBA programming and canceled her show The Jump, which was later replaced by the Malika Andrews-hosted NBA Today. That came after a July New York Times piece detailing the comments Nichols made to LeBron James advisor Adam Mendelsohn on a July 2020 phone call from her hotel room, with those comments (about Maria Taylor, ESPN’s diversity record, and ESPN’s plan to replace Nichols with Taylor on NBA Finals coverage) recorded on a video feed for her show that was still running. Those comments then were recorded off ESPN servers by an ESPN employee, and they were passed around inside and outside ESPN.

After that Times piece, Nichols offered an on-air apology for her comments (as seen above), and Taylor left for NBC. And Nichols was pulled from Finals sideline reporting before that full August cancellation of her show, which made it seem unlikely she’d appear on ESPN again. But Nichols was still under contract through at least a good part of 2022. That’s now changed; Andrew Marchand of The New York Post reported Tuesday that the sides have now reached a settlement there, allowing Nichols to explore other opportunities effective immediately. Here’s more from Marchand’s piece:

Rachel Nichols and ESPN are officially done, and she is free to pursue a professional comeback, The Post has learned.

The settlement agreement came after Nichols had been exiled by ESPN following the fallout over her private comments about diversity at the network were made public in July 2021.

Nichols had one year remaining on her deal, but ESPN had no intention of using her after the network removed her from its NBA coverage prior to this season.

It’s going to be interesting to see where Nichols goes from here. She’s been in sports journalism since the 1990s, starting as a newspaper writer for The Fort Lauderdale Sun-Sentinel and then The Washington Post, then joining ESPN in 2004, moving to CNN in 2013, and returning to ESPN in 2016. She has a background covering a wide range of sports over the years, and was one of the most prominent figures covering the NBA over the past few years. But the saga around those 2020 comments led to a lot of internal criticism for her from other ESPN figures even before the Times piece, including from NBA Countdown personalities, and the publication of those comments led to wide-ranging external criticism of her. So any hire of her at another sports media outlet seems likely to lead to some flak for that outlet. We’ll see what’s next for Nichols.

It also should be noted that while Nichols and Taylor are both now gone from ESPN (as AA’s Ben Koo wrote seemed likely back in July), that doesn’t mean the impacts of this saga are over for the network. A significant part of this whole saga was about ESPN management, both with the initial decision to take the previously-announced Finals role from Nichols and give it to Taylor (which prompted Nichols’ comments here in the first place) and then with their decisions after that video of Nichols comments started circulating internally, including calling the initial attempted leak of some of those comments (to the current, non-lineal Deadspin, which published a four-byline piece calling the leaker an “ESPN creep” and saying Nichols didn’t say anything significant) “indefensible and an intrusion on Rachel’s privacy.”

That Times piece in July detailed ESPN’s various attempts at addressing Nichols’ comments, which did not solve the problem. And ESPN president Jimmy Pitaro’s eventual memo after that piece only raised further questions on when and why they decided to remove Nichols from that Finals role in favor of Taylor. So it’s worth keeping in mind that while the principal figures in this situation have now both exited ESPN, the underlying issues of inconsistent ESPN decisions about on-air roles, inconsistent ESPN discipline (long an issue), and individual ESPN figures leaking specific information to the media all still remain.