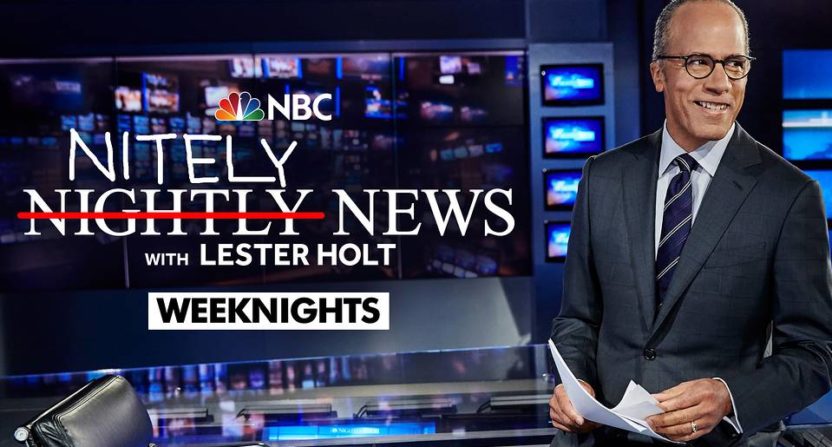 The ratings game is full of gamesmanship, often over how you slice the data (consider NBC’s protest over CBS claiming The Big Bang Theory beat Sunday Night Football), but one of the weirdest moves is retitling a show that you know will be poorly-rated so it doesn’t pull your Nielsen averages down. NBC did just that in June, changing the name of their flagship NBC Nightly News program to NBC Nitely News thanks to concerns about sports events draining audience, and that sparked protest from ABC. However, as The Wall Street Journal‘s Joe Flint wrote Thursday, not only did NBC do that on more than one occasion, ABC and CBS pulled the exact same practice this TV season:

That explains the appearance of “NBC Nitely News,” which apparently aired on the Friday of Memorial Day weekend this year, when a lot of people were away from their TVs. The retitling of “NBC Nightly News” fooled Nielsen’s automated system, which listed “Nitely” as a separate show.

…Walt Disney Co.’s ABC declined to comment. The network, though, groused last month when NBC News intentionally misspelled an entire week of “Nightly News” broadcasts. Altogether, NBC, which is ranked second behind ABC in ratings, has played the misspell card 14 times since the start of the 2016-17 television season last fall.

NBC News said it broke no rules. “As is standard industry practice, our broadcast is retitled when there are pre-emptions and inconsistencies or irregularities in the schedule, which can include holiday weekends and special sporting events,” a show spokesman said.

“It’s a little bit of gamesmanship,” said Bill Carroll, a veteran TV industry consultant. “It’s a practice that happens with a wink and a nod.”

It may be a practice that happens, but it’s a bizarre one; the networks’ decision to do this so frequently, and Nielsen’s decision not to correct their automated system viewing these as different shows (which they’re not; it’s still Lester Holt and crew on the “NBC Nitely News“), means that all of these shows have gamed their ratings to leave out some of the worst ones. NBC’s certainly right that this appears to be “standard industry practice,” though, which makes ABC complaining about it last month pretty funny.

The big question is if we’ll start to see this in sports, though. Will we get First Taek or Undipsuted when Stephen A. Smith or Skip Bayless go on holiday, or when it’s a day with an expected lower-than-normal audience? Will it magically transform into Thursday Night Foosball when the Rams (4-12 last year) play the 49ers (2-14 in 2016)? (That might be more entertaining.) Will ESPN go all Canadian and start spelling it SportsCentre for shows with a big expected drop-off? And we’d throw in a joke about Spake For Yoreself, but it’s hard to have a dropoff when you don’t have an audience in the first place.

The larger point is that these sorts of shenanigans are pretty stupid in the long run. They’re only there to boost networks’ claims about how great their news shows are performing, and to ignore the less-stellar data points, but when everyone’s doing it (albeit at different times), it’s probably not helping all that much. And it makes everyone involved look rather silly. But in a world that regularly sees each network claim things along the lines of “Show X is the fastest-growing with those aged 26.5-27.5 who were born under a water sign and eat cereal for breakfast,” and a world that sees movie trailers pull quotes from random people on Twitter (sometimes even about unrelated movies!), this is probably the next logical evolution of PR spin. Personally, I’m looking forward to the next edition of everyone’s favorite Lord of the Rings-themed debate show, Around The Huorn.