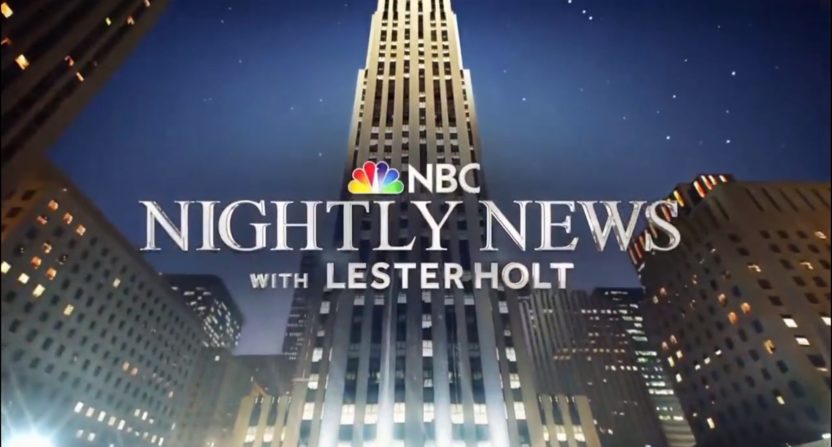 The network news race betweeen ABC and NBC is so fierce that last week both networks pulled some creative if not some sneaky retitling of their programs. It was due to ABC and NBC airing the NBA and NHL Stanley Cup Finals four out of the five nights last week. And because of that NBC decided to retitle “NBC Nightly News With Lester Holt” as “NBC-Nitely-News” for Nielsen.

Viewers didn’t see a change, but Nielsen did. Due to this retitling, NBC Nightly News wasn’t rated thus handing ABC’s World News Tonight With David Muir a win for the entire week. While the newscasts aired in the East and Central time zones, they did not in the Mountain and Pacific so NBC in its infinite wisdom made the change.

World News Tonight is beating NBC Nightly News in total viewership to-date and could win the season for the first time in 21 years. You’d think ABC would be happy with the ratings win last week, but it isn’t. In an angry press release, ABC called out the Peacock:

The Tuesday, Wednesday and Friday telecasts were retitled despite airing at full coverage levels (93%). NBC chose to not include their ratings for one of the biggest news weeks of the year, which included former FBI Director James Comey releasing his prepared remarks and details from his memos to Congress and the American people.

For its part, NBC admitted that it renamed Nightly News, but there was a method to the madness:

“Due to sports, all three evening newscasts would have been rated on the same day only once last week: Tuesday evening,” an NBC News spokesperson told TheWrap. “One head-to-head night does not accurately reflect an entire week of ratings, so ‘Nightly News’ was retitled for the full week.”

The Wrap says this is not an uncommon practice for networks to retitle news broadcasts, they do it during holidays and to accommodate live sports broadcasts.

Retitling for an entire week or longer is also not completely unprecedented. CBS retitled “Face the Nation” for the entire month of August 2016, and ABC retitled “Good Morning America” for the full week of Dec. 26, 2011. That said, no network has ever retitled an evening news program for an entire week since Nielsen records began in 1991.

NBC Nightly News has dominated the evening newscasts dating back to the Tom Brokaw era, but now ABC is hoping to break a two-decade streak. NBC tried to stem the tide with some creative retitling, but it may be a losing battle as it won’t have too many sporting events between now and next season.