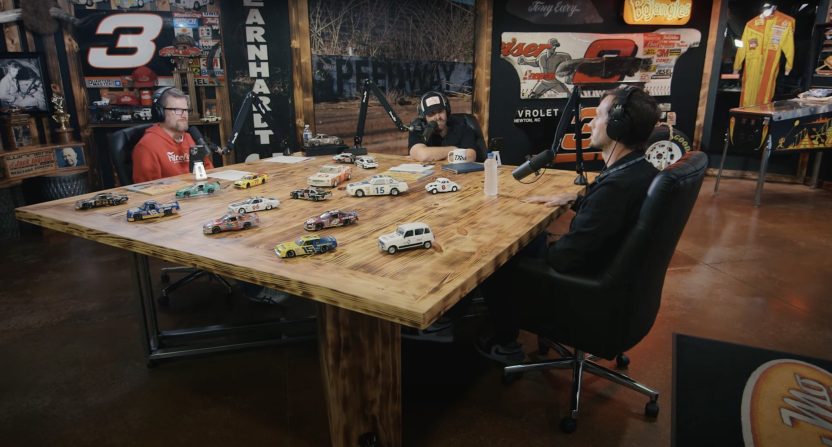 Last week, Dale Earnhardt Jr. interviewed NASCAR Senior Vice President of Racing Development and Strategy Ben Kennedy on The Dale Jr. Download. Kennedy is the one in charge of mapping out the schedules and spearheading new events such as the Busch Light Clash at the LA Coliseum and next year’s Chicago street race. He’s also the grandson of Bill France Jr. and great-grandson of NASCAR founder Bill France Sr. So, Kennedy is probably going to be the top dog at NASCAR someday.

In the roughly 90-minute interview, Earnhardt and co-host Mike Davis went into a number of topics but focused on the scheduling process. Some listeners’ takeaway from the interview was that Dale Jr. was letting a NASCAR executive off easy, given that there’s so much turmoil currently going on within the sport. Namely, the lack of safety in the Next Gen car and the battle between teams and NASCAR about the split on TV revenue coming in.

Earnhardt and Davis spent a good portion of the start of their show explaining their process and why it wasn’t fair to accuse them of going easy on an executive, with the main reason being that those issues people have with NASCAR are not in Kennedy’s department.

“I took offense a little bit,” Earnhardt said. “So, here’s the thing. Before Ben walked into the room, I really was not 100% sure about his stature, position, responsibilities, role in the business and the company. But the more we studied him for, as we do everybody that comes onto the show, and the more he talked and discussed in the room at the table, the more I’m understanding that Ben Kennedy is really just a young guy that’s going through the system.”

Earnhardt gave an example of when he was younger and worked in his dad’s dealership. He worked in nearly every department in the service department and collision center because Dale Sr. wanted his son to get experience and a perspective of what everyone does in case Dale Jr. were to take over the entire dealership one day. Just because he was the boss’ son didn’t mean he had a say in the decisions regarding that dealership. And in Dale Jr.’s mind, that’s where Kennedy is now.

Earnhardt continued, “He is going to one day, hopefully, take over the reigns. And it will be probably department by department before he ever gets to the very top. Where, say, a Jim France or Lesa Kennedy is. So, that’s the issue with really asking him those tough questions about why are we doing this, or safety on the car. Ben isn’t the one with those answers. And Ben isn’t the one today that’s going to go making those changes and steering the ship.”

“And so, it’s absolutely, and I have no problem saying this and if you disagree, that is fine. You don’t have to agree with everything I say. It’s unfair to sit here and hammer him with the big bullet points of the sport and expect him to give us answers that a Steve Phelps is going to give us, or a Mike Helton, or a Steve O’Donnell. Those are the guys that we would ask those questions of and expect…You can ask those guys, Steve Phelps and O’Donnell those questions and expect them to have the answers and expect them to be the ones making those choices. That is not who Ben Kennedy is today.”

“I came in with some hope that I would be able to ask him a few things about the direction of the sport but the more we discussed with him, the more I understood that he’s not the guy to be asking those questions. And I really think I’ll be wasting my time, and his, to try to ask him a question that he really isn’t going to be able to answer.”

It’s not that dissimilar to people who run team or league social media accounts getting nasty tweets from fans of all sports about something that happened that they don’t like. Maybe that’s a stress release for that fan, but all they did was direct something nasty to another human being who’s on the complete opposite end of the corporate ladder than the owner or GM. And not only do these admins not get paid enough to be treated like that, but they might also actually agree with that fans’ complaint and just can’t publicly express that.

Dale Jr. explained that there were topics they discussed that were in Kennedy’s wheelhouse that sparked great conversation. In particular, the process of forming the schedule each year and how they got to the point to have races inside a stadium or on city streets. And in some situations, like the death of his father, Kennedy offered that up unprompted.

Earnhardt and Davis gave listeners an additional peek behind the curtain. One additional reason that they didn’t go hard on Kennedy and gave him the kind of grilling that some wanted them to do, is that a bad first impression will prevent someone from going on his show in the future.

This isn’t to say that Earnhardt has to kiss their butt and never ask tough questions. But given that Kennedy is someone they don’t really know that well, that it’s Kennedy’s first long-form interview, and that he isn’t even the one in the position to be answering those questions, you spend the first interview building a rapport. And then when you have a solid relationship, and he’s in an appropriate position within the company, Kennedy can go on Dale Jr’s podcast and answer some tough, but fair, questions about the issues of the sport.

For example, every so often I interview Brian Herbst, who’s NASCAR SVP of Media and Productions. We usually talk about ratings or the schedule, and various media stuff that’s impacting NASCAR at that time. As much as I would like to, he’s not the one to ask about why drivers are getting concussions in the Next Gen car and interrogate him on how to fix that. His guess to fix that is as good as mine.

I can, and have, asked him about such things as having more races on Sunday afternoon, having new races at places like the LA Coliseum or Bristol Dirt, and how streaming will be a factor in NASCAR’s future. Those are things fans have been very vocal about, and it’s great to have someone who knows what they’re talking about to explain NASCAR’s rationale in doing some of the things they do, even if a good portion of the fanbase may disagree. And if I interview Herbst again, and it’s still unresolved, I’ll probably ask about the TV revenue split among the teams, the tracks, and NASCAR.

There are many people in NASCAR media who cut NASCAR way too much slack and never criticize them. Dale Earnhardt Jr. is not one of those people. He’s willing to praise NASCAR and is willing to criticize NASCAR when he feels is appropriate. Maybe I disagree at times what he praises and what he criticizes, but I respect that he’s authentic in calling it how he sees it, good or bad.

Media cannot see the sport the same as a fan, or even a driver, does. Dale Jr. can’t just go on his podcast and say, “F— NASCAR, they suck, I’m not watching anymore!” If he has an issue with something NASCAR is doing, he’s going to articulate it in a professional way that explains why he feels that way and, if possible, come up with possible solutions to make things better. It might not be what some fans want to see, and maybe he’ll never satisfy that portion of the fanbase. But Earnhardt knows that you “catch more flies with honey than vinegar,” and not doing hostile interrogations of people might make NASCAR more receptive to his criticism and make appropriate changes.

Regardless, the Ben Kennedy interview is a must-listen, and you’ll definitely learn more about the scheduling process.