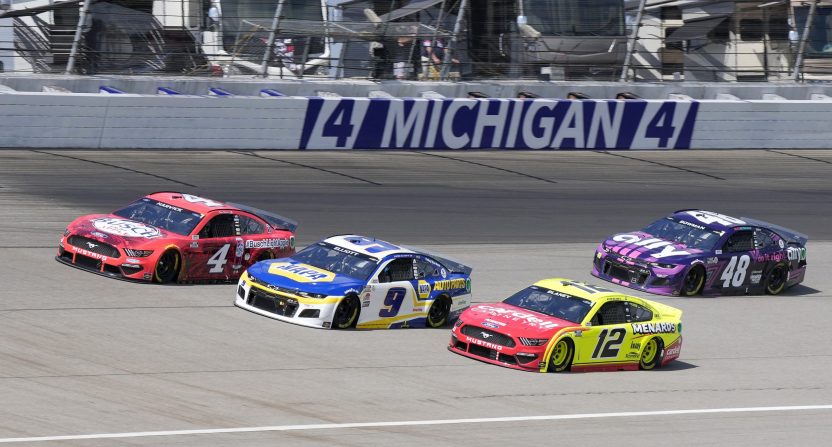 Streaming has been getting more and more of a foothold on the sports and entertainment industry. Especially in sports, there is more of a streaming presence if a league has recently signed a new rights deal.

NASCAR is no exception. The stock car racing sanctioning body last renewed its TV rights contract in 2013. Back then, streaming was limited and putting live sports on an over-the-top (OTT) platform wasn’t an option. Now, things have changed and more people are cutting the cord to go streaming.

For NASCAR, streaming is on the horizon and SVP of Media and Productions Brian Herbst revealed that there will be “some streaming element” when the new rights deal comes into effect in 2025. That being said, potential fears about moving everything to a service like Peacock might be unnecessary.

“Some streaming element will definitely be in place and it will play a larger role in the next deal cycle,” Herbst told Awful Announcing. “When you think about when we did our TV deals back in 2012, 2013, there were really just two different platforms where our content was going to be distributed to… Now, there’s a third bucket and that’s direct-to-consumer or over-the-top platforms. The balancing act for us as a sport is there’s a third economic driver that wasn’t necessarily there in 2012 or 2013, being these OTT platforms.”

“Think about Peacock, ESPN+, Paramount+ under the CBS side, obviously Amazon Prime as well,” Herbst continued. “There’s a third bucket to help underwrite investment by the networks in some of these big sports deals.

“However, for us as a sport, we’re a little bit more sensitive to shifting premier content over to those digital direct-to-consumer platforms just because the penetration level isn’t as high right now in terms of platforms. It’s really just a numbers game for us. For broadcast TV, penetration that’s 120 to 125 million homes, cable TV is 75 million, and the direct-to-consumer platforms are somewhere in the 15 million range.”

While every sport is embracing streaming, NASCAR can’t take the exact same approach as other leagues have. Stick-and-ball sports have sponsors and they’re important in their own right, but NASCAR teams need sponsors in order to have the funding to actually compete.

Streaming has its advantages and might bring in more money for NASCAR, but it also brings less exposure to bring in potential new fans and could be a turn-off for sponsors and fans who won’t pay for streaming. Subscriber fees subsidize viewership to make up for that drop, but that also means sponsors potentially being hesitant on sponsoring a race car or offering less money, knowing that fewer people will be watching.

“If you’re ESPN+ or Peacock on the premium side, then that’s something we need to take into consideration,” said Herbst, “most notably with our fanbase just in terms of their ability to watch our content but also the team sponsorship model as well. The teams sell against the three million viewers that tune into every Sunday afternoon to the extent that [if] that’s compromised in any way via a direct-to-consumer model, that’s something we have to take into consideration. It’s a balancing act. There’s financial stuff in the equation but the viewership piece, long-term, is critical for us as a sport. So we wrestle with that.

“Whatever we do in terms of shifting content, it’ll be done responsibly and with our fanbase at the forefront of that decision-making process.”

With the fan aspect, NASCAR has trended younger in recent years but there is still a sizable older audience more likely to not embrace streaming as much as younger people. That’s why soccer is seen as such an attractive sport for streaming, even if not every soccer fan is on board.

Whatever streaming strategy is put in place for 2025, it’ll be a gradual shift of content. NASCAR is trying to grow and to do so, that still means being on broadcast and cable TV. This is only speculation but the most likely form of NASCAR programming that could go to streaming is potential docuseries and events that aren’t going to attract casual eyeballs in the first place.

Practice/qualifying and the occasional Truck and Xfinity race could move off linear TV because they’re more niche within the NASCAR landscape. If people are diehard enough to watch that now, then they’re more likely to hop on a streaming service to watch as opposed to a casual fan who occasionally watches a Cup race.

At the same time, NASCAR must be careful about putting Truck and Xfinity races on streaming because those teams rely on sponsorship too and it’s already difficult for those teams to get sponsors and survive.

Every change brings consequences, both good and bad, and NASCAR knows that. This next TV rights contract will be one of the most pivotal for NASCAR and the sport will have a lot of variables to consider as they undergo negotiations.