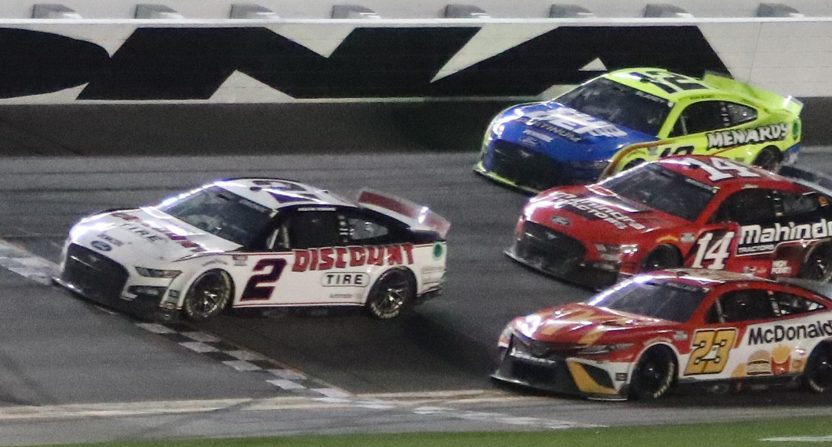 As NASCAR turns the corner on the first quarter of the season, they have much to be happy about on the ratings front. NASCAR’s viewership is up 17% over the first eight races of the NASCAR Cup Series season compared to the 2021 season.

While that 17% rise is largely due to this year’s Daytona 500 starting and ending on time (8.838 million in 2022 compared to 4.830 million in 2021), the positive trend has spread throughout the season as viewership has been up for every race weekend other than in week 2 (Daytona road course/Fontana). The good news isn’t just limited to the Cup Series as Xfinity Series and the Camping World Truck Series viewership have seen slight increases at this point into the season.

NASCAR’s season started off with an incredibly experimental venture in Los Angeles. This might’ve been unheard of a year or two ago but Cup cars raced at the Los Angeles Coliseum. Given the unknowns of racing inside the football stadium, both on and off the track, it would be difficult to truly expect how many people would tune in. At nearly 4.3 million viewers, The Clash at the Coliseum turned out to be slightly better than what NASCAR expected and was huge in getting new viewers to give NASCAR a shot.

“I think the one data point that sticks out for me is that 17% of the viewers that watched that race, they didn’t watch a single minute of NASCAR coverage during the 2021 playoffs,” NASCAR SVP of Media and Productions Brian Herbst said. “So that type of race, in that type of format, in that type of market, if we can draw in more casual fans and more new fans, that’s what we’re trying to do from a scheduling perspective and it was nice to see that proof of concept working out.”

Out of nearly 4.3 million viewers who tuned into the Clash at the Coliseum, around 730,000 people watched the Busch Clash and didn’t watch last year’s NASCAR playoffs. That exposure to new viewers on TV and NASCAR’s strategy of going to tracks that are closer to, or even inside, big cities is a conscious one in order to potentially grow the fanbase and increase ratings.

“The biggest reason that somebody is interested in becoming a NASCAR fan but is not a NASCAR fan is simply the proximity of those NASCAR races to their home,” Herbst said. “So if you are in a metro area of the U.S. there’s a pretty good chance that you’re really close to an NBA team or a football team or a baseball team. Sometimes our tracks are based on how big the footprint is. It has to be, they have to be located a little further away from the metro areas so to the extent that we can bring NASCAR to the backyard of those metro areas that’s a strategy we’ll look to, I think we’ve deployed in the last 2-3 years, and look to continue to be aggressive on that front moving forward.”

Over the past few years, NASCAR has raced in or around highly populated cities. On top of the L.A. Coliseum, NASCAR has regular season races set in or near Austin, Nashville, and St. Louis. That, along with format and configuration changes like the Bristol Dirt Race and Atlanta’s new superspeedway configuration, has helped bring in younger fans. The Atlanta Cup race was up nearly 7% in overall viewership compared to last year’s Atlanta race despite this year’s race going up against Duke vs. Michigan State in the second round of the NCAA Tournament.

While viewership is up 61% among 18 to 24-year-olds compared to the first eight races of the 2021 season, it’s important for NASCAR to be cognizant about not making changes at the expense of scrapping tradition.

“Scheduling changes and getting to those metro areas are two key parts of that strategy [to reach the 18-49 demographic],” Herbst said. “So, younger populations like in Austin, Texas, if we bring NASCAR into their backyard they’re more likely to be a NASCAR fan. Format changes, like Bristol Dirt. Bristol Dirt was the race that 18-34-year-olds were most excited to see on the schedule when it was brought onto the schedule for 2021. But there’s a balancing act between the traditions of NASCAR and some of these new changes, but part of it is to appeal to new demographics that we need to make sure that they continue to increase if we’re going to set ourselves up well for generations to come.”

NASCAR has had a great start to the season and after eight races has been fortunate that races haven’t been impacted by weather. Last year (knock on wood), the Bristol Dirt Race had to be pushed to Monday and NASCAR missed out on a prime opportunity. This year, NASCAR will be racing in the dirt on Easter Sunday in primetime. If it doesn’t rain, the race will no doubt be an opportunity for NASCAR to maximize viewership when the race starts at 7:00 PM ET on Fox as that should provide a nice bump to Talladega the next weekend as well as some other races later in the season.

“I think that we’re set up really well for a successful, really positive year for the end of 2022,” Herbst said. “However, you know more than anybody, that there’s also key events that we need to make sure that we’re clean from a weather perspective. So Bristol Dirt, we expect a positive number this weekend on Easter Sunday assuming weather doesn’t intervene. Talladega, the following weekend, we would expect a really strong number assuming weather doesn’t intervene.”

“We have another incremental broadcast window on the NBC side of the season with Nashville starting to open up the [NBC] season. That used to be on cable, now that’s on broadcast. So that’s another opportunity for pickup there. And then Indianapolis, we ran an earlier start time last year from a scheduling perspective. We’re running a little later start time this year so we would expect an uptick there. So I think that we’re really well positioned for a positive viewership story and obviously we’ve gotten out of the gates really really well. But we need to make sure that…we would pray to the weather gods that rain doesn’t intervene on some of those events.”