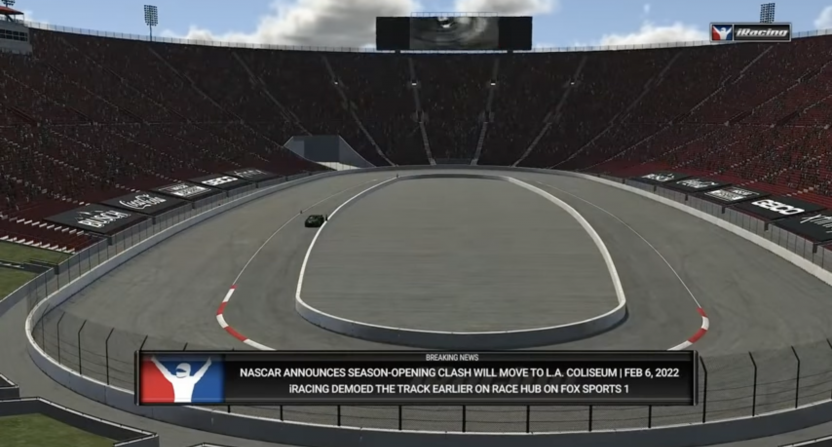 Last week, NASCAR announced a wild “out-of-the-box” idea that not many people could dream of. Next February’s Clash event will head to Los Angeles for a race in one of the most famous sports stadiums in the country.

The Clash at the L.A. Memorial Coliseum is a metaphorical perfect storm for NASCAR. A lot of considerations go into having a race like this and it’s certainly a gamble as an in-stadium NASCAR Cup Series race hasn’t taken place in over 60 years. But it’s one that NASCAR feels is worth taking. And with the Super Bowl in L.A. the week after, NASCAR felt this was the right time to make it happen.

With the NFC Championship Game on Fox the week before and NBC having the Super Bowl the week after, the Clash is what Herbst calls a “storyline event” that will kick off the 2022 NASCAR Cup season and settle perfectly in between the two football games.

Herbst said that in order to avoid any kind of Pro Bowl programming it’s “very likely that we’ll run [the Clash] after the Pro Bowl.” This isn’t a certainty since the Pro Bowl doesn’t yet have an official start time but going off of recent Pro Bowl games, there is a good chance the Clash will be run in prime time.

In addition to the Super Bowl, there were other reasons to have the Clash inside the L.A. Coliseum. For one, because it’s an exhibition race, it’s easier for NASCAR to experiment and have a race inside a stadium if points aren’t on the line.

Another reason, because of its large population, Los Angeles is NASCAR’s “No. 1 market in terms of scale and audience,” so it makes sense trying to have a race in that big of a market. According to Herbst, and from my own personal experience, the number one reason preventing someone from being a NASCAR fan is that there isn’t an event close enough to where they live. A race inside NASCAR’s top market certainly brings things closer for a lot of people.

Now before anyone points this out, Auto Club Speedway is in the L.A. area. Having said that, Fontana is almost an hour’s drive from Downtown L.A., while the Coliseum is in the middle of the city and less than 10 minutes from Downtown. For people who live out in the country, driving an hour to get somewhere is no big deal. But that’s a different story inside a city. Especially one with as much traffic as L.A.

It’s a tough ask to expect a non-fan to spend lots of money to travel, stay in a hotel (if they’re from out of town), and buy tickets to a race they’ve never been to and may not like. Having a race in a city like Los Angeles helps alleviate some of those hesitations for local residents

But L.A. won’t be the first time NASCAR has worked to get races in higher populated locations. Circuit of the Americas is about 20 minutes from Downtown Austin. Nashville Fairgrounds Speedway, a track trying to get on the schedule in the future, is within the city. The closer a race is to the population, the more likely those people will attend a NASCAR race. Maybe for the very first time.

NASCAR feels that these new events have been a factor in recent ratings figures. Currently on a five-race streak (longest since 2013) where viewership has gone up compared to the previous year, NASCAR has seen a slow but steady climb in viewership since their rock bottom 2018 and 2019 seasons.

In 2018, the sport was dealing with the retirement of Dale Earnhardt Jr., and ratings nose-dived. One bright spot in that season was the first Charlotte Roval race, which resulted in a “30 percent swing” from NASCAR’s standard comparison during the rest of that season.

The intrigue of something new sparked interest and since then, NASCAR has made occasional tweaks to the schedule to keep things fresh. Some of that was needed in 2020 for pandemic-related reasons. But going from moving the championship race to Phoenix, to adding dirt to Bristol, and adding tracks like Road America, this has helped bring higher ratings in 2021.

Another factor contributing to increased ratings has been a focus on putting races on Sunday afternoon. Not every Cup race is on Sunday, but it’s something that NASCAR is looking to do as often as they can because it means a big jump in viewership compared to a race on Saturday night.

Off the track, NASCAR has credited its social justice reforms as a factor in not only higher ratings but increased relevance of the sport compared to 2018. From banning the Confederate flag to defending Bubba Wallace after an apparent noose was found by one of Wallace’s crew members at Talladega (which turned out to be a misunderstanding), it was a step in the right direction for a sport that had a troublesome past regarding race.

Since then, many people including NFL players Alvin Kamara and Bernard Pollard Jr. became NASCAR fans. Kamara was hired as NASCAR’s first Growth and Engagement Advisor, while Pollard is known to not only watch each week but also compete in iRacing. Longtime NASCAR fan Michael Jordan became a team owner, partnering with Denny Hamlin and bringing on Wallace to drive the #23 with Kurt Busch joining up in a second car for 2022.

All of this is to say that NASCAR’s strategy of increasing ratings and interest in the sport comes from controlling the things it’s able to control. When Dale Jr. retired and top drivers like Jeff Gordon, Tony Stewart, and Carl Edwards all retired around the same time, NASCAR was left flat-footed on what to do next and ratings showed. While drivers still need to be marketed and resonate with fans, NASCAR can’t control when drivers retire.

But NASCAR can control where it races, when it races, and how its sport is portrayed toward the general public. Next year’s Clash at the L.A. Coliseum will be NASCAR’s latest move to build anticipation. It might work or it might not, but it’s definitely worth trying.