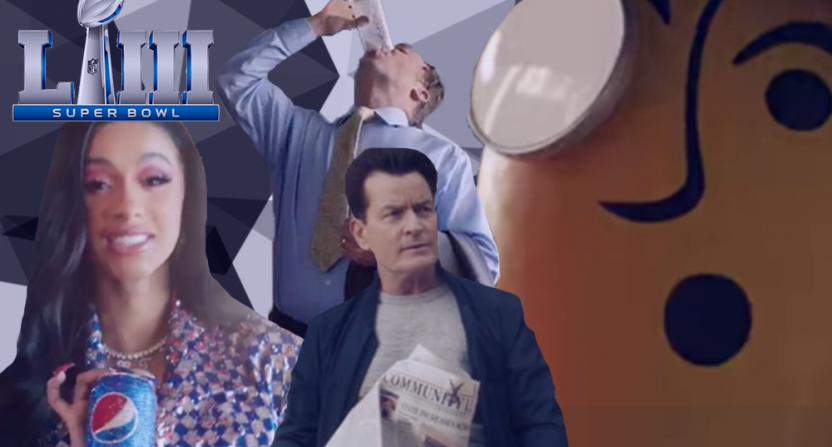 Watching the Super Bowl has become as much about the commercials as it has about the actual game itself. As the New England Patriots (yet again) played for the Lombardi Trophy against the Los Angeles Rams, many in the audience merely saw that as killing time until they got to see their favorite celebrity hawk products that they probably already own.That also means that ad agencies and companies go all-out when it comes to Super Bowl commercials. And while sometimes that leads to very memorable and powerful imagery, it can also backfire in an avalanche of cringe and bad taste. It’s not enough to hire a famous person for your commercial, you have to give them something to do and have it make sense for your product. You can’t just show us inspirational images, you have to provide context. You can’t just do gross-out humor for the sake of it, it has to actually be funny.These are all lessons that go unheeded every year by at least a few advertisers. Let’s find out which ones were the bottom of the barrel when it came to Super Bowl LIII commercials. (Don’t forget to check out the best Super Bowl commercials of the year over here).

https://www.youtube.com/watch?v=nNfv9wsttKEThe robot busts his ass and all the humans could care less. We’re on #TeamRobot. Also, what’s the deal with all the “robots suck” commercials this year? This is why the robot uprising is coming.

https://www.youtube.com/watch?v=qUuFfR6-cxMA classic case of trying too hard to be funny. And why is Kristin Chenoweth here?

https://www.youtube.com/watch?v=Xrgq2CIag6MSo, if we’re reading this ad correctly, the idea of owning an electric Audi is something you can only achieve in death and you’ll never be able to afford or appreciate that kind of thing in your crummy day-to-day existence. Got it.

Stella Artois – Change Up The Usual

https://www.youtube.com/watch?v=IX8TMYRk6_wTHIS is what you bring The Dude back for? What a waste. We’re supposed to be really excited about seeing our favorite characters pop up once more (as well as The Most Interesting Man in the World). But this ad just leaves us feeling bummed out about selling out the characters. Sarah Jessica-Parker and Jeff Bridges might as well be toting the big sacks of money they were paid to show up along with them.

5. Kia – Give It Everything

https://www.youtube.com/watch?v=u_awpNKfjDkThis earnest Kia had makes the list for reasons that require a little context.First of all, the first 30 seconds of this commercial feels like a dystopian nightmare or an dire indie movie that you would never want to watch.Second of all, the idea that we should be showcasing “normal folks” instead of paying celebrities millions to endorse random products every year is a noble one. And if this message was coming from some nonprofit organization or charity it might resonate a bit more. The problem is that it comes from Kia, a company that has literally been paying celebrities millions of dollars to endorse its products during the Super Bowl for a decade now. There was the Laurence Fishburne ad in 2014, the Pierce Bronson ad in 2015, the Christopher Walken ad in 2016, the Melissa McCarthy ad in 2017, the Steven Tyler ad in 2018.Shut up, Kia.

https://www.youtube.com/watch?v=G9xy3cdykJsWe’re gonna guess a lot of people will say they enjoyed this, but we’re pretty sure it’s not because it’s a good ad. It’s actually something of a monument to all of the bad instincts that advertisers have when it comes to the Super Bowl.You start with a decent-enough idea. It’s a common enough experience that people order Coke at a restaurant only to be asked if Pepsi is okay. But then it steps into the worst Super Bowl commercial trope, the “Hey, A Famous Person Showed Up To Do The Thing They’re Famous For” routine.Steve Carell is basically doing Michael Scott before handing it off to Lil’ Jon so he can say “Okay” a couple times before they both make room for Cardi B to show up and…sit down. You can feel the ad executives working out the celebrity cameos to make sure they’re hitting all the relevant demographics (Cardi B for the young folk! Steve Carell for middle-aged white people!). There’s nothing inherently offensive about the ad, it’s just a mish-mosh of ideas and cameos that don’t amount to much.

https://www.youtube.com/watch?v=B6VciSoR1iQFor a company known for it’s pandering Super Bowl commercials, this might just take the cake. Let’s start by acknowledging that it’s a good thing that Anheuser-Busch is using wind energy. No qualms there. But it’s just the self-aggrandizing nature of this whole package that rubs us the wrong way. First, the Bob Dylan song. Second, the dog. Third, the Clydesdale horses. Fourth, the close-up on all that (probably genetically modified) wheat. All of these things engineered to elicit a reaction out of you, whoever you are. And it all just feels so obvious, which robs it of any emotional resonance.We can see the moving parts, the boardroom meetings to discuss demographics, the carefully selected imagery to appeal to baby boomers as well as millennials. All of these Super Bowl advertisements like this are created to make you dance like a puppet, but a really good commercial will camouflage the strings so you don’t see them. In this ad, you can see the strings, the puppeteer, and the entire backstage area full of people in suits grinning about what a good job they’ve done.

https://www.youtube.com/watch?v=LhkcQbhiOiMGross-out humor can certainly work in commercials. Brands like Skittles and Doritos have found success with gross imagery because they find a way to balance it with humor and/or messaging. That’s not really the case here as the chunky milk idea is just plain gross. Watching people drink spoiled milk full of chunks is so off-putting it makes you turn away from the screen. By the time the messaging comes around, it’s too late. You’re just thinking about how gross all of this is.Also, the whole thing felt like a rejected Geico commercial, right down to the setup. So altogether, this ad left us with a bad taste in our mouth (pun intended) and made us think of a different company. Not great, Bob.

https://www.youtube.com/watch?v=f1M2S_4p_6cEverything about this commercial feels like they decided to brainstorm one really good idea but just collected all their first-draft ideas and shoved them together. There’s a lot going on but none of it makes any sense. You’ve got Mr. Peanut doing insane tricks in The Nutmobile (actual name). Charlie Sheen is there for some reason. Then Alex Rodriguez is there for some reason. Mr. Peanut saves ARod from the scourge of kale chips even though he seemed more than happy to eat them beforehand. Then there’s a guy getting his newspaper (in 2019) cheering on the Nutmobile just for the hell of it.We’re deducting extra points for the inclusion of Charlie Sheen, who hasn’t been relevant in years and we’ve all agreed should have been irrelevant far sooner. Really not sure why they thought they needed to include him, but then again this ad is so bonkers it doesn’t seem like they had much of a throughline anyway.Be sure to check out what we thought were the 10 best Super Bowl LIII commercials here.