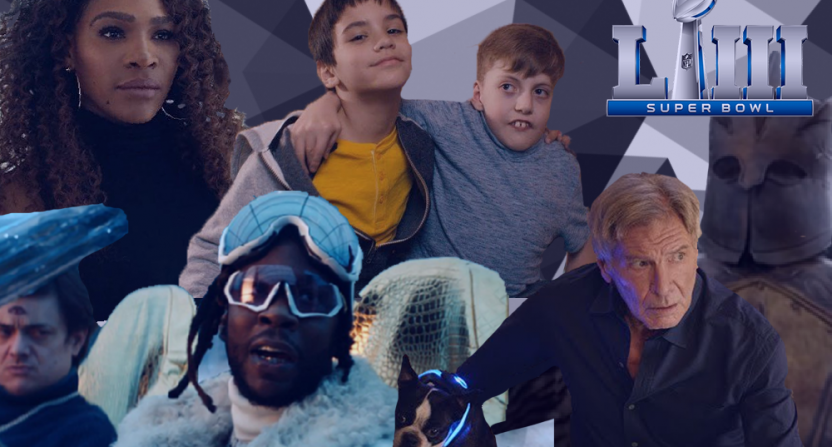 Every year, Americans gather around the television in early February for the culmination of the NFL season with the Super Bowl. The annual traditions are piled high at this point, from the food to the prop bets to figuring out who you’ll be rooting for against the New England Patriots. 2019 was no different in those regards. That’s also true in terms of commercials, the lifeblood of the Super Bowl broadcast. A mixture of high art, heartstring-pulling, and lowest common denominator humor, each year’s series of ads give us a little bit of insight into the state of the economy (remember all those commercials for dot com companies that don’t exist anymore?) and also seem to bring out a multitude of stars, from the A-list (Harrison Ford, Serena Williams) all the way down to the D-list (Charlie Sheen).

We’ve compiled a list of what we consider the ten best Super Bowl commercials from this year. It’s a subjective list, sure to clash with other best-of’s and everyone’s personal preferences, depending on if you’re a dude-bro or a baby boomer. But these were the commercials that, according to us, either elicited the most emotional impact or delivered on promises the best (When you’re done, click here to check out the commercials we thought were the worst).

While using dead celebrities to sell products is frowned upon in most cases, we’d assume that Andy Warhol would actually appreciate this Burger King commercial using football from “Andy Warhol Eating a Hamburger.” It’s a real WTF watch for those who have never heard of the short film or the pop artist. And even for those who do know him, it’s the kind of weird meshing of art, commerce, and curiosity that he’d be all about. And it’s way better than any kind of dumb thing they would have done with their Burger King character.

We’re guessing this is going to be one of the most divisive ads from the Super Bowl. On one hand, it’s a friggin’ ASMR commercial during the biggest sporting event in America. That’s kinda insane. On the other hand, a whole lot of people have no idea what ASMR is, which is bound to lead to a lot of “what the fuck was THAT?” reactions.

If there was one major theme running through the 2019 Super Bowl commercials it was that robots can basically go F off. There were a bunch of ads where the hook was about making technology feel bad or invoking its own mortality. We’re sure there’s a thinkpiece coming soon enough about “what it all means.” In the meantime, this Pringles commercial was probably the best of the bunch. It’s a simple premise with a good bit and solid laugh line. Sometimes that’s all it takes.

7. Bud Light/Game of Thrones – For The Throne

The last thing we ever expected was to put a Bud Light commercial on our Best list, but here we are. Of course, the fact that the commercial was a tacit admission that people are sick and tired of their Dilly Dilly bullshit is strange considering they also ran a separate ad with the same concept. However, kudos to them for at least being willing to job themselves out to The Mountain and Drogon in order to promote Game of Thrones. Not often a brand will allow one of its characters to be murdered in their own ad. We can debate the merits of GOT partnering with such simple mead, but the ad offered the kind of positive bait and switch that you so rarely get in Super Bowl commercials. Well done.

Oftentimes, ad agencies don’t quite find the balance when it comes to incorporating a known celebrity and referencing something they’re famous for. They usually overdo it. Here, we think Olay found the right balance by introducing Sarah Michelle Gellar in a familiar premise (horror movie) and then subverting the tropes in order to showcase their product. There isn’t much more to it than that. Sometimes, you just get credit for nailing your premise.

5. Amazon Alexa – Not Everything Makes the Cut

You could make a solid case that Harrison Ford’s work in this commercial is the most authentic acting he’s done in the last decade (we’re only half joking). The ad itself does commit the Super Bowl sin of piling in a lot of random celebrities to cover its demographics, but it also doesn’t rely on their inclusion to be the only joke. It actually gives each of them something to do and a gag to work with. It’s also refreshing to see Amazon take itself down a peg rather than watch yet another commercial about a company telling us how great they are.

So many Super Bowl commercials try to ram the comedy down your face with an over-the-top moment, a wacky performance, or catchphrase repetition. Here, Bubly has hit on a very simple premise that a lot of people have probably considered at some point. Michael Bublé then does all the work. What could have been a heightening exercise that ends with him trashing the store or yelling about carbonated water instead ends up being funnier. He’s so committed to the notion that it’s pronounced the same as his name that you kinda start to wonder if maybe it should be. We’re still curious where that little girl came from out of the chip aisle with a pad already in hand for an autograph. Stalker?

3. Bumble – Women, The Ball Is In Your Court

Sometimes, all you need is a really engaging, authentic, and powerful personality to tell the story. The brand’s job is to hang back and be ready to throw your logo in there when the time is right. Serena Williams is one of those people, and the kicker, “Don’t wait to be given power…we already have it,” is one that resonates and stays with you after the ad is over. It’s also effective at helping to position Bumble as more than just a dating app, as many might know it.

This commercial walked a pretty thin tight rope, as it could’ve very easily ended up being pretty dumb. But they end up pulling it off thanks to the smart interplay between 2 Chainz (who keeps it straight during his big moment rather than playing for laughs). Adam Scott does Adam Scott things but also reigns it in just enough that he doesn’t take over the ad. In the end, the message of the ad comes through and the “skrrt!” provides a solid laugh moment to make it memorable. As to whether or not Expensify capitalizes on the ad remains to be seen. We’ll probably know how effective it was if we see them back here next year or not.

It takes a lot to break through the clutter and the nonsense to actually elicit real emotions during a Super Bowl commercial. Plenty of companies try to do it and fail because they’re inauthentic or engineered. With this commercial for the Xbox Adaptive Controller, Microsoft understood that it didn’t have to get fancy or show off its technology. It just had to let the kids at the center of the message be themselves. Authentic, real, and emotional, this is how it’s done.

You’ve either have to be devoid of human emotion or one of Microsoft’s rivals to hate this ad. So, Jeff Bezos, basically.

Be sure to check out what we thought were the five worst Super Bowl LIII commercials here.