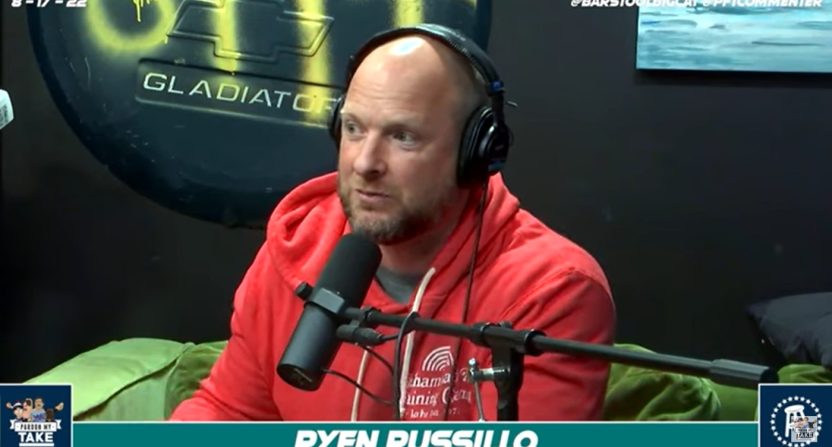 Ryen Russillo and Bill Simmons were criticized for being “tone deaf” when they spoke about the George Floyd protests two years ago. Both hosts have apologized and repeatedly admitted they did a bad job addressing the sensitive social issue on their podcast for The Ringer, and now, Russillo wonders why anyone would let politics enter a sports show.

Russillo joined the latest episode of Barstool’s Pardon My Take podcast with hosts Dan “Big Cat” Katz and Eric Sollenberger (PFT Commenter), and during the conversation, the trio shared their desire to not get political during sports shows.

“Whenever anybody jokes about the political shit, post-everything that happened – I did a bad job a couple years ago,” Russillo admitted. “I would be like, ‘I’d love to talk about it, but there’s no point.’”

The bad job was referring to his commentary shortly after the murder of George Floyd, when the country’s racial tensions were heightened. At the time, Russillo attempted to praise Simmons for The Ringer’s diverse hiring.

“Look at the jobs and opportunities that you’ve given a diverse group, which I know you’re always looking to do,” Russillo said to Simmons during a June 2020 podcast. “I’m not bullshitting, I’m not kissing up to you here. These are facts.”

The conversation and praise for Simmons prompted the Ringer Union to respond on Twitter with actual facts, highlighting the lack of diversity within the company’s on-air talent and editors.

More than two years later, Russillo recognizes that sports certainly ranks low on the hierarchy of important topics in society, but social and political issues are not things he wants to broach during a sports show.

“Now people could say ‘Hey this is more important. This is more important than sports’. Well, no shit! All of this stuff is more important than sports,” Russillo continued. “But you know what? They don’t talk about sex trafficking on (CNBC). Because that show’s about money. Those shows are about finances and all this other stuff. Is it as important as these other horrible things that happen in society? Of course it isn’t. But that’s not what the job is. So that’s where I think like — again this is sort of expanding into a much bigger deal — I’d love to talk about some of this stuff, but I know I can’t win no matter what I do.”

Despite his personal desire to keep the focus on sports for his podcast, Russillo quickly acknowledged there are multiple ways of building a show, saying, “Everybody can do the job however they want to do it.”

For some sports hosts, talking about social or political topics can be irresponsible if they’re not properly informed. Those hosts shouldn’t feel forced to address sensitive issues. But for the hosts who are properly informed, discussing social and political issues, especially when they intersect with sports (which happens often) can be important. Not every person is looking for an “escape” every time they turn on a sports show or game broadcast. Believe it or not, a large portion of the audience is capable of consuming sports without the blinders that the “shut up and dribble” crowd assumes fans are always wearing.