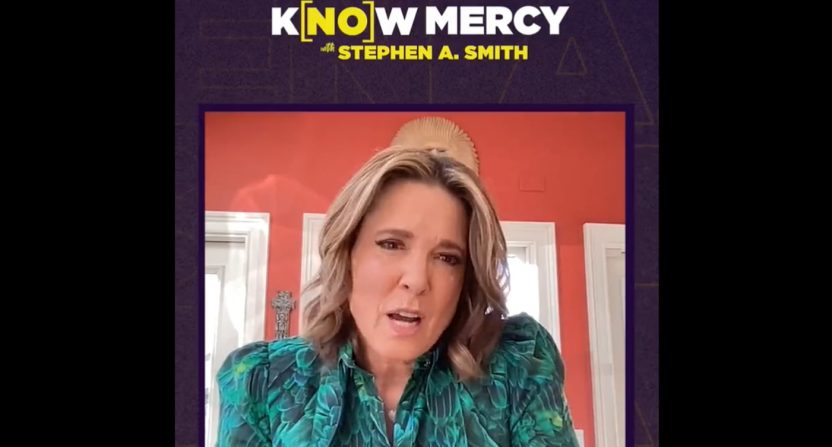 As a sportscaster, director and producer, Hannah Storm has filled a lot of roles in the sports media industry, but maybe none more important than trailblazer.

Storm joined Stephen A. Smith’s latest episode of his Know Mercy podcast for Audacy to discuss ta documentary from her company Brainstormin’ Productions. The six-part series titled Grails: When Sneakers Change the Game attempts to promote diversity on the golf course. But during her appearance on the Know Mercy podcast, Smith also commended Storm for being a role model in sports media.

"Every time I see a woman on television that's doing anything with sports, I just it's super gratifying." @HannahStormESPN talks about pioneering the way for women in the sports media industry. Listen to more on today's episode. pic.twitter.com/jYdxnFthDy

“Honestly, every time I see a woman on television that’s doing anything with sports it’s super gratifying,” Storm said. “Because when I came up I didn’t even have any role models. There weren’t women on TV, you know what I mean, that were doing sports. My role models were kind of like the women that were doing morning TV, which I did that too.”

With a media career spanning nearly four decades, Storm has provided female broadcasters and journalists with that role model she didn’t have. But being a trailblazer also comes with added pressure to ensure she paves the way for other women to continue getting the opportunities she forged. In 2018, the longtime SportsCenter anchor and studio host joined Andrea Kremer to form the NFL’s first all-female commentary team on a broadcast.

“I try to be there, everybody knows I’m here, they have my number, but also with that comes a lot of pressure,” Storm continued. “When Andrea Kremer and I, it was announced that two women were doing Thursday Night Football, you can imagine the reaction, the backlash. She and I felt so much pressure…we were like, ‘if we don’t kill this, if we don’t do a great job, they’re never going to ask anyone else to do it.’ That pressure is what I feel.”

Storm and Kremer have continued to be the NFL’s only all-female commentary team, and this season, the duo provided an alternate feed for two Thursday Night Football games on Amazon Prime. Storm said she learned to move past social media criticism and encourages aspiring sportscasters to do the same, recognizing that regardless of whether she’s great or terrible on-air, there will be a group of people who hate the notion of a woman calling men’s sports.

“I love seeing women in prominent positions in our business,” Storm told Smith. “At the same time I feel like there’s still  a lot of growth in that area. I’m really happy with the production side and what I’ve been able to do. But it is very, very, very small group of people that produce and direct in sports.”