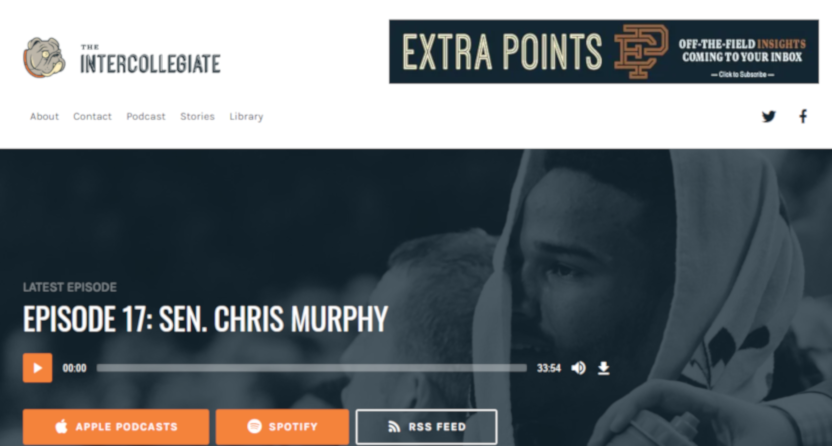 There have been several sportswriters creating their own subscription sites and newsletters over the last while, and one of those sportswriters is now teaming his newsletter up with another independent operation. That would be Matt Brown, who covered college football from 2014 to earlier this year with SB Nation and also launched the Extra Points independent college athletics newsletter last April. Brown’s now merging that newsletter with The Intercollegiate, an independent records-focused NCAA athletics site launched last September by founder and editor Daniel Libit and co-editor Luke Cyphers.

The merger will see Extra Points become the official newsletter of The Intercollegiate (with the two entities combining under a “The Collegiate Model” LLC), and Extra Points will continue its four-times-a-week publication schedule through Substack (with two of those editions being free to all subscribers and two being for paying subscribers only). The Intercollegiate’s own Newsletter of Intent will discontinue publication and redirect subscribers to Extra Points. Libit will also host the Intercollegiate Podcast weekly, with the edition of that podcast out today featuring an interview with U.S. senator Chris Murphy (D-Connecticut) about congressional actions on college athlete rights.

Brown spoke to AA about the merger this past week, saying that teaming up with The Intercollegiate gives Extra Points more room to grow.

“You’re limited in your operational capacity when it’s just one guy. If I’m writing four newsletters a week, and trying to do some podcasting, and trying to occasionally break news, while also dad-ing, you really can’t grow the platform very much. Daniel gives me some editing, he gives me a sounding board, he brings expertise I don’t have, and we’re really philosophically aligned. The Intercollegiate has always been about trying to think really critically about college football. We do it with different voices, but I think there’s this idea that we’re both vocal, we both care about off-the-field issues that shape college athletics, we both care about academic research. It seemed like we could do more together than apart.”

He said that Libit and Cyphers also bring skillsets that complement what he does.

“Bringing in someone like Daniel, and Luke too, you have two people who have great editing experience, a lot of feature investigative journalism experience, and a depth of research knowledge that I don’t necessarily have. I’m a good blogger, that is in my DNA, I’ve been doing it for a long time, and I love blogging about college athletics administration and finances and policy. And now, I’m teaming up with two people and potentially more people who are really good at that 4,000-5,000 word deeper-researched piece.”

“They know more about FOIA (Freedom of Information Act records requests) than I do. They know how to move these stories along. So that way we can reach people who want both; they can get the shorter blogging stuff, they can get the deeper analysis. And we have a couple of bigger research projects in the can. …We have an exclusive interview with Senator Chris Murphy, who’s been one of the big senators involved in collegiate issues. I probably couldn’t have secured that myself. So this should provide people with a better experience.”

Brown said the Intercollegiate was a logical partner, as the work Libit and Cyphers have done aligns with his areas of interest, and fits with the subscription model he feels is necessary to explore interesting issues that aren’t necessarily going to draw in the widest audience.

“If we’re being honest, a lot of the stuff that I love to write about and that I’m really passionate about in college athletics, doesn’t really work well with the other big players in this space because it’s not about scale. I want to just dig deep into nerdy shit. And even at SB Nation, which I think did embrace that ethos a lot, if I went up there and said ‘Hey man, I want to write four newsletters about UConn’s schedule,’ or ‘I want to talk about NAIA legislative issues,’ or ‘I want to interview multiple Division III athletic directors’…if you’re running an outlet that’s trying to make money off display advertising, none of that stuff makes sense.”

“I’ve written almost 100 newsletters, I think, at this point, and I haven’t written a newsletter that’s specifically about Alabama. That’s impossible unless you’re doing it with a subscription model. So I love the editorial freedom, and I love the chance I get to write about the stuff that I’m most passionate about. And I know that there are other people who care about it, I just also know that there’s not 100,000 people who care about it like I do. This way, I don’t need that many.”

And Brown said that subscription model has worked out for Extra Points so far, and he’s optimistic he can take it to a new level after this partnership.

“It’s growing over 10 percent month over month. It’s got about 300 paid subscribers right now, so that philosophically seems good, especially when we’re operating with no sports and when we’re in the middle of a giant recession. It’s been fun, it’s been rewarding, but it’s been a lot of work. I think it’s going to be easier to grow it if I have another person helping me rather than doing it completely by myself.”

As mentioned above, Extra Points will continue with those two free issues a week after this merger, plus two for paid subscribers only. Brown said continuing to provide those free issues is important on a couple of levels; it works for those who enjoy the content but can’t subscribe right now, but it also convinces some people to pull the trigger on a subscription.

“We’re looking at like 15 percent unemployment, and the feedback that I’ve gotten from a lot of people is ‘I love what you’re doing, but I can’t financially support you right now.’ And I want to continue to build an audience and build relationships and share some of this stuff for people who aren’t able to commit $70 for a year, or $7 a month, right now. My hope is as the economy rebounds, I can convert more of those people.”

“Also, my biggest source of paid subscriptions right now is people who convert from free. So I would urge anybody ‘If you’re interested in this even just a little bit, sign up for free, it doesn’t hurt. Read a couple of newsletters and then you decide whether it’s worth it for you.’ I think that’s a better sales pitch than ‘Come give me money right now.'”

Brown said one big goal ahead for the new pairing is to use their records requests not just for their own articles, but for a database that anyone can access.

“The other thing that I’m really excited about, and this is going to be evolving over the launch, is that we want to create a public repository for open records. Right now, if you’re blogging about college sports, if you’re writing about it, you have the USA Today database that tells you a little bit about the top-line salary number for a football coach, what the top-line budgets are. But the PDF isn’t there. And there’s some context that happens sometimes in the coaching contracts; what their buyout is, what their clauses are, if they have to give notice for leaving, how you can dump somebody without cause. It would be nice to have all that information in one place, and then talk about it, and then everyone has the information and everyone is more informed.”

The Extra Points signup page can be found here. The Intercollegiate home page is here.